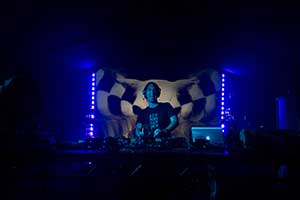 Manchester’s clubs scene has long been hailed as one of the best in the UK, if not the world.

The legacy of the ‘Madchester’ scene of the 1980s, which grew up around the Hacienda night club, is officially remembered in the form of the Fac251 and Paradise Factory night clubs - but the real raves these days take place in secret locations and warehouses across the city, with promoters like Selective Hearing disclosing details of their all-night parties by text message to ticket holders on the day.

The Warehouse Project has dominated the mainstream clubbing scene in Manchester for the last ten years, bringing global names like WHO first to the arches beneath Manchester Piccadilly railway station, then to the gigantic Victoria Warehouse next to Old Trafford, every autumn-winter season. Now back at its more ‘intimate’, 2000-capacity Store Street home, WHP continues to pack in the megastars and sell out almost instantly, but its reign is being challenged by creative and ambitious new venues/promoters like Hidden.

The smaller clubs in town are host to some of the UK’s most innovative promoters. Soup Kitchen is home to residents meandyou., Swing Ting and SOMETHING ELSE. South night club presents the best in hip-hop, dancehall and WHAT. ‘DIY’-feel venues like Aatma and Islington Mill in Salford are booked for a wide variety of independent club nights and one-offs, but many of the best parties, like HomoElectric, don’t have a set home, instead roving about from venue to venue.

Needless to say, Manchester offers its massive student population a host of wallet-friendly club nights, with Joshua Brooks and The Deaf Institute being among the student-friendly venues. Antwerp Mansion in Rusholme, close to the student housing bubble of Fallowfield, is also a regular haunt - literally a huge crumbling mansion given over to festivals and all-night parties.