Some of the highlights across the Scottish festivals calendar, from big raves at FLY Open Air and Terminal V to big summer parties at Kelburn Garden Party and Jupiter Rising

As spring slowly comes into view through blurry raindrops, and as our inboxes begin to bloat uncomfortably with music festival line-ups, we've pulled together this calendar of some of the Scottish music festivals that are more than worth your time and money. Looking for a guide to the best music festivals taking place outside Scotland? Here's our guide.

Various Venues, Glasgow, 3 May
This year’s Stag & Dagger line-up has us excited. With sets planned from Ghostpoet, Ezra Furman, Just Mustard and Holy Fuck, there’s also a whole host of local acts on the bill more than worth your attention; MEMES, GRAVELLE and KLEOPATRA to name a few. There’s also an Edinburgh S&D this year, taking place on 2 May and featuring Dream Wife, The Orielles and Callum Easter. facebook.com/StagAndDaggerGlasgow

Hopetoun House, near South Queensferry, 16-17 May
Much like Terminal V, Edinburgh’s Fly Open Air also runs bi-annually; however Fly run their events outdoors at a pair of different locations. Their autumnal event takes place in Princes Street Gardens, preceded by this springtime party within the stately grounds of Hopetoun House. This year’s first weekend is packed to the gunnels with sets from Peggy Gou, DJ Koze, Nastia, L-Vis 1990, Horse Meat Disco and Or:la among others. flyflyfly.co.uk

Carsphairn Hills, Kirkcudbrightshire, 21-24 May
As the nights get longer and (in theory) warmer, Knockengorroch beckon you out of your house for the first big Scottish weekend of camping this season. Taking place in the beautiful Carsphairn Hills, this year Knock welcome the Afro Celt Sound System, a fusion group of sorts who combine electronica with traditional Irish and West African music. Kel Assouf, Shooglenifty and Mungo’s Hi-Fi will also bring the party. knockengorroch.org.uk

Riverside Museum, Glasgow, 23-24 May
In Glasgow, if you like the idea of a rave on the banks of the Clyde then Riverside Festival have you covered with their gargantuan 2020 line-up. Taking place on the bank holiday weekend, Disclosure, Amelie Lens, Call Super and Afrodeutsche are among the DJ line-up, with live sets expected from Floating Points, Slam (Hybrid) and Fatima Yamaha, and that’s just the tip of the iceberg. riversidefestivalglasgow.com

Raehills, Nr. Moffat, Dumfries & Galloway, 11-14 Jun
With sustainability and an environmental conscience at its heart, having starting its lilfe as an area of the much-missed Wickerman festival, Eden Festival returns to the scenic surrounds of Raehills this June with a drool-worthy line-up. Topping the bill are Little Dragon, fronted by the amazing Yukimi Nagano, who will be celebrating their brand new album New Me, Same Us. Joining the Gothenburg outfit will be Gilles Peterson, Akala and Shy FX. edenfestival.co.uk

Errol Park, Perthshire, 19-21 Jun
Previously described as “wee Woodstock”, Scotland’s family friendly midsummer Solas Festival has been running since 2009. It's back for 2020, in the beautiful acres of Perthshire’s Errol Park with a strong focus on homegrown talent across their line-up. This year you can expect knockout sets from Admiral Fallow, Stanley Odd, Tinderbox Orchestra, Carla J. Easton, Zoe Graham and more. solasfestival.co.uk 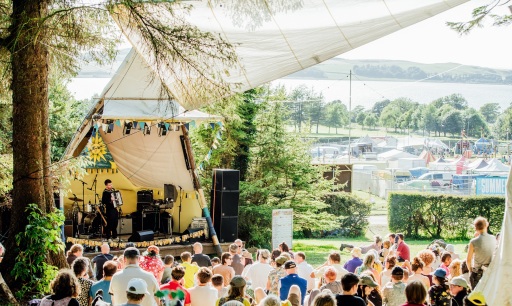 Kelburn Castle, near Largs, 3-6 Jul
We love Kelburn Garden Party so much that in 2018 we started helping with its curation, and this year we’re taking over two days programming – Saturday and Sunday – on the Pyramid Stage with Free Love, Edwin Organ, Squiggles, Slime City, Swim School and Moonsoup all already announced. Elsewhere, Kelburn will welcome Max Cooper for a live AV show, as well as Kampire, Alabaster dePlume and DJ Paulette. kelburngardenparty.com / Photo: Stevie Powers

West Street, Glasgow, 4-5 Jul
Back for another outing in 2020 are the techno-loving team behind Glasgow’s unique Platform 18 festival. Taking place in the city’s south side in a subway station car park beneath two bridges, regular rumblings of trains overhead will cut through performances from the likes of Richie Hawtin and father and daughter duo Floorplan, aka Robert and Lyric Hood. You can also expect sets from Brazilian DJ and Drumcode affiliate ANNA, plus a live set from Berlin’s FJAAK among others. facebook.com/Platform18Glasgow

Port of Menteith, Stirlingshire, 17-19 Jul
While there are lots of child and family friendly festivals taking place in Scotland, Doune is one of the best. With a huge area dedicated to kids and a whole host of shenanigans for you to get up to, your day running around being a giant kid with your kids can be capped off with a good ol' dance to the likes of loveable scamps Belle & Sebastian or the conscious rap of Public Enemy (Radio) and Kate Tempest. dounetherabbithole.co.uk

Rouken Glen Park, Glasgow, 31 Jul-2 Aug
It’s early days in this festival’s existence, but for their second outing in Rouken Glen Park, they’ve got the almighty CHVRCHES and Neneh Cherry headlining, and with the recent addition of Kelis to their line-up they've announced they will commit an entire day to female talent. Obviously there are some men on the bill too, this year in the form of The Flaming Lips, Underworld and Pictish Trail. All in all, it’s sounding pretty good to us. playgroundofsound.co.uk

Jupiter Artland, Wilkieston, nr. Edinburgh, 29-31 Aug
If there’s a better way to say TTFN to a busy month in Edinburgh than leaving the city to immerse yourself in music, art and cultural diversity, then we don’t know what it is. Housed in the stunning grounds of Jupiter Artland, this year Jupiter Rising welcomes music from Auntie Flo, Free Love, Penelope Isles, Hen Ogledd and SHHE, while elsewhere there's artist-led workshops, art and performance, film and moving image. Bliss. jupiterrising.art