As spring slowly comes into view through blurry raindrops, and as our inboxes begin to bloat uncomfortably with music festival line-ups, we've pulled together this calendar of some of the music festivals across the UK and beyond that are more than worth your time and money. Looking for a guide to the best music festivals in Scotland this year? Here's our guide.

[Note: this article was originally published in our March 2020 issue, before the Coronavirus/COVID-19 outbreak intensified across Europe. We'll be updating with any info as and when we get it.]

Sao Miguel Island, Azores, 31 Mar-4 Apr [cancelled for 2020]
If you google ‘Sao Miguel Island’ we promise your jaw will quite literally drop to the floor. When you realise you can go there for a music festival to watch Anna Meredith, Kathryn Joseph, Vanishing Twin and Warmduscher, be prepared to say bye to your bottom jaw for quite some time. 'This can’t be real', you’ll think to yourself, but believe us, it is very very real. An experimental festival, with interactive shows on a beautiful island. Sign. Us. Up. tremor-pdl.com

Sounds from the Other City

Salford, Greater Manchester, 2 May
This year, Sounds from the Other City will celebrate its sweet sixteenth outing in Salford, the 'other city' often overlooked in favour of Manchester. With independent promoters coming together from both cities, SFTOC will bring music, performance and art to a variety of spaces across Salford, with Beak>, Stealing Sheep, Self Esteem and Vanishing Twin leading the musical charge. soundsfromtheothercity.com

Yerevan, Armenia, 5-9 May
Taking over abandoned or deserted spaces for its five-day run, Urvakan – the Armenian word for ghost, phantom or spirit – brings them back to life as venues to be used for discussion, site-specific installations, exhibitions, food vendors and more. The music programme will feature the likes of SOPHIE, Aïsha Devi and Kedr Livanskiy, as well as a special live performance from Vincent de Belleval & Nicolás Jaar entitled Retaining the Energy, But Losing the Image. urvakan.com

Tempodrom, Berlin, Germany, 8-9 May
If you’re anything like us you’ll have been drooling over Pitchfork’s recent line-up announcement for their Chicago festival, quickly doing the maths to see if it’s feasible or utterly ridiculous. If it’s the latter, you’ll be pleased to hear they’ve launched this Berlin version which, like their autumnal Paris leg, is much closer to home and includes Lianne La Havas, Kelly Lee Owens and Nadine Shah in its line-up. pitchforkmusicfestival.de

Victoria Park, London, 22-31 May
It's hard to believe this is only the third outing for the London festival with the amount of big hitters they get, and in 2020 All Points East have for the most part done it again, if you ignore the day The Kooks are headlining (srsly, what?). But the joy of city festivals like APE is you can pick the days which suit you best. For example, the weekend of 23 and 24 May is particularly strong with Tame Impala, Caribou, Kelly Lee Owens, Holy Fuck, Massive Attack, Young Fathers and Neneh Cherry all playing. allpointseastfestival.com

Barcelona, Spain, 4-6 Jun
This year Barcelona's Primavera Sound festival will be celebrating its 20th outing and boy has it come along way since 2001 when Armand Van Helden was the main draw and less than 8,000 people were in attendance. Now attracting around 175,000 people over its three days, their 2020 line-up includes the likes of Pavement, Lana Del Rey, The Strokes, Tyler, the Creator, Caribou, Bikini Kill, The National, Brittany Howard and loads more. Bit different to how it started out amirite? primaverasound.com

Brockwell Park, London, 5 Jun
With its slick branding, exceptional line-up and low cost ticket price, London’s Wide Awake festival has us sat bolt upright! An outrageous list of mega cool people are behind this one, including some of the original founders of Field Day and Dimensions festivals, and for its inaugural year Metronomy, black midi, Minimal Violence, Marie Davidson (DJ), Crack Cloud, Snapped Ankles, Squid and Girl Band are all set to play. wideawakelondon.co.uk

Marina di Ravenna, Italy, 8-11 Jun
What's that? There's a free entry festival taking place on the coast of Italy, right across the water from Croatia, just an hour from Bologna and only two hours from Venice? While it is hard to believe, we promise you it's no word of a lie. And what's more, for a free festival, their line-up is exceptional with Savages frontwoman Jehnny Beth, Les Amazones D'Afrique, Otoboke Beaver and Jessica Pratt all set to play this year. beachesbrew.com

Beekse Bergen, Hilvarenbeek, Netherlands, 12-14 Jun
It’s not that much of a secret these days as the Netherlands’ Best Kept Secret really is worth shouting about. Held on the grounds of an actual safari park you can truly get in touch with your wild side at this festival, with the added option of sleeping in a chalet at its live-in holiday resort! There’s good music at this one too with The National, The Strokes, Maggie Rogers, Weyes Blood and Soccer Mommy all on the bill. bestkeptsecret.nl

Gunnersby Park, London, 12-14 Jun
Back in London and Lovebox are not disappointing this year, with a positively kaleidoscopic line-up. Taking place across three days in West London you can bathe yourself in the euphoric glow of Robyn, get swept up in the breathtaking performance of FKA twigs and revel in the slick flow of Tyler, the Creator. Elsewhere you’ll also find Charli XCX, Kaytranada, Mabel, Hot Chip and our very own Glasgow producer Wuh Oh. loveboxfestival.com 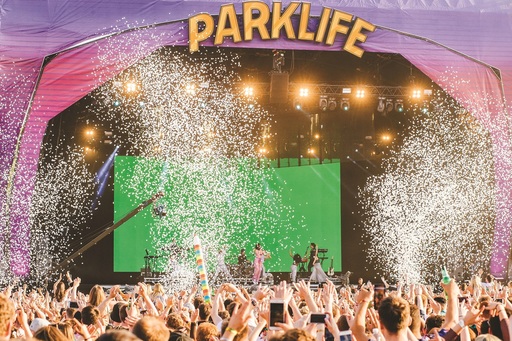 Oeiras, Lisbon, Portugal, 8-11 Jul
Just a 40-minute stroll along the Tagus River from Lisbon’s legendary Pasteis de Belem – custard tarts anyone? – you’ll arrive at Passeio Marítimo de Algés, home to the amazing NOS Alive festival, a great alternative to Primavera Sound if you’re looking to try something new this year on a much more compact site. Expanding to four days in 2020, their headliners are Taylor Swift, The Strokes, Billie Eilish and Kendrick Lamar. nosalive.com

Digbeth, Birmingham, 17-19 Jul
Celebrating heaviness in a variety of forms, following last year's sell-out event Birmingham's Supersonic Festival will this year be relocating to a new home on the edge of Digbeth. Produced by Capsule, for the experimental fest's 16th outing you can expect loud noises from the likes of Blanck Mass, A.A. Williams, Puce Mary, Klein, Lankum and Bada, led by Anna Von Hausswolff. supersonicfestival.com

Jodrell Bank Observatory, Cheshire, 23-26 Jul
In its relatively short existence, Bluedot has had an unwaveringly strong run of top notch line-ups, and for their fifth outing, by continuing to combine music with science and art, they offer something unique in the music festival sphere. For 2020, they’ve a UK exclusive in Björk, who'll perform a special orchestral show, with Róisín Murphy, Anna Meredith and Melt Yourself Down also set to appear, and so much more besides. discoverthebluedot.com

End of the Road

Larmer Tree Gardens, Wiltshire, 3-6 Sep
It’s rare that an EotR line-up announcement doesn’t have us immediately longing for the end of the summer before it’s even begun, and this year it’s business as usual for the South England fest. A beautiful way to mark the end of the summer season, EotR’s 2020 is bulging with musical delights as Pixies, Angel Olsen, Big Thief, Aldous Harding, Bright Eyes, The Comet is Coming and Little Simz are all set to stun. endoftheroadfestival.com

Reykjavík, Iceland, 4-7 Nov
If you’ve dreamed of visiting the stunning landscapes of Iceland, going during Reykjavík’s Iceland Airwaves festival could be just the ticket. Day trips to the Blue Lagoon followed by live music in the evenings from the likes of Metronomy, Courtney Barnett, local girl gang Daughters of Reykjavík, and Glasgow gal Chlobocop, is our idea of heaven. NB: Airwaves was the first Keychange festival to achieve gender parity. Gaun yersel! icelandairwaves.is