This wee music venue is situated just off Lothian Road (aka the best alternative if you're in the mood for drinks and music but are suffering from Cowgate-fatigue). One of the city's few low-cost hire venues, Henry's attracts a diverse and somewhat raggle-taggle bunch of musicians you wouldn’t see in more conventional haunts. Just to be clear, this is definitely a good thing. The stage is a small square wedged into the back corner with two pillars dividing the floor. One pillar stands on the outside corner of the stage, obstructing the view of at least one person in any band with more than three members. Strangely, that's what's good about Henry's. It's also nicely situated beneath Lebowski's, perfect for post-gig White Russians – because that's a thing, right?

Back to Henry's – not only does it offer diverse gigs, clubs and open mic nights, there's also a modest door charge and decent drink prices. It's got that awesome community vibe where you can talk to strangers without feeling creepy or getting your head kicked in. Nice. 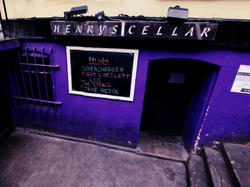 1
Things To Do
Get The Skinny's October 2020 issue
by The Skinny
2
Art
State of the Art: Tramway and The Common Guild
by Adam Benmakhlouf
3
Festivals
10 Great Scottish Short Films from GSFF 2020
by Jamie Dunn
4
Comedy
Tackling Harassment in Scottish Stand-Up Comedy
by Polly Glynn
5
Music
The Skinny's Bandcamp Friday Compilation
by Tallah Brash
6
Music
Flip the Script: Overcoming Scottish music's toxic past
by Tallah Brash
7
Festivals
The Skinny's Best Scottish Short Films of the 2010s
by Jamie Dunn
8
Festivals
Jessica Brough on Fringe of Colour Films
by Anahit Behrooz