Edinburgh's resident temple of creative fabulousness, ECA has, since gaining its status as an independent academic institution in 1906, been acknowledged worldwide as a nurturer of incredibly diverse artistic talent.

Its history is rooted deeper in the soil of time, however - traceable as far back as the 1770s. Handily housed within the University of Edinburgh, ECA gives those enrolled a unique opportunity to benefit from academic expertise and resources from the wider university campus. Thanks to this conglomerate, the college remains a place of collabortation and the mingling of disciplines.Their multi-discipline degree shows usually offer awe-inspiring glimpses of Scotland's cultural future.

What's more their union bar - Wee Red Bar - is a pleasingly studenty alt-pop hangout. Drinks are extraordinarily cheap, it hosts The Egg - an evergreen club night with 20+ years under its healthy belt. Fittingly, the bar is also a flexible venue which can be used to stage live performances or exhibit art. 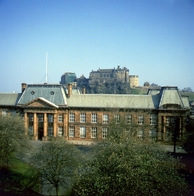