Bossy Love, Callum Easter, Makeness, Pleasure Pool and Heir of the Cursed among others gear up to play The Skinny's stage at 2019's Kelburn Garden Party

After the success of our first foray into stage curation for the Kelburn Garden Party last year, we’re over the moon to be returning to the incredible festival on the grounds of Kelburn Castle this summer, with another Pyramid Stage takeover on Saturday 6 July.

Alongside a line-up which includes Nathan Fake, Leftfield (DJ), LTJ Bukem, Shingai (ex-Noisettes), Rebecca Vasmant, Nightwave, JD Twitch (Optimo) and Kobi Onyame (who played our stage last year), The Skinny’s 2019 takeover celebrates what’s going on in up-and-coming Scottish music. We're hoping for a similarly hot one this year, but if the weather fails you can definitely count on our line-up to bring the heat. In alphabetical order, here's who we've got.

Bossy Love
We’re thrilled to have the Glasgow-based duo, comprised of Amandah Wilkinson and John Baillie Jr, headlining our stage this year. As former members of Operator Please and Dananananaykroyd respectively, Bossy Love are easily one of the best live bands to come out of Scotland in recent years. Effortlessly infusing their brand of pop with a never-ending passion for late 90s/early 00s R’n’B, expect a pop party of the highest calibre. Get ready to sweat it out, basically.

Callum Easter
Originally from Dunbar, but based in Edinburgh, Callum Easter’s debut album Here or Nowhere is a definite early contender for our 2019 end of year Best Of lists, and will surely be in the running for next year’s Scottish Album of the Year Award. When Easter plays live, he offers a completely different experience: mostly toting an accordion these days (which he taught himself, btw, and has only had for a few months), backed by electronic beats. Warm and compelling, it’s hard not to be completely and utterly captivated by him.

Chuchoter
We’ve had our eye on this Edinburgh electronic duo for a while now, speaking to Owen McAllister and Emily Smith last July upon the release of their debut EP, Pieces. Their latest single U Can Find is a meaty pop banger, with a real air of late 90s Les Rhythmes Digitales. When it comes to their live show, we caught them recently at Wide Days and they’ve really stepped up their game, with more bass, more confidence and more attitude than ever before. Don’t get in their way.

Heir of the Cursed
Originally from Kenya, Glasgow-based Beldina Odenyo Onassis, who performs under the moniker Heir of the Cursed, was inspired at a young age by the godmother of rock’n’roll, Sister Rosetta Tharpe, to learn the electric guitar and we couldn’t be happier that she did. With a sound so effortless, comforting and warm, we're absolutely delighted to have her opening our stage at this year’s festival. It’s going to be a rare treat.

Jacuzzi General (live)
The moniker of Edinburgh producer, DJ and Paradise Palms Records boss man Aaron Main, Jacuzzi General (or known less formally as simply The General) recently released his debut EP Dreams of the Tropics. The EP takes listeners on a highly danceable, kaleidoscopic voyage over the course of its four tracks. Released on limited edition cotton hand towels, and launched at Paradise Palms with an actual jacuzzi present, we can’t wait to see what The General brings for his live show at Kelburn this summer. NB, don’t expect a jacuzzi.

Makeness
Sitting comfortably between Caribou and Gold Panda, Kyle Molleson – aka Makeness – put out one of our favourite albums of 2018 with his Secretly Canadian-released Loud Patterns. We first caught him playing a full band, late night slot at Lost Map’s Howlin’ Fling festival on Eigg a few years back and we can’t wait to see what he brings to the stage at Kelburn this summer. Expect big beats, shredding guitars and beautiful hazy vocals.

Maranta
The Edinburgh duo of Gloria Black and Callum Govan first came to our attention last November when they played Bang the Drum at Summerhall, a fundraising night for the Save Leith Walk campaign. Playing first, they were still the band we were talking about come the end of the night: shimmering synths, luscious beats and Black’s unique vocal making for a memorable and standout performance. They just released their debut single, Radiate, a real gem of a tune, and we can’t wait to hear it played live on our stage this summer.

Megan Airlie
We first came across Megan Airlie when Honeyblood’s Stina Tweeddale included her cover of Have Yourself a Merry Little Christmas in a festive playlist she wrote for us at the end of 2017: "This cover is so beautiful, Megan does it so wonderfully." Since then, we’ve seen her a couple of times, performing at the SAY Award last year in Paisley with her full band, and then again at Wide Days in Edinburgh where she performed solo. With a voice that sounds far older than she is, akin to the likes of Liz Green, and a immense wit, Airlie is a truly unique voice in Scotland right now.

Pleasure Pool
We first caught Pleasure Pool in an afternoon slot at last year’s Electric Fields and it was such a party that we’re still thinking about it almost a year on. Since then, every time we’ve seen them it’s been a different experience. With no online presence whatsoever, expect hefty four-to-the-floor disco hi-hats, Talking Heads-esque vocals and bubbling electronics that are more Factory Floor than LCD Soundsystem. Not to be missed.

Pocket Knife
Signed to Olive Grove Records, Glasgow synth-pop duo Pocket Knife are bundles of fun, and their mantra to make "music for bodies to dance limply to", is the kind of honesty we appreciate. When listening to their jingly-jangly, twee beats and rhythms, all topped off by Louise Connor’s talk-sung vocals, swaying constantly and dancing limply is pretty much all we want to do. With songs about cookies (Custard Cream) and wanting to be held like a fish (Fish Song), you can also potentially expect to hear some stellar covers from the likes of Abba and, ahem, Survivor. One can but hope.

So that's that, our stage is prepped and ready and we can't wait for another weekend at Kelburn Garden Party. We'll be hanging out at our stage all day, so come say hi, come dance limply with us and come discover something new and awesome. Here's a wee taster to help get you in the mood. 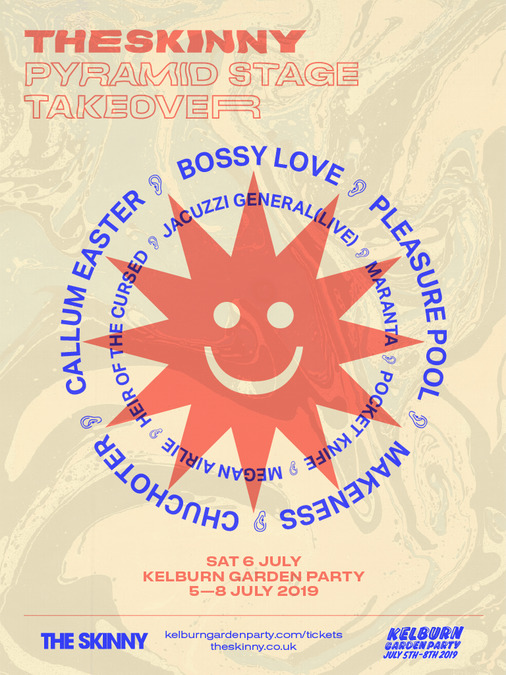