Ahead of their upcoming Christmas party at Glasgow's O2 ABC on 22 Dec, Honeyblood's Stina Tweeddale has put together a cracker of a festive playlist to help get you in the mood

'Time for parties / And celebrations / People dancin' / All night long'. So says Shakin' Stevens, and Honeyblood appear to be 100% on board as they’ve enlisted a whole host of musical pals to join them for some festive fun at Glasgow's O2 ABC on 22 Dec. As well as from Honeyblood themselves expect live sets from The Spook School, The Ninth Wave and Man of Moon. Also they’ve promised stalls with festive fare and zines, plus party DJs and loads of surprises. We (Honey)bloody love surprises! Ho ho ho!

To help get you in the mood for the season one half of Honeyblood – vocalist and guitarist Stina Tweeddale – has put together a delightful Christmas playlist featuring some of her absolute faves. We've popped them into a handy Spotify playlist for you, just below, and there are also some words from Stina about why she's picked these songs. Enjoy!

Low – Just Like Christmas
"This is such a pretty Christmas song. It’s the kind of thing that reminds me of being on tour at Christmas."

Otis Redding – Merry Christmas Baby
"This is a classic. There’s so many good soul Christmas songs but Otis Redding does it the best."

Eels – Christmas is Going to the Dogs
"I love Eels. This song reminds me of being a teenager. It’s kind of an anti-Christmas song, but works in a bittersweet way."

Joni Mitchell – River
"So beautiful. Joni really speaks to the soul, no one really compares."

Darlene Love – Christmas (Baby Please Come Home)
"What an amazing song, one of my total favourites. It sounds so joyous but [there's] such desperation in the words."

Mariah Carey – All I Want for Christmas is You
"This is a classic, she’s the queen of Christmas... let’s be honest..."

John Lennon – (Happy Xmas) War is Over
"I covered this a few years ago at Neu! Reekie! It’s one that really hits home especially this year."

The Drifters – White Christmas
"Another classic."

East 17 – Stay Another Day
"Such a beautiful 90s classic, and it’s stood the test of time."

Destiny's Child – Platinum Bells
"The Destiny’s Child Christmas album is definitely on rotation during the Christmas period for me."

Megan Airlie – Have Yourself a Merry Little Christmas
"This cover is so beautiful, Megan does it so wonderfully."

Have Yourself a Honeybloody Christmas takes place at the O2 ABC, Glasgow, 22 Dec – tickets here 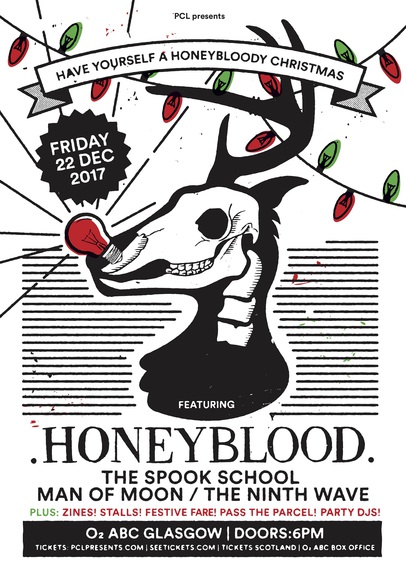