What's On Scotland 16-23 May: Perth Festival of the Arts and more

It's all going off in Perth and Dundee this weekend (yes, we're being serious), as Perth Festival of the Arts and Dundee Design Festival take over the cities. Plus, Joesef, John-Luke Roberts, FLY Open Air and more...

Head out of the two big Scottish cities this weekend (i.e. Edinburgh and Glasgow) and enjoy some of the goings on across the rest of Scotland for a change.

Man of the moment Lewis Capaldi will play a sold out show at Perth Concert Hall on Saturday night, the day after the release of his debut album Divinely Uninspired To A Hellish Extent, as part of Perth Festival of the Arts. The equally rapidly rising Dundonian pop singer Be Charlotte will perform the night before at Joan Knight Studio with support from Edinburgh duo Chuchoter. Running until 25 May, the festival's programme also includes a performance of multi-award-winning play A Regular Little Houdini, English Touring Opera's take on Macbeth and much more.

If you're more of a design fan, head to Dundee Design Festival, taking place from 21-28 May in the Keiller Centre. A range of interactive commissions will be set up throughout the shopping centre, with a programme of one-off events also lined up in venues across the city for the duration of the festival.

Homeshake + DJ Taye
St Luke’s, Glasgow. 21 May, 7pm
In an exciting last minute addition to this show, Montreal-based musician Homeshake (pictured) will be joined by Chicago footwork producer DJ Taye. The youngest member of the revered Teklife crew, DJ Taye released his debut album Still Trippin' last year to critical acclaim, so you would be pretty silly not to get down early to catch him.

Joesef
The Mash House, Edinburgh. 17 May, 7pm
Seemingly coming out of nowhere, Glasgow-based Joesef sold out his debut show at King Tut's before he'd even released any music. Now, with just one single to his name he's also gone and sold out The Mash House. Source a ticket however you can to find out what all the fuss is about. Image: Nathan Dunphy

ADVERTISEMENT | Dundee Design Festival
Keiller Centre, Dundee, 21-28 May, 10am-5pm
Dundee Design Festival 2019 explores what a Liveable / Loveable City is by asking: How can a city use design to shape its future? Based in the Keiller Centre – a challenged city centre retail space – we are rethinking what a design festival is and how it should work. The on-demand format means you can turn up at any time during the week and take part in anything! Image: Kathryn Rattray

John-Luke Roberts: All I Wanna Do Is [FX: GUNSHOTS] With a [FX: GUN RELOADING] and a [FX: CASH REGISTER] and Perform Some Comedy!
Monkey Barrel, Edinburgh. 21 May, 7.30pm
Yes, that legitimately is the title of John-Luke Roberts' latest comedy hour, which he performed at the 2018 Edinburgh Festival Fringe. Roberts is offering a last chance to catch the show at venues across the UK this month before he prepares for this year's Fringe. If the title makes absolutely no sense to you, have a listen to M.I.A.’s 2007 banger Paper Planes for some clarity. Image: Natasha Pszenicki 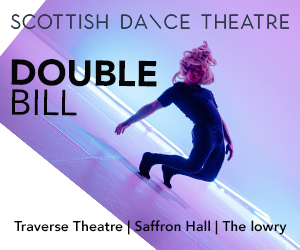 FLY Open Air
Hopetoun House, Edinburgh. 18 & 19 May, 12pm
After expanding to a two-day festival last year, FLY Open Air gets even bigger this time around as Boiler Room make their Scottish festival debut with a stage takeover across both days. The line-up features sets from some of the FLY Club residents, Solomun, Honey Dijon, Nina Kraviz (pictured) and Peggy Gou, as well as a special B2B from newly-announced FLY resident Big Miz and Irish DJ KETTAMA. Image: Andrew Potter Photography