Edinburgh Iranian Festival returns to Filmhouse with an excellent cinematic programme. Over in Glasgow, BAMBARA and Shanti Celeste take over the city's venues, while Scottish Dance Theatre's Ray comes to Dundee.

After a year off for reasons, the Edinburgh Iranian Festival is back with another stellar programme of Iranian cinema at the FIlmhouse. Taking place over the long Easter weekend from 15-18 April, this small but perfectly formed festival features films from some of Scotland's biggest festivals, as well as little known gems that might not normally get a screening.

Freak yourself out with the delightfully unsettling Zalava, a unique folk horror by director Arsalan Amiri that follows a series of demon possessions taking place in a small Kurdish village a year before the Iranian Revolution (we chatted about it on The Skinny's film podcast a few weeks ago!).

Also revolving around the revolution is the achingly intimate Radiograph of a Family, in which director Firouzeh Khosrovani pieces together the country's sociopolitical tipping point through old family photographs and archival material. Make the most of your extra days off and browse the full programme here. 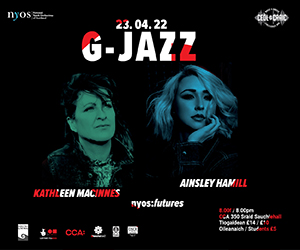 Ray is Scottish Dance Theatre’s latest creation by Brussels-based choreographer Meytal Blanaru. The work explores the phenomena of Emergence, as it ventures on a quest for a deep, collective, shared physical experience, one that tries to bridge between bodies and sweep people far beyond the intellect’s words, ideas and constructions, into a space where people can potentially meet, in a different way.

Wet Leg
The Mash House, Edinburgh. 17 Apr, 7pm
Our April cover stars play a chaotic punk gig to celebrate the release of their highly anticipated debut album. Hailing from the Isle of Wight, duo Rhian Teasdale and Hester Chambers have a firm friendship that comes through in bitingly funny lyrics and an infectious live presence. Image: Hollie Fernando.

Music for strings collides with international exchange in beloved gig venues, intimate club spots and on Glasgow’s pavements with pop-ups and late-night happenings.

£6 tickets for under 30s and those in the G40 postcode. Look out for the badges too!

BAMBARA
Stereo, Glasgow. 16 Apr, 7pm
Dipping into the cowpunk genre (a delirious mix of country and punk) and inspired by the films of Wong Kar Wai and David Lynch, Brooklyn-based rockers BAMBARA are creating some of the most distinctive and genre-bending music currently around. Image: courtesy of artists.