Watch the video for Smell the Fruit, the latest single to be taken from Buffet Lunch's new EP, Snap

“One way I write songs is by picking out phrases or images from other bits of writing and then taking it out of context and building a narrative or scene around that,” Buffet Lunch’s Perry O’Bray tells us when we ask where the idea for the Edinburgh band’s latest single Smell the Fruit came from.

Beginning with pleasingly discordant guitars that sound like a slightly bent out of shape slinky trying to make its way down a spiral staircase, Smell the Fruit is like a dystopian take on The Kinks’ Sunny Afternoon. And with several gear shifts throughout, nonsensical lyrics, out of the ordinary instrumentation and angular guitars aplenty, it’s a more than satisfying sub-two-and-a-half-minutes to be found on their latest EP, Snap.

“For Smell the Fruit I was reading a short story by Madeline Cross and the line ‘Doctor where has he gone?’ stuck out so I noted it down (with permission!),” O’Bray confesses. “I built an idea which may or may not come across in the lyrics, who knows? The image to me was the voice of a child who has lost someone and is trying to find them. Asking possibly the wrong person and following them out of the kitchen window into a night time garden filled with overgrown plants, strange noises and hanging fruit. 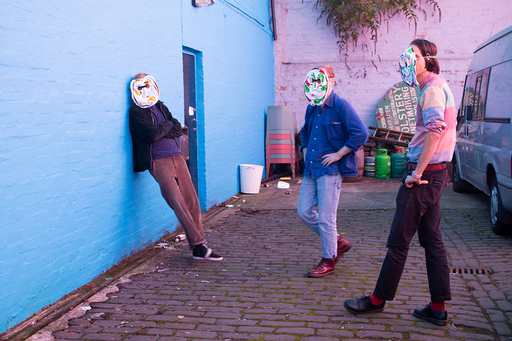 “The person who’s missing is wandering around this scene and has sort of forgotten or decided not to go back and starts engaging with the landscape and decides to stay,” O'Bray continues. “It’s a bit sad really from the child’s perspective, the idea of not understanding a loss and trying to find what it is you’re looking for, but also the other voice seems relaxed with their decision with their hand in their pocket.

“At the same time I try to focus on building a picture and atmosphere rather than telling you a clear message to take away from each song. I brought the kernel of the song, basically one of the guitar parts, along to practice and we all added bits and bobs and built it up that way. I guess it’s influenced by bands like The Fire Engines and Josef K, but there wasn’t any particular intention to sound in a particular way.”

The Skinny are delighted to be premiering the accompanying music video for Smell the Fruit, created by Joshua Roland, which you can watch in the above YouTube player – click here if it’s not displaying correctly.

“We asked Joshua to create the video,” O’Bray says. “He came to see us in Sheffield and I got in touch after seeing his mad Instagram page – he creates distorted and mangled computer animated images that we all really loved and thought might be a good fit!

“We decided to not give a brief as it’s always exciting to see what an artist comes up with as a reaction to your work. The video doesn't follow the narrative of the lyrics but it's a great representation of how we want to be seen as a band when playing live, all wobbly limbed and colourful and we are very chuffed with it!”

Roland is an artist, musician and game developer from Cambridge who currently lives and works in Nottingham. He tells us: “I work mostly in digital, creating weird, grotesque, and sometimes humorous 3D art centered around the distortion of the human body – [for Smell the Fruit] I've used tracked VR motion controllers to exploit the uncanny 'puppetry' effect they create. I've been a big fan of Buffet Lunch ever since I saw them live earlier in the year and I was honoured to be approached about doing a video for them. I'm in love with their new EP and I'm very excited to see what they come out with in the future."