As we get ready to celebrate the birth of our November issue of The Skinny, on this week's show we played loads of great music relating to features in the new magazine, as well as our usual ICYMI/new music sections, Love Local, Don't Speak and Clubbing Highlights. Listen now in the below Mixcloud (click here if it's not displaying correctly).

It's all relative: features from the November issue of the magazine
Free Love – Skin On Skin (our cover stars play The Great Western Festival, Glasgow, 23 Nov; Sneaky Pete's, Edinburgh, 7 Dec)
Human Don't Be Angry – (Why Can't I? ) Dream In Cartoon (playing as Malcolm Middleton at The Great Western Festival, Glasgow, 23 Nov; In discussion about Arab Strap's Philophobia at Summerhall, Edinburgh, 23 Nov)
Cloth – Demo Love (playing CCA, Glasgow, 15 Nov)
Sufjan Stevens – Mystery of Love (taken from the soundtrack to Call Me by Your Name; this month we speak to Timothée Chalamet about his new film The King; in books, we also speak to André Aciman, author of Call Me by Your Name, about his new book Find Me)
Otis Redding – I've Been Loving You Too Long (taken from the soundtrack to Marriage Story; this month we speak to its leading man Adam Driver)
Aldous Harding – Zoo Eyes (this month in travel we take a look at living in Auckland, where Aldous Harding is from; Aldous Harding plays two shows at Summerhall, Edinburgh, 1 Dec)
Karenn – Strawbs (taken from their upcoming album Grapefruit Regret, recorded in Berlin, we played this in homage to Katherina Radeva's solo show Fallen Fruit, set around the time of the fall of Berlin Wall while she was growing up in Communist Bulgaria; we spoke to her for the new issue of the magazine)
Omar Souleyman – Layle (taken from his upcoming album Shlon, we played this in relation to an interview with Basma alSharif about her A Philistine exhibition, reimagining the Middle East)
Giant Swan – Pandaemonium (playing Room 2, Glasgow, 15 Nov)
Jensen Interceptor – E L E K T R O (released via the Glasgow label Craigie Knowes, who we profile in the November issue of The Skinny) 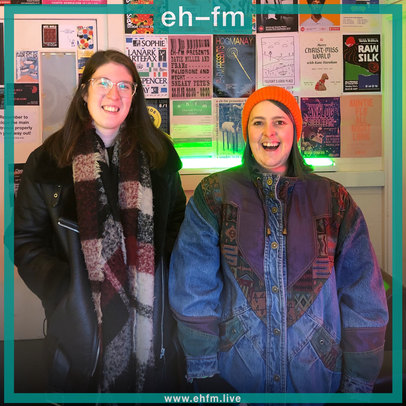 The Skinny's EH-FM radio show airs every Monday between 12-2pm on ehfm.live; tune in next week for a takeover from James Yorkston (4 Nov)!