Beacons In The Dark: The power of radical hope

As another year rolls around and everything is still on fire, one self-described radical pessimist reflects on the power of hope during times of despair

Recently, my PhD supervisor asked me if I was a glass half full or a glass half empty kind of person. I responded, “I’m a the-glass-is-smashed-on-the-floor-and-there’s-blood-everywhere kind of person.” A radical pessimist perhaps. Someone who always thinks about how close to the verge of collapse things are and dwells there. I linger in the “what if” part of my brain far too often and follow it down dark and anxiety-inducing paths.

Sitting down to write about radical optimism for the new year, my first worry is that it could encourage toxic positivity, a trait universally loathed. It gave me flashbacks to the depression I regularly dwelled in during my 20s, and my mother telling me to, “eat a banana and go for a walk”. The painful tension of ignoring the gloomy reality to fake positivity. Toxic positivity only stifles our emotions, gagging them with faux joy. It shames and excludes.

On a global level, we experience this toxic positivity time and time again. We face an imminent, irreversible, ecological collapse that could end life as we know it. The people in charge tell us “that the way to fix the problem is through science and innovation, the breakthroughs and the investment that are made possible by capitalism and by free markets" (a quote from Boris Johnson at the UN General Assembly in 2021). Perhaps the political equivalent to a banana and a walk.

In her book Hope in the Dark, Rebecca Solnit talks about the power of that tiny light in the darkness. It’s hope. This hope isn’t based on an “everything will be alright” or “it’ll all work out in the end” belief. As Solnit herself says: “Hope is an embrace of the unknown.” It is the tiny spark that pushes us to imagine a better future. Hope is the catalyst to see what surrounds us and to consider how it could be different. Hope is most certainly not a banana and a walk. 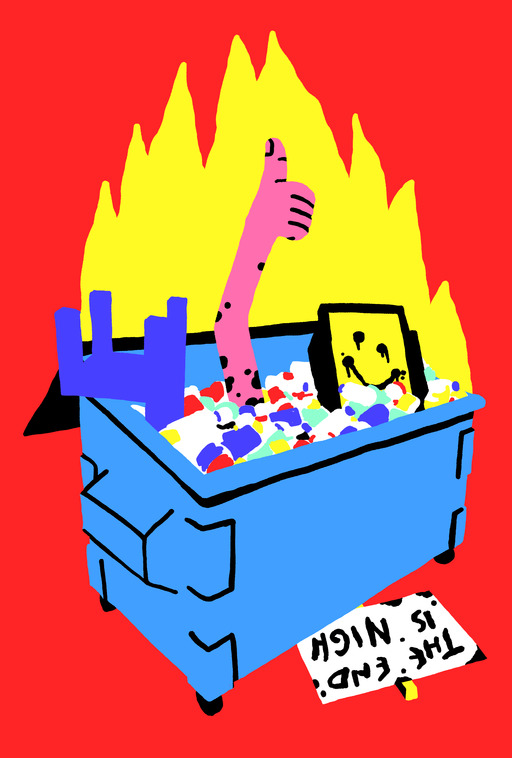 The sparks of hope are bewilderingly bright when you are used to the darkness of pessimism. In fact, so bright they can push you into action. Last year, exhausted by the bleak realities facing artists and audiences attending the Edinburgh Festival Fringe, I wrote about how we could imagine a better future. It takes hope to envision a better future and to ask for one.

Of course, hope doesn’t just exist as bright sparks in brief moments of despair: it took almost a century of protest before women in the UK won the right to vote, for example. Hope was surely not just a spark for the suffragettes; it was a guiding light, a beacon they followed through imprisonment, hunger strikes and force-feedings over decades. They could imagine a better future, and demanded it, from hope.

At a time in history when we are used to immediate gratification, we need to remember that hope is something that can guide us even when change is a long and challenging task. This is what makes hope such a radical act – that it survives even when under centuries of attack. In amongst the deepest depths of despair, we can collectively imagine and ask for a better future. Black Lives Matter, #MeToo, the marches after Sarah Everard’s death, the protests surrounding COP26: these are moments of pure hope. Of radical optimism. These sparks of hope belong to timelines expanding back over hundreds of years of people demanding a better future.

Radical optimism isn’t the idea of only ever seeing the good in a situation. In some cases, there is nothing good to see and hope does not guarantee a better tomorrow. But what hope can offer us is a spark of action. It brings us together to protest, to march, to sing and to shout for a better future. Hope is also a beacon, a far distant lighthouse when we’re navigating treacherous journeys, some of which are centuries long. Hope is a radical act of optimism when the world seems at its darkest.