Scottish street food has gone from strength to strength in the past decade, and one matte black van serving fried chicken is leading the way

It’s a pretty drab Saturday afternoon on a back street off Ferry Road. Underfoot, the cobbles are a mass of matted weeds and mulched-up litter; shutters are down, white walls have been whiter. In one of Pitt Street’s car parks are a slightly disconcerting number of bright yellow buses, definitely more than you’d expect to see at once. In the next lot over is a scuffed, matte black van with a flat tire and a folding drivers’ side door that, for some reason, has a post box built into it. This goth cousin of the Scooby-Doo mobile is The Buffalo Truck, and it’s responsible for the best sandwich in the country.

The 2010s were the decade when street food really became ‘a thing’ in Scotland. It’s a success story with a number of different strands, the first being cost. Running a small business is hard, and keeping that business ticking over in a time of long-term wage stagnation and general economic malaise is harder. Then there’s our mutually dependent loves for ‘events’ and the post-industrial aesthetic – why eat somewhere that merely looks like an abandoned factory when you could freeze your nuts off in the real thing? Make a day of it!

Conversely, street food’s popularity speaks to our love of seeing simple things done well, and markets and halls like the pitt and Big Feed bring together enough different traders so there are options for even the pickiest or most specific of eaters. Of course, when you get a bunch of options together, there are going to be favourites. At the start of the day, even as the bar is still being unpacked and it looks for all the world like it’s going to piss it down with rain, there’s a queue forming in front of an ominous black van with the words ‘FRIED CHICKN’ on the side. 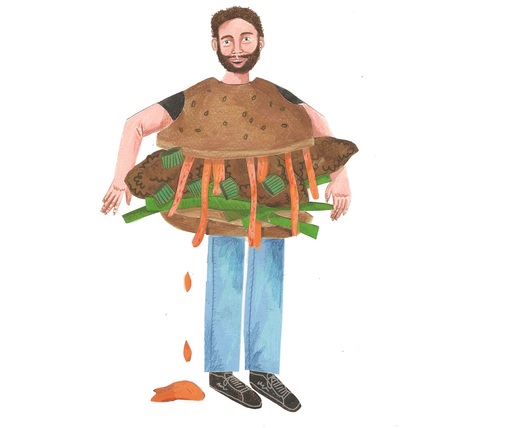 The Buffalo Truck’s namesake Buffalo burger is fairly straightforward – half a bread roll, lettuce, a craggy, crunchy hunk of deep-fried chicken thigh, a pair of sauces and the other half of the roll. The Buffalo sauce is a salty, tangy lip-puckerer purpose-built for waking up the tastebuds of someone who’s been spending their Saturday afternoon drinking outside. The homemade blue cheese mayo balances out the savoury buffalo and the spicy chicken, and throws in a funky note or two.

The breading on the chicken, packed with herbs and whole fennel and cumin seeds, is simply incredible. It’s a crunchy, spicy exoskeleton that you could coat almost anything in and you’d be on to a winner. If, by some tremendous Laurel and Hardy-esque accident, The Buffalo Truck somehow breaded your hand, you’d probably still try to eat it. You’d just make a remark about it being ‘finger lickin' good’ between screams.

The end result is a salty, juicy, spicy and saucy delight that makes an absolute mockery of its £6 price tag. Seriously, six pounds. This is what street food is all about; one dish, and a fairly simple one at that, perfected over the course of months and years. Strip back a restaurant setting, take away table service, even get rid of the heating and roof, and what are you left with? An incredible piece of food, and a gaggle of people standing around in the cold to try it out. If you don’t like the rain, wear a jacket. If you don’t like big events, sneak in early before the queues. And if you don’t like fried chicken... well you’re out of luck. But for those of you who do, you won’t find any better.

The Buffalo Truck is at the pitt every Sat and Sun, 125 Pitt St, Leith
instagram.com/thebuffalotruck