If you delve into these pages every month, it probably won't surprise to learn that we enjoy a beer or two. But with Scottish booze sales at their lowest for 25 years and an increasing focus on the impact that prolonged boozing can do to our physical and mental well-being, we decided it was a good time to check out the crop of non-alcoholic beers on offer to find out which ones are worth bothering with.

First up, let’s define some terms. ‘Alcohol-free’ beer means beer with negligible traces of alcohol (up to 0.05% by volume), whereas ‘no-alcohol’ beers have zero alcohol in them whatsoever. In UK law, drinks only start becoming ‘alcoholic’ at 0.5% abv, so a number of ‘non-alcoholic’ drinks have that amount of alcohol in them. You'll need to check the label if you're particularly keen on keeping away from alcohol, but you can start winnowing down your options by heading to the beer aisle and looking for the blue cans because it turns out there are three steps to designing non-alcoholic beer packaging. Step one: copy your regular packaging. Step two: colour part of the design in blue. Step three: take the afternoon off.

With that in mind, we’re on the hunt for drinks that look the part, remind us of the nice elements of a regular beer, and are tasty enough to warrant their existence when cans of Irn-Bru are readily available in every pub in the land. For this challenge, we’ve broken the contenders down into four distinct categories, starting with the lighter end of the spectrum, and the bit that seems like it should be the easiest to ape without alcohol.

If a beer doesn’t have a whole lot going on to begin with, there’s only so much damage you can do by making tweaks, right? Well, sort of. Pour out a Heineken 0.0 and it has the same straw colour as a standard mass-market beer, but then take a sip and the flavour just evaporates on your tongue. This. Tastes. Of. Nothing. It isn’t just the taste; there’s no volume to it, it’s just a wall of carbonation with nothing else behind it. Things are a bit better with Beck’s Blue; the colour’s a bit more vibrant, and the flavour lingers just a little bit longer. There’s a bit of a tang, and a pleasing fullness to each swig. It’s still a bit fizzy, sure, but at least it doesn’t feel like bubbles might start flowing out of your ears.

We had high hopes for the Clausthaler, a bespoke low-alcohol beer that features a Very Serious and Professional label without a hint of blue on it. We’ve gone for the unfiltered version, so it pours a bit murky, looking more like a solid block than a sloshable liquid. Take a sip and it becomes clear that this beer is a different beast from the previous two. It’s super-floral, with a flavour that lingers, very specifically, in the jowls. It isn’t too sharp or fizzy, but then it tastes like shower gel so the sharpness is a bit of a moot point.

We return to safer ground with the low-alcohol version of Pistonhead Flat Tire Lager. It looks good – nice shade of yellow-brown – and it actually tastes pretty decent. There’s a nice citric flavour and it doesn’t overstay its welcome, and it has the balance right when it comes to fizz. Enough to help things plod along, not so much that you immediately catch a monstrous case of the burps. A solid contender.

As we move into the ales, things get a little weirder and more experimental. We kick off with two beers from Dutch brewery Braxzz, another group of brewers who focus on low- and no-alcohol beers. We managed to get our hands on a pair of 0.2% brews – their Rebel IPA and Orange IPA. They both pour about the same; slightly dark, kinda orangey, and a bit on the flat side. Take a sip though, and things get well wacky.

The Rebel is what you might call a ‘flavour bomb’, in that it slips past your tastebuds undetected then detonates in a hail of hoppy shrapnel. It’s really quite a lot to deal with, and not actually all that pleasant. The Orange is a bit better; it still has that same aggressive bitterness, but paired with a fruitiness not dissimilar to an iced tea or school playground classic the Kwenchy Cup. It’s nicer than the Rebel, but it is also extremely confusing on the palate. An evening of these would be too much for our senses to keep up with.

Much simpler is the Without ale from St. Peter’s brewery, a completely alcohol-free dark ale. It pours to the colour of an old pub table and packs a sugary, fudgey mouthfeel. It does feel a bit like a throwback to the mid-1970s, and the bottle makes it looks like the kind of medicine you’d buy off the back of a covered wagon, but if old brown beers are your jam then knock yourself out.

For a low-alcohol ale that actually tastes pretty damn good, we recommend heading for the 0.5% version of Adnams' Ghost Ship. It’s a citrus-heavy pale ale but with almost all of the alcohol taken out. In a shocking turn of events, that’s exactly what it tastes like. There’s a nice hint of bitterness, but it’s extremely light and a little bit on the watery side; it’s more of a polite hug than a big dramatic proclamation, but that’s fine by us. 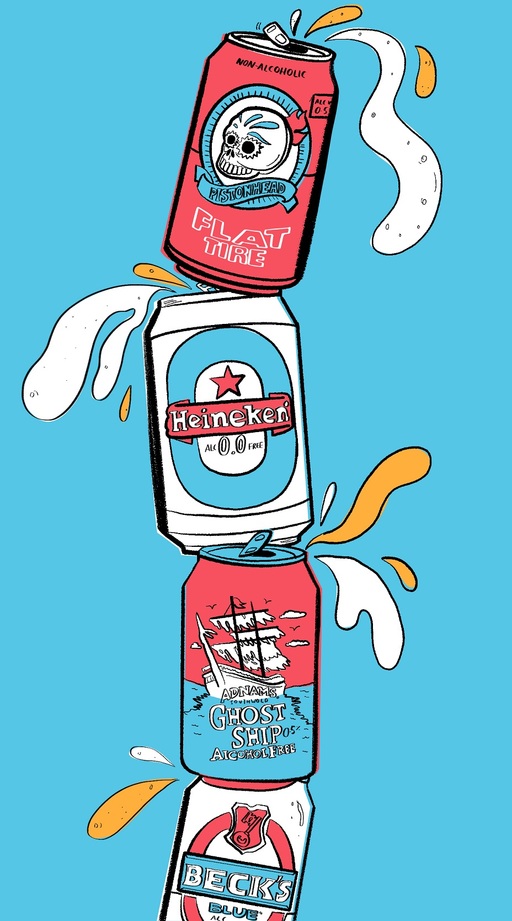 With the ales and lagers out of the way, it’s on to the Weissbeers. A classic German beer style, weisses are packed with spicy and banana-adjacent flavours so we have high hopes as we kick off with Erdinger’s alcohol-free offering. Those hopes may have something to do with the fact that one of our tasters absolutely swears by the stuff and is rattling through a short speech on its merits as we crack the bottle open. It’s light but with a little bit of a kick, and a pleasing background fizz that really helps things along.

The non-alcoholic beer from Schneider Weisse is slightly darker and more mysterious, and more flavoursome as a result. There’s a good amount of oomph to help those clovey notes along, and a satisfying wheat beer finish as well. The flavour lingers a little longer on the palate, which means that it will dry your mouth out like nobody’s business, but that’s a small price to pay. Also, how do you solve a dry mouth? Put liquid into it. What’s that in your hand? Oh, it’s a delicious liquid. Truly, a problem that solves itself. Also tasty is the alcohol-free edition of Franziskaner. It looks like swamp water, but it tastes just like the regular thing – nice and herby, good level of fizz, and a very jolly monk on the blue bottle.

The final two drinks on the list are wild cards. First up is the 0.5% Raspberry Blitz sour from Brewdog. On pouring, it looks a bit like the kind of drink you’d give a small child in the 90s only for them to spend the next few hours running around the garden in circles. Taste-wise, it has the requisite sour funk, but it’s super-duper fizzy. That adds to the sharpness, but there’s a weirdly close mouthfeel to this one, a bit like you’ve just run your tongue along a patch of nettles. Eminently drinkable, providing you like sours in the first place.

And if you don’t like sours, boy oh boy is Kopparberg Alcohol Free mixed fruit cider for you. If removing the alcohol from beer leads to an increased awareness of the flavours left behind, taking the booze out of cider just leaves you thinking ‘fuck me, that's sweet’. It’s like there’s a party in your mouth, but the all of the guests are made of sugar. This cider is light and refreshing, but it’s also very close to drinking undiluted squash. After two sips, it feels as though we may never sleep again. If you need a non-alcoholic or low-alcohol drink next time you’re out and about, hit the nearest weissbeer or track down the Ghost Ship or Flat Tire. And if you feel like that can of Irn-Bru on offer isn’t quite sweet enough, we’ve got just the thing...