Bread and Butter: The subtle art of grocery lists

In the winning article from our Food and Drink Writing Competition, we delve into the personal histories, sociopolitical insights and absurdist comedy that comes with the humble shopping list

If a year ago we were told our one and only social activity was going to be grocery shopping, many among us, if not everyone, would have found it appalling. Not me though; I revel in grocery shopping.

No activity has the ability to galvanise and simultaneously appease me as much as grocery shopping does. I know it is a fairly unpopular opinion; there is chaos, there is an overabundance of colours, surprisingly unflattering lighting and sudden temperature variations. Not to mention people; a lot of them, usually. Nevertheless, I have always mapped the cities I have lived in according to their supermarkets’ distribution, creating a mental atlas of alternative landmarks, able to know at all times the distance separating me and a litre of milk.

In the past year, grocery shopping has acquired a deeper meaning as, sometimes, our only connection to the outside world – a promise of a territory so dearly missed and highly suffered through ever-changing regulations and guidelines. As the lockdowns rolled on I thought of putting my superpower to good use and started volunteering to go shopping on behalf of people most vulnerable to the current health crisis. I won’t lie, the COVID-related regulations made a dent into my idyllic conception of this activity as well, but I remained solid on my principles.

Entrusted with strangers’ grocery lists, I pranced among the stocked aisles, picking and choosing on their behalf. I followed close instructions or broad generalisations, deciphered hidden messages, and calculated quantities – never have I wished more for a universal measuring system. Much like a real life treasure hunt, map in hand I ventured into unknown lands of recommended local fishmongers, halal butchers and the elusive fine food and gastronomy boutiques. It dawned on me that, while alone, I was accompanying a plethora of identities through what is usually a very personal choreography around town. All these notes, envelopes and Post-its told me stories through their shapes, colours, hurriedness or prolixity.

Five toiletries scrawled on an old train ticket rushed me with the urgency of slightly obsessive cleaning (we’ve all been there this year) and pricked me with the nostalgia of my last train journey. A cow-shaped Post-it completely overshadowed its contents – her big pink ears and kind eyes saw me through the pouring rain, and she nestled in my pocket like a wee secret pet, a wise friend whose advice I would gladly follow. I thus started treating the lists as accidental self-portraits of faceless strangers I would otherwise only know through short intercom communications from behind closed doors. 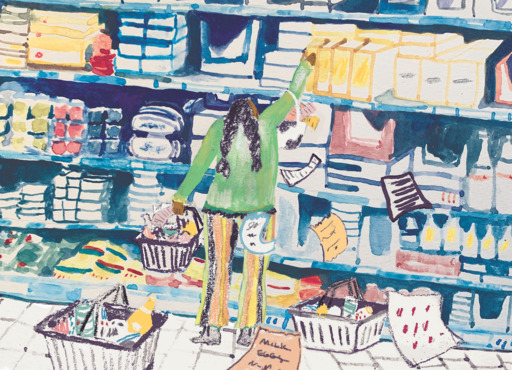 It is a peculiar thing to write a grocery list, if you take a minute to think about it. It reveals as much about us as the environment we find ourselves in and it involves a series of interconnected knowledges. It is an action most people perform regularly, probably while putting much thought into its contents but less so on the action itself. This year it took on a ritualistic character, an exercise in style or a correspondence with the outside version of ourselves; an admonition to truly make the most of that limited time, to maintain focus and pick up everything, as much as cherishing in the unpredictability of the spontaneous purchase – Angel Delight exists for a reason.

In the case of my volunteering service, the lists became prostheses of their authors, extending towards the forbidden outside. My very presence stood for the absence of other persons, of specific demographic categories that couldn't even take on the risk of the weekly groceries, of the last remnant of sociability. It truly speaks of the sheer privilege of youth, abled-bodies and good health in the current situation, among many others.

As a means of expression in a peculiar situation, the grocery lists piqued my curiosity around the identity of the authors by stimulating my imagination. It was less an enquiry over authentication and more a quest for identification through relation. I related to these lists, I empathised with whomever wrote them. A small particular would have the ability to move me, and I would then create narratives, delineating in my mind specific personalities, which might or might not have been correct.

A short list, hijacked midway by an author with a different pen and writing impetus urged me to buy fish brains and eyes, as well as chocolate Legos, on top of the other (we agree) boring items mentioned earlier on the list. This big wiggly handwriting, vacillating on the Es with an invincible reversed И, screamed at me with the repressed silliness of months of indoor living and the stinging frustration of the comedian dealing with a tough crowd. I saluted this boy’s resoluteness in broadcasting his comedic talent, and of course his mum’s indifference in leaving such additions, probably symptomatic of an extended exposure to poop jokes.

This co-authored grocery list allowed for a glimpse into the struggle of homeschooling and parenting throughout the last year, and it wrestled in my hand with the pressure of an escape valve, for both parties involved. UNESCO’s report on the adverse consequences of school closure due to the COVID pandemic presents itself as a dense page of 13 entries. The interconnected critical effects of remote or halted learning range from confusion and stress, economic strain on families, dropouts and teenage pregnancies to violence or exploitation. The breadth and the intricacy of the impact on kids' lives feels as ludicrous and aberrant as fish brains paired with chocolate Lego, although far, far less witty.

When grappling with a lengthy list riddled with spelling mistakes I noticed its accuracy in describing brands and specificities of products as well as their organisation according to the succession of the shop’s aisles. This was a knowledgeable author in the art of grocery shopping, yet one uncomfortable in its written expression. Mulling over the unusual phrasings I considered the possibility of a foreign identity living in the household of the elder person, who usually answered me through the door phone. And there it was, put literally down in black and white, obvious as 'black beens' with 'Persil sop for clouths.' The crisis of care, exacerbated by the health crisis, was truly made apparent. By this, I am referring to the crisis of the system’s ability to reproduce itself brought on by governments’ desertion of social reproductive functions throughout this pandemic and long before then. Let me explain.

Grocery shopping occupies the paradoxical position of being considered both essential and menial. As an activity it is part of that squad of familial and communitarian work, still strongly presented as a class-specific and gendered occupation, which stubbornly insists on sustaining the worker instead of producing a product (pardon my Marx). This list’s tentative orthography but informed delivery made clear the dislocation and migration of countless people (mainly women) from the global south to take up caring positions for the elder population of the global north. It vocalised the strain of displacement and secludedness; of distance from personal families and closeness to employers’ family; of mutual aid and codependency; of a domain strongly affected by COVID; for the physical, social and economic vulnerability of both parties involved.

These lists I carried around became entry points into various broader and more complex discourses. Instead of letting myself slip into the black holes of alarmist news reports and the endless 'infected-recovered-dead' figures, I started paying more attention to the lived experiences I was encountering through scribbled paper. I speculated over these people’s lives, fully engaging in a game of free association, where one kilogram of oranges and a precooked meal, in their unbalanced company, spoke to me through an old friend’s voice and their stubborn conviction that citrus could cure just about anything. It comforted me to create these stories; to try through personal histories, albeit fictional in part, to make sense of this past year and all its multifaceted hardships and hopes.

When back at home in Italy, next to the ubiquitous and overbearing 'pasta' in all lists I engaged with, the common admonition to NOT get penne lisce (smooth penne) amused me every time. It warmed my silly little expat heart to know that nothing in this world, literally not even a global pandemic, would change my fellow citizens’ mind towards this much-snubbed type of pasta. You might have thought the whole 'singing on the balconies' last March was the wholesome representation of a country coming together in face of hardship, but truly the strongest form of Italian fraternity has been – and will always be – culinary pretentiousness.

It is in these less flamboyant, small cues that we truly portray our collectiveness and interconnectedness. Letting random words like bread and chicken conjure some intricate scenarios, or open up discussions of current societal shortcomings, it didn't occur to me that by doing this – both the daydreaming and volunteering – I was also leaving some trace of myself. That is, until my own name appeared on one of them, unceremoniously mentioned after “eggs” and “lard”. A way of remembering my imminent arrival as much as the lack of animal produce in the house? Or a way of informing me I was as much part of this grocery game as I was the maker of it?