This is a story with a fairly inauspicious beginning. At the start of October, to coincide with London Cocktail Week, the Glenlivet whisky distillery unveiled a new collaboration to kick off the week’s festivities. The distillery had been working with award-winning bartender Alex Kratena and fancy-pants cocktail bars Tayēr + Elementary on a new trio of whisky cocktails, with a unique twist.

These new cocktails came not in a glass, a tumbler, or even one of those lovely earthenware mugs with no handle. No, these drinks – in Citrus, Spice and 'Wood' flavours – came in the form of edible capsules that look a tiny little bit like pillows. They were served up as welcome drinks over the course of the week, and were, by most accounts, quite nice. So far, so good. This is where the story twists into a knotted ball of online outrage, big brands, and Enormous Twitter Energy. Oh, and one of America’s leading detergent companies.

In early 2018, people in certain corners of the internet started talking about something new and odd – the Tide Pod Challenge. To the uninitiated, washing machine pods are those self-contained blobs of washing liquid in a dissolving capsule, with Tide’s variety being particularly colourful and reminiscent of the most corporate children's treat imaginable. As early as 2015, people were pointing out that this clothes-cleaning stuff really looks like the kind of food you'd aim at children, and so naturally the challenge set by the edgy teens of the 2018 internet was to eat one. A Tide Pod, we mean, not a child.

Now, when people hear the word ‘challenge’, the word ‘internet’ and any word that doesn’t sound immediately edible, their ears prick up a little, and soon the Tide Pod Challenge joined its cinnamon and car-surfing cousins in the pantheon of online scare stories. The fact that fewer than 100 people were reported to have actually eaten the detergent during challenge season – contrast that with the more than 10,000 under-fives who ate, inhaled or otherwise ingested the stuff by accident in the previous year – became largely irrelevant. ‘Are teens really eating soap? Not in any significant numbers! Sorry, I only heard ‘teens… eating soap… in significant numbers!’ Better tell everyone about it right away.’

So what does this have to do with whisky, which is entirely edible and occasionally delicious? Well, look again at those Glenlivet capsules. Squint a little, and they do look a teeny, tiny little bit like something you’d stick in the washing machine. That’s handy, because it allows everyone to jump straight in with headlines like ‘At Long Last, Alcoholic Tide Pods Are Finally Here’ and to razz Glenlivet on Twitter until the cows come home shitfaced on whisky capsules.

It seems the internet hadn't got over their last bout of detergent mania, so the sight of a liquid-filled square was enough to kick things off again. In those conditions, all a story like this needs to really get rolling is a catchy, search-friendly term like ‘whisky tide pods’ and boom – several days of online snark, served up buffet-style. That’s why there’s now a paragraph on the Wikipedia page for Consumption of Tide Pods (a real thing that we have not made up) which reads as follows: “Glenlivet has announced they are releasing a new kind of 'cocktail' that appears to have been directly inspired by the Tide Pod Challenge”. That “directly inspired” line, by the way, comes from Michael Walsh of the Nerdist who, thinking out loud, says that’s what these cocktail capsules look like to him as a third-hand observer. That's one way of using the word "direct", we suppose.

Down with This Sort of Thing

So that’s the general public’s response – mockery and nostalgia for a big moment in meme history. The response from whisky fans – keen to prove that they know what’s good when it comes to drinking old, brown liquid – was a different story altogether. This is a disgrace to the heritage of Scotch whisky; this makes whisky drinkers look stupid; how are you supposed to sniff something that’s inside a bag made of seaweed?

There were the somewhat-elitist arguments about the importance of “appreciation”, and how that trumps having fun with weird whisky blobs, and a good number of people re-fighting old battles about whether or not it’s OK to put anything other than a drop of water in your dram. Lads, cocktails exist, get over it. In fact, these whisky blobules are only here in the first place to hype Glenlivet at a cocktail festival, where the whisky will be served... wait for it... in a cocktail. 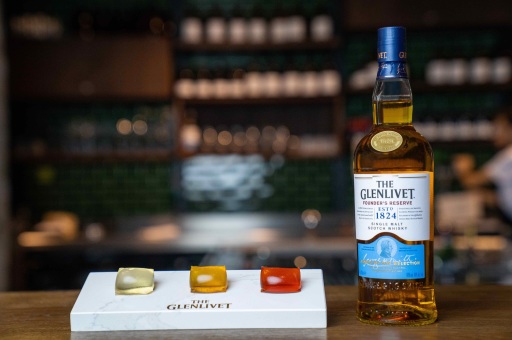 Of course, that’s the whole point of all of this – to hype the brand by annoying and outraging people who may or may not ever get anywhere near the actual product. The real purpose of the mouse’s pillowcase filled with whisky and bergamot is to make you talk about the whisky brand, to raise awareness of this particular whisky brand, and to sell more whisky. The logic behind creating colourful bundles of washing liquid that look like sweets is to sell more washing liquid, and if the best way to do that is to make them look really appetising then, well, better tell people not to eat them and hope for the best.

The thing about marketing is that it has an impact whether you appreciate the message or not, and as companies try to grab our attention they're often reaching for the advertising equivalent of a taser. If a soft drink company suggests police brutality can be stopped by Kendall Jenner and a bag of cans, it's taking a punt that you might be so shocked you remember them next time you're standing next to the fridge. When a razor brand calls out toxic masculinity, they're working on the basis that everyone will flap their jowls about said brand, whether they support the message or really, really don't.

If you’re shouting about an enormous multinational drinks brand, by name, for the Twitter glory, you’re sort of doing their job for them, even if it is in the context of them being a bit daft. Your outrage, righteous or otherwise, helps them grow stronger (and before you start, yes, we realise the irony of pointing all of this out in an extremely public forum).

That’s why when Glenlivet make a PR statement to back up their PR stunt, they don’t simply release a sheet of A4 with the Thinking Face emoji and a footnote reminding their adult customers not to eat detergent. They say: “We want to reassure you The Glenlivet is committed to producing safe, responsible & delicious products for adults.” If it was all about damage control and disassociating from youths who eat soap, you probably wouldn’t pop the word “delicious” in there, would you?

When something pops up online, question where it’s come from. If a story seems too simplistic, it probably hasn’t been explained very well. If a brand is trying to get you fired up, don’t fall for it. And above all else, please, please, for the love of pod, do not eat washing detergent.