Activists working in hospitality, craft brewing and union organising give their thoughts on beer’s sexual harassment problem, and how to tackle it

The craft beer industry has recently been the focus of a #MeToo resurgence with many stories of sexual assault, sexism and gender-based violence being shared on social media. Women and LGBTQ+ people working in hospitality have been spat and shouted at; flashed or physically and sexually assaulted on shift; and threatened with rape if they walk home alone.

A recent survey conducted by Women On Tap, who campaign for beer equality, showed that 73% of women have experienced sexual harassment while working in a pub/bar while 75% of people said that the harasser was almost always male. Yet the culprits are not only customers but colleagues and managers, and claims have been levelled against many craft brewery workers in Scotland.

Charlotte Cook is now Head Brewer at Coalition Brewery in south London, but she started her career as an assistant brewer at BrewDog aged 22, and the only female member of her team. Cook is now a signatory on the recently published open letter to BrewDog which alleged a working environment rife with inequality, bullying and unsafe working conditions, and has been signed by 300 ex-employees of the Scottish craft beer behemoth.

Back in 2013, the comment “Have her drink it naked” was left alongside a picture of Charlotte on BrewDog’s Facebook page, so she asked for it to be removed. Brewdog’s HR and social media teams both refused. Eight years later, and only following a recent BBC Woman’s Hour interview where Cook retold the story on-air, the comment has finally been taken down.

In the grand scheme of things, Cook does not consider this matter a huge issue but identifies it as evidence that the culture of misogyny she knew well is still embedded within BrewDog. “People need to take it with the gravity that it actually deserves rather than just saying ‘this is how it is’. We also need more education on how to deal with [sexual harassment], how to de-escalate a situation and how to support someone who has been a victim of it.”

The open letter to BrewDog was inspired by the work of Siobhan Buchanan, a brewery worker and beer writer who has been publishing anonymised stories of sexism and sexual assault in the hospitality industry to her Instagram stories.

According to Buchanan, many sites claim that they are too small to have adequate HR departments or policies to deal with these sorts of claims, which explains why they are not reported and dealt with, but Buchanan suggests that attitude is as much of an issue as resources.

“I think a lot of breweries and small businesses, craft beer bars etc, don't have to do it so they don’t,” Buchanan says. “They think, ‘we don’t have to bring in someone to do diversity and equality training because we know we’re all progressive feminists.’ But in actual fact, just because you think you are progressive and a good person doesn’t mean you’re not going to miss instances [of sexual harassment] when they happen.”

Buchanan’s own experience was refuted by a female colleague when she reported it and this is something that she has found to not be uncommon. She says: “I think that we not only have to raise awareness of the actions of predatory men and how uncomfortable they can make us feel. We have to raise the issue that there is so much internalised misogyny in women that they just let this behaviour slide and then men think it’s okay to behave like this because they are not getting shut down.” 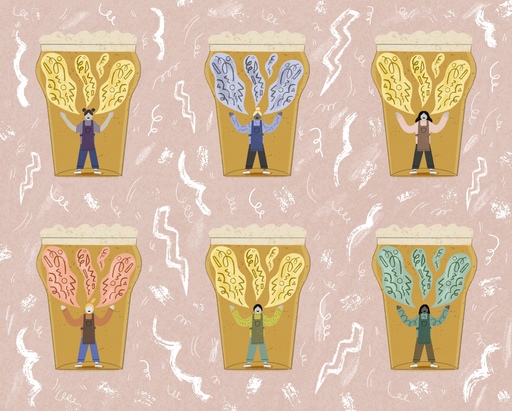 More evidence of the difficulties faced by women in beer comes from the hospitality branch of trade union Unite. Their recent survey of hospitality staff found that 88% of those surveyed feel that their employer does not have sufficient training/protection to prevent or mitigate gender-based violence or harassment.

Caitlin Lee, Chair of Unite Hospitality in Glasgow, says: “I think the culture of misogyny and sexism and lack of respect for the industry are things that create a really toxic, unsafe environment for workers. Customers often ask ‘what else do you do, or are you just a waitress?’ If you don’t respect someone’s job then you’re not going to respect someone’s safety.”

Lee is a strong advocate for Real Living Wage, paid transport home and proactive sexual harassment policies, and these all likely form part of the solution to the sexual harassment epidemic, but Lee also suggests that regulation could help change the environment.

“In hospitality, there is no actual body to hold hospitality venues accountable for a lot of situations,” Lee explains. “Scottish alcohol licensing is so rigorous [but] if you look at the licensing it’s all about customers. I think [sexual harassment] should fall within the licensing of the place. If your workers are not safe and they are not treated correctly, then you are not fit to run as a business, therefore your license is revoked.”

If you are a hospitality worker facing harassment at work, contact a trade union – Unite, UVW and IWW are all vocal supporters of hospitality staff – and speak out if you can. As Charlotte Cook puts it: “There needs to be awareness from the wider community that this still happens and it happens all the time.” The key is to keep talking, and keep trying.