It's the golden age of sitting in the house, streaming multiple TV shows at once or watching a brand-new film in the bath. But for every mega-hit like Game of Thrones or Marriage Story there are dozens of freshly-made series and films just waiting to be discovered, and hundreds of hours of classics sitting there with no-one watching them. That's what this new series is all about – unearthing some of the most interesting, intriguing and inexplicable wonders on Netflix, BBC iPlayer, MUBI, All 4, and the various other streaming platforms you're subscribed to.

Girlfriend's Day (2017) is set in a cynical, pallid California which appears to revolve entirely around the production and consumption of greeting cards and Ray (Better Call Saul's Bob Odenkirk) is our glum, world-weary protagonist. He’s a classic sadsack – a divorced, unemployed alcoholic with an injured hand and broken heart. He watches homeless people fight on TV, he pays his rent by babysitting his landlord’s kid. He used to write greeting card bon mots, but he's suffering from writer's block.

Ray gets a commission from his former boss to work on a top-secret greeting card-based project, and meets kindred spirit and love interest Jill (Amber Tamblyn). Oh, and he gets tangled up a web of scandal, corruption and murder. Throw in a ridiculous double twist ending and multiple card-writing montages, and you’ve got yourself… up to the 70 minute mark, which is good enough for us.

Who stars in Girlfriend's Day?

If you want famous faces – and by famous faces, we mean stars of off-kilter US TV – you’re in luck. Besides Odenkirk, there are roles of varying sizes for Alexander Karpovsky (Ray from Girls), Andy Richter (Arrested Development) and Mad Men’s Rich Sommer. There’s a one-scene cameo from Russian Doll’s Natasha Lyonne that’s so brief, it’s astonishing that the Netflix algorithm has the cheek to say she “stars” in the film.

David Lynch makes a forty-five second voiceover appearance, narrating an informational video about greeting cards, which, to be fair, is massively on-brand for big Dave. 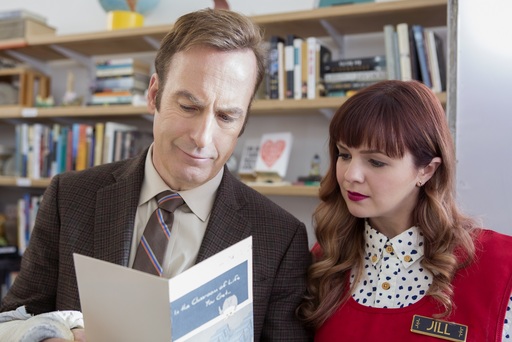 It’s a bit like watching a Coen brothers film on fast-forward. There’s a sandpaper-dry comic tone, aloof and detached characters, and occasional bursts of violence – plus a pair of “reformed” former racist gang members who are dead ringers for the nihilists in The Big Lebowski. The dialogue is a mix of non-sequiturs and pithy one-liners (“He’s dead? Oh yes, he was killed to death”) and there’s an overarching cynicism to most of the characters for most of the runtime.

Why watch this now?

If you rushed through Better Call Saul and need another burst of sad Bob to get some perspective on your life; if you watched David Lynch’s short film with the monkey and want more, but don’t want to pay Sky for the pleasure of rewatching Twin Peaks.

Is Girlfriend's Day worth watching?

Other than Ray, the characters are all pretty flat. The plot jumps about all over the place for a film so short, and the grey-washed aesthetic is a bit too on-the-nose at times. That said, it’s an hour-and-a-quarter of detached, pithy weirdness with some genuine laughs – provided your sense of humour is as dry as the desert sun, there’s something in it for you. If nothing else, watch it up until the moment ten minutes in, which explains how Ray hurt his hand; you’ll never look at an bird sanctuary the same way again.

What to watch on Netflix next?

Better Call Saul: a new series of Odenkirk’s Breaking Bad spin-off is out and waiting.

W/ Bob and David: Odenkirk and David Cross’s surreal and bizarre follow-up to their equally odd Mr Show. A truly weird sketch show that’s, frankly, much more hit-and-miss than this, but it does feature some absolute gems.

What Did Jack Do?: The aforementioned David Lynch versus a monkey art film. Imagine the diner scene in Heat, but with better hair and more monkeys, and you’re halfway there.