Are these really the best British sitcoms?

The Radio Times' recent poll on the Best British Sitcoms of all time is full of tired, toothless shows that lack innovation and edge. The Skinny team suggest some alternatives

OK, we know. Any list that claims to reveal the "Best of" anything is to be taken with a pinch of salt, but even more skepticism should be applied to a list trying to canonise something as subjective as comedy. The Radio Times has done just that this week with its 20 Best British Sitcoms of All Time list, and it's as uninspired as you might imagine (see the list below).

Top spot goes to Fawlty Towers, which is about as surprising as getting hit on the head with a spoon by an angry hotelier because English isn't your first language. Don't get us wrong, we can see the brilliance of John Cleese and Connie Booth's expertly calibrated farce centred around the chaotic happenings inside the eponymous Torquay hotel. And as a satire of the narrow-minded English middle-classes, the rage-filled and insular Basil Fawlty still feels fresh in the age of Brexit.

The rest of this list reeks of deja vu too. Following on Fawlty Towers' heels are other predictable titles: There's the Home Guard spirit of Dad's Army, of course, at number five ("remember when Captain Mainwaring accidentally told the Nazi officer Pike's name? Hilarious right?"). The painfully naff Only Fools and Horses is one below at six (“remember when Del Boy fell through that bar hatch? Hilarious right?”). These are two shows beloved for their comfort and warmth, rather than their comedic edge, and it's a similar story further down the list. Toothless sitcoms like The Vicar of Dibley, The Good Life and Gavin & Stacey give the overall list a middlebrow, conservative feel.

Which is a shame because there's plenty of boundary-pushing comedy in between the tired shows whose humour has been squeezed dry by endless repeats. We're delighted by I'm Alan Partridge's strong showing. Like Fawlty Towers, it ran for only 12 episodes, and like Fawlty Towers, it centres on a socially awkward man with severe status anxiety.

At the ridiculously low position of 13th is the most formally daring sitcom on the list: Peep Show. Following Mark (David Mitchell) and Jez (Robert Webb), two cripplingly co-dependent Croydon flatmates, the genius is Sam Bain, Jesse Armstrong and Andrew O'Connor show is it's shot from the point-of-view perspective of characters in the show. In addition to literally placing us in its characters' shoes, Peep Show also welcomes us into Mark and Jez's heads, and makes us privy to their bracingly honest and often abhorrent inner thoughts, which play on the soundtrack.

Similarly boundary-pushing in their own way was the brutally edited verite style of The Thick of It and the bracing banality of The Royle Family (Caroline Aherne and Craig Cash's show makes Gogglebox look like high drama). It's not just the modern shows that push the envelope, though. One of the spikiest and most innovative shows on this list is The Fall and Rise of Reginald Perrin, which follows Leonard Rossiter's middle-management type, who starts the series by escaping the rat-race by faking his own suicide and trying to reinvent his life, although he finds you can't escape yourself.

The list was compiled by a panel of 42 "expert judges", which included Father Ted writers Arthur Mathews and Graham Linehan, and Blackadder and Vicar of Dibley writer Richard Curtis. Father Ted was runner-up in the poll, incidentally, while Blackadder was fourth and The Vicar of Dibley 14th. Instead of voting for their own shows, perhaps Matthews, Linehan and Curtis should have been voting for the more innovative comedies that succeeded them, rather than pat themselves on the backs.

We'd have loved to have seen the absurd weirdness of The Mighty Boosh be recognised, or the twisted genius of Julia Davis with Nighty Night or Camping. And what about Matt Berry’s unhinged creation Steven Toast in Toast of London? The deadpan brilliance of Dylan Moran's Black Books? The mind-warping sci-fi shenanigans of Red Dwarf? The pop-culture riot of ideas that was Simon Pegg and Jessica Hynes' Spaced? The outrageous antics of Gimme Gimme Gimme, which should be recommended for Kathy Burke's garish performance alone? The absurd goings-on of Green Wing? The batshit horror spoofery of Richard Ayoade and Matthew Holness' Garth Marenghi's Darkplace? Or what about Nathan Barley, Charlie Brooker and Chris Morris’s prescient satire set among the ludicrous goings-on of Shoreditch's hipster media scene? And what about the two excellent comedies that just finished up their second series this week: Fleabag and Derry Girls?

Here in The Skinny office, we've taken the liberty of amending the list, swapping out the moribund titles for some of the team's favourites past and present

Off the list…: Father Ted, Blackadder, Dad's Army, Only Fools and Horses, Dinnerladies, The Office, The Vicar of Dibley, Gavin & Stacey, The Good Life, Whatever Happened to the Likely Lads?

To make room for some of our favourite overlooked sitcoms, we’ve cut a few of the overly-safe picks from the list. OK, older people thought WWII was hilarious, we get it. We’ve also shed a few of the more straightforward choices, cut a number of sitcoms on the grounds of nepotism as mentioned earlier… and dropped a few thanks to their creators’, how shall we put this, recent public statements. 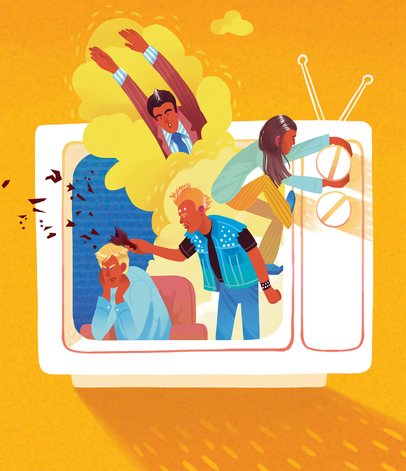 The stone-cold classics: Absolutely Fabulous, Fawlty Towers, Porridge, The Fall and Rise of Reginald Perrin, The Young Ones

These are programmes from long long ago (ie, prior to the late-90s) that still hold water. Big laughs, broad strokes, the occasional iffy line but deserving of their place in the canon.

Following many of the same conventions of the classics above, but with a modern twist – it could be the copious drinking and smoking of the title character, or the occasional musical break in the action. Maybe one of the characters is a tentacled ball-man who comes fully equipped with a papoose. Whatever it may be, these shows all have a little spark that sets them apart from their forebears.

These sitcoms take that spark and use it to burn everything and everyone. We're talking extended movie parodies embedded within episodes, entire series presented as a framing device for explaining on-set politics, horrifying bleakness, disgustingly venal characters and extreme swearing – these are the kinds of sitcoms that show what the format is capable of. Also, a lot of them were on Channel 4, which is comically underrepresented on the RT list. 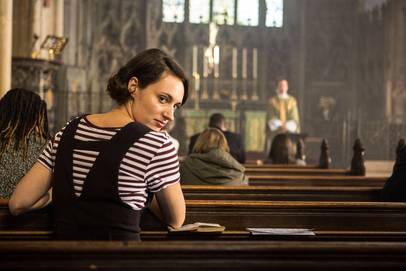 The ones you just missed on the telly: Derry Girls, Detectorists, Fleabag, Toast of London

These are the cutting-edge modern hits – a mixed bag of historical, confessional and farcical sitcoms that prove the format still has plenty of life. Sadly, no-one falls through a bar in any of them, but you can’t win them all.