Viewing Ratched through a humanist lens

With new Netflix series Ratched, the ever-prolific Ryan Murphy – along with newcomer Evan Romansky and Murphy's frequent collaborator Ian Brennan – enacts a world of institutional torture and medicinal control via septic green hospital wards and Douglas Sirkian melodrama. The show's eight hour-long episodes are an ode to cinema – complete with Bernard Herrmann’s Cape Fear score and De Palma’s use of split screens – but also to one of the most reviled villainesses in cinematic history: Nurse Ratched, made infamous by Louise Fletcher in Milos Forman’s adaptation of Ken Kesey’s One Flew Over the Cuckoo’s Nest.

Mildred Ratched (Sarah Paulson) is the rare female version of that classic character in American culture: the drifter. She is unmarried and childless, living in a motel that’s just as adrift as she is. It's a haunted, ghostly abode above the rocky sea in the California town of Lucia (‘light’), shrouded in just as much mystery as her past: who is she, and why has she come here?

Romansky, the show's chief creator, paints Mildred as the angel of mercy, and Paulson plays her as a subtle Jekyll and Hyde figure – brutal one minute and tender the next. What differs from the earlier adaptation is that she is cast here in an empathetic light. Mildred is a woman submerged into the patriarchal system where women can only wield power in snippets or behind backs. In Forman’s counterculture film, Randle McMurphy (Jack Nicholson) may believe he's taking on the tyranny of a cruel, unyielding bitch, but in reality, Nurse Ratched was told what to do, how to medicate and neuter her (mostly) male patients, by her male superiors. It's the same system!

Kesey described Mildred as a ‘castrator of a nurse’, and it is the misogynistic readings of her character – as the stern mother figure who won’t let Nicholson have any fun – that have prevailed. As with most cultural artefacts, women have become the scapegoat, the symbol of the horrors of a frigid man-made institution. Ratched shows that the real evil seems to be the barbaric medical system, as symbolised by the head of the hospital – and Mildred’s boss – Dr Hanover (Jon Jon Briones). Not only is Hanover under the thumb of Governor Willburn (Vincent D’Onofrio), a man hopped up on the electric chair, but also has a price on his head from his botched treatment of Henry Osgood (Brandon Flynn), the son of eccentric heiress Lenore Osgood, who's played with electric camp by Sharon Stone.

So why has Ratched become synonymous with cold evil? This can be answered with one word: femininity (and its expectations of grace, goodness, maternity). During the first and second world wars, nursing was a heroic act, one in high demand, and one of the few means of employment for women pre- and post-war, embodied by Florence Nightingale types with their elbows deep in the guts and blood of the trenches. Then, in 1948, The Snake Pit was released, showing the regimented bureaucracy of psychiatric institutions.

It not only utilises many of Dr Hanover’s pioneering techniques – hypnotherapy being one of them – but also starred a cinematic villain in Nurse Davis, creating the trope of the wicked nurse that has since been overshadowed by Louise Fletcher’s 1975 performance as Nurse Ratched, for which she won an Oscar (after many a Hollywood starlet turned down the role, not wanting to be that unlikable). Also, given how sadism is typically associated with men – violent sexual offenders, rapists, murderers – both in newspapers and on our horror movie screens, the novelty of a sadistic woman is milked for how truly shocking it is.

Despite Mildred standing in earlier adaptations as the symbol of conventional society, Ratched shows that our nurse rebels against the norm: her sexuality, her lack of children, and lack of a husband are all against the social mores of the time (the show is set in 1947), when it was not only frowned upon to be anything that wasn’t heterosexual, in a nuclear family with 2.5 kids, but downright illegal to be queer. Here, Mildred’s relationship with Gwendolyn Briggs (Cynthia Nixon) is the one force that peels back her ice-cold layers – and when embracing her sexuality, Mildred extends kindness to two patients punished for their lesbian trysts. 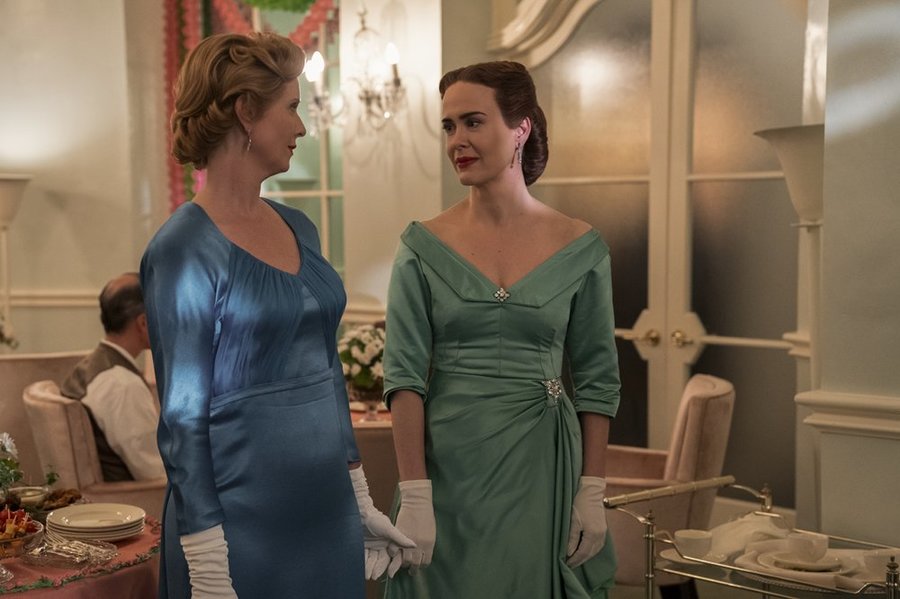 The monster movie visual gags keep the show from tipping into full empathy for its lead figure, though. Instead, consider the show a campily feminist whitewashing of the past, showing how women were tainted with the ‘crazy’ brush for their sexuality, their sexual orientation, their desires, only able to score power from beneath the floorboards, behind closed doors, muttered under breath.

While Ratched succeeds in painting its title character as a flawed-feminist symbol, it doesn’t do right by every woman in the show. It veers towards exploitation in its representation of multiple personality disorder (now called dissociative disorder), villainising and blatantly using this mental illness as a convenient plot device in the finale; and like a lot of Murphy’s vehicles, its on the nose politics paints with a broad brush, leading to generalisations, like that every bad act or person is motivated by a hidden trauma.

However, amid hired contract killers with secret identities, governors paying off the heads of psychiatric hospitals and doctors who torture their patients, Ratched makes us empathise with our eponymous anti-hero by making everyone else around her just as horrifying as she is. Or better yet, leading us to believe that she is a product of it all due to circumstances beyond her control, someone navigating the violence of the world in the only way she knows how.

Ratched is streaming on Netflix

Katie Driscoll is one of the participants in the Diverse Critics scheme, produced in partnership with Disability Arts Online and Creative Scotland