The two stars of Mindhunter, David Fincher’s latest project for Netflix that take us inside the minds of real life serial killers, tells us what it’s like working with Hollywood’s most demanding director

Say what you want about David Fincher, but he doesn’t do anything half-arsed. Not since the great Stanley Kubrick has there been a more demanding director. The stories of his exacting productions, which includes a liking for doing dozens of takes for even the simplest of scenes, is well known at this point. “I hate earnestness in performance,” Fincher told the New York Times in 2007 when asked about his exhausting approach. “Usually by take 17 the earnestness is gone.”

Not all actors respond to this way of working. Jake Gyllenhaal, who starred in Fincher’s 2007 masterpiece Zodiac, described the director's method as “painting with people,” and added that “it’s tough to be a colour.” In other words, if you’re working on a David Fincher set, you better have stamina.

An actor who’s had to learn this recently is Jonathan Groff. The 32-year-old is a familiar face from stage and screen; he starred in Andrew Haigh’s perceptive queer drama Looking, had a recurring role on Glee and voiced Kristoff in Disney's hit Frozen. You’d have also found him playing King George III in the original Broadway run of Hamilton. There’s no singing and dancing in Mindhunter, however; Fincher’s slow-burning 1970s crime drama following two FBI agents traveling the country studying America’s most notorious mass killers.

Groff plays Holden Ford, a wide-eyed young hostage negotiator who wants to shake up the agency which has barely changed from when J Edgar Hoover was director. There’s a new breed of killer in town for whom the traditional tenets of criminal investigation – “means, motive and opportunity” – are no longer applicable. These murderers kill multiple times and for reasons other than bloodlust. We now know them as serial killers, and Mindhunter follows Ford and his more cynical partner Bill Tench (Holt McCallany) as they try to understand what makes killers like Ed Gein, Ted Bundy or the mysterious Zodiac Killer (who Fincher explored in Zodiac) tick. 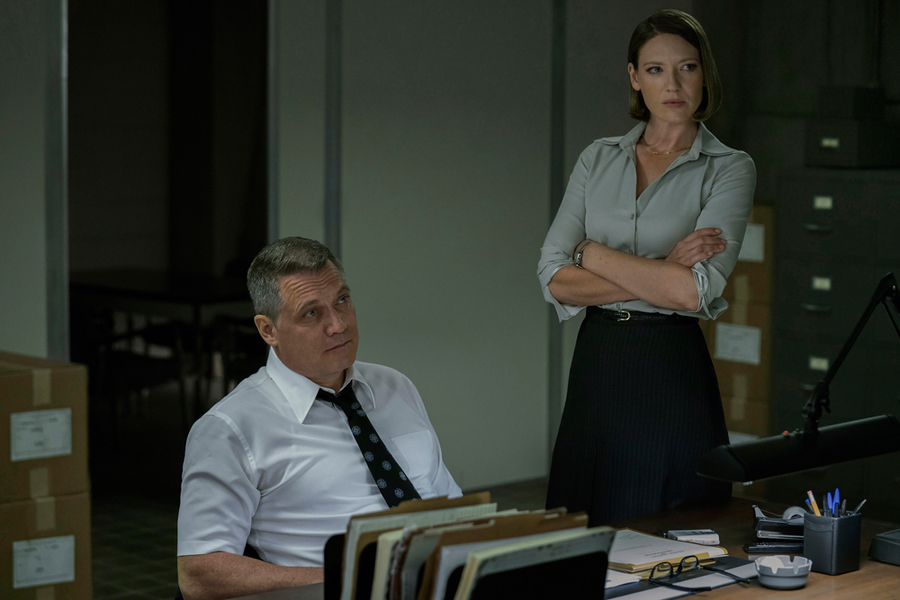 The first two episodes of Mindhunter previewed at London Film Festival, and when we meet Groff at a London hotel ahead of the screenings, he bounds into our room with a beaming smile and sunny disposition that doesn’t suggest he’s spent the best part of a year exploring the darkest of human behaviour. Reportedly Fincher had to temper this enthusiasm on set too: the director is said to have started every take with the words, "Ready? Jonathan, stop smiling. Action!"

Groff rocks back in his chair laughing at the recollection. "I think [David] knew that was one of the things he was going to have to drum out of me, my innate desire to be likeable," he says. This is a perfect example of the Fincher technique, Groff tells us: it’s a small technical note that represents a multitude of things. “It seems like a small detail, but not smiling was a huge challenge for me. So much so that looking back at the show I didn’t recognise myself, and I thought, ‘Wow, David, I was actually acting, how interesting. Thank you for leading me to that.’”

As for Fincher’s penchant for multiple takes, Groff seems to have fared better than Gyllenhaal. “[David] is very practical and pragmatic, and he talks about problem solving when we’re doing the script and blocking the scenes, so there’s nothing mysterious about his process, it’s all very logical. It’s not like we do multiple takes and we’re like, ‘Why are we doing this again?’ With every take you know he’s perfecting it, whether it’s a writing thing David’s tweaking, or something with the camera. He just wants it to be a good as it can be on that day.”

Groff’s co-star McCallany is well aware of this process. The 54-year-old New Yorker appeared in Alien 3, Fincher’s first feature. He also crops up in Fight Club and murders Madonna in the director’s promo for the pop star’s 1993 single Bad Girl. When we chat to McCallany, he describes landing this lead role in Mindhunter as feeling like he’s “graduated”. We wonder if Fincher has changed much from the young blade who made Alien 3?

“In those days, David was considered something of a wunderkind,” McCallany recalls. “He was the highest-paid first time director in Hollywood history, hugely successful career directing commercials, directing rock videos, an incredibly bright and gifted guy… But if you ask me the question, How is he different? The honest answer is, he’s the same guy. He’s much more accomplished, much more successful, but his approach is the same.” 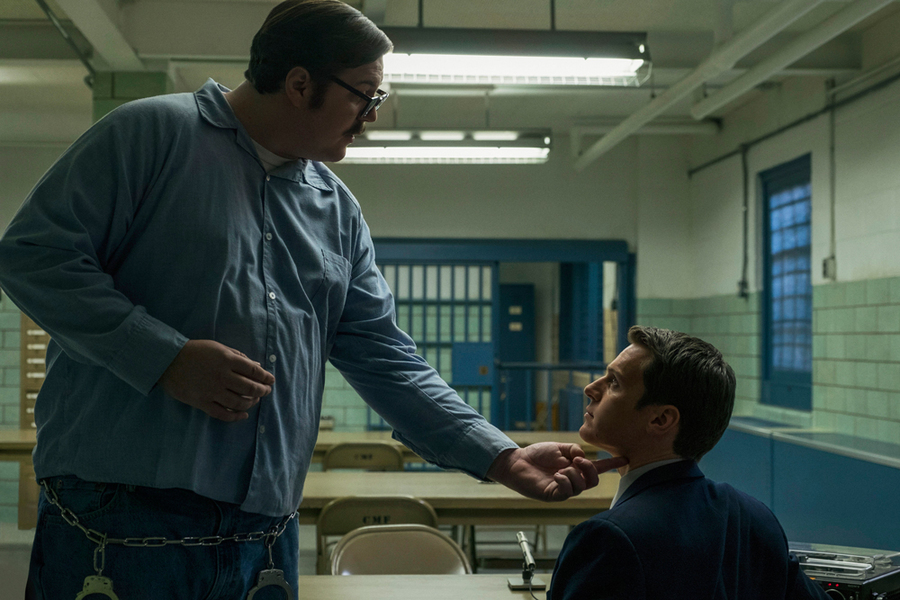 McCallany does confirm that a Fincher set can be pretty gruelling, however. “He’s a very meticulous guy, very driven to make things as good as they can possibly be, and we’re going to stay there and we’re going to keep working until David feels like he has it.”

You can see this graft and attention to detail all over the resulting series, which is as silky and sinister as Fincher’s two finest films to date, Zodiac and Seven, which also delve into the mind of serial killers. And like Zodiac, Mindhunter is concerned with true life events. The show is based on Mind Hunter: Inside the FBI’s Elite Serial Crime Unit, a nonfiction account written by pioneering FBI profiler John Douglas, who interviewed some of America’s most notorious murderers over the course of his 25-year career in the FBI. Groff plays a fictionalised version of Douglas, but the criminals in the show are very much based on real serial killers.

Rather than hunting down these antagonists, they’re already behind bars for the crimes they’ve committed. Instead of car chases, gunfights and grim autopsies, most of Mindhunter involves people talking in offices, cars, bars and prison waiting rooms. In the two episodes that premiered at LFF, the focus is on Edmund Kemper, who’s better known as the “Co-ed Killer”, and the most chilling scenes come with him discussing his methods for murder over an egg-salad sandwich. If you’re looking for the Grand Guignol excesses of Hannibal, you’ve come to the wrong show.

“It was very important to David that we told the story in as authentic a way as possible,” explains McCallany. “So that means not the stylised Hollywood serial killers that we’ve seen that are tremendously witty and charming guys, because most of them are not like that. Most of them are these fractured and tormented and depraved and sad, sadistic men, and David wants to show them how they really are.”

Fincher directed four of the ten episodes of Mindhunter, with other directors like Asif Kapadia and Tobias Lindholm taking on the other episodes. Despite these additional interesting filmmakers behind the camera, this will be very much a Fincher product. “We all kind of felt – the actors, the crew and even the directors – like we were in Fincher School a little bit,” says Groff, “all sort of trying to fulfill David’s vision. The other directors who came in weren’t like, ‘and now I’m doing my take on this show’. It was all under the umbrella of the vision of Fincher and the visual vocabulary and tone of the show he’s set up.”

While everyone on the team has been tight-lipped about further seasons of Mindhunter, McCallany has every faith that if Fincher wishes it, there will be more. “I’m very optimistic for us, because I know it’s important to David that our show be successful, because he is so driven and he is so meticulous, and when he decides that he’s going to put his great intelligence and his energy behind something, then he usually succeeds. I think that he would be successful in any walk of life. If he was the coach of an NFL football team he would have three Super Bowl rings, and if he was a general in the army he would have victory after victory. It’s just who he is. He’s a leader, and he really knows the filmmaking process.”

Mindhunter is streaming on Netflix from 13 Oct