Living in Sydney, Australia: A Guide

It's sunny, they speak English and they have weird and wonderful animals. What's not to love about Australia? Sydney is the country's largest city and boasts beautiful beaches and incredible wages.

Just as Scotland has its Edinburgh vs Glasgow debate, Australia has its Sydney vs Melbourne argument. Sydney is the business-centric city with warmer temperature and better beaches. Melbourne is the more artsy place, with better dining and entertainment options. For visitors, Melbourne has a much more European feel while Sydney is definitely the more Australian of the two, especially when you see its famous icons.

The local music scene is popular, but again Melbourne trumps Sydney for success and experimentation. Radio station Triple J is the best place to find out about Aussie talent, although if you're getting a bit older you might want to try Double J instead. The culmination of the music year happens on Australia Day – 26 January, the day after Burns Night – when Triple J plays a countdown of the top 100 songs from the last year and everyone in the country gets smashed.

Because it's so far from Europe and America, you won't see as many big artists touring here. When they do come, though, there's a great chance they'll come to Sydney for a show, but be prepared for exorbitant ticket prices.

One of the first things I noticed about Sydney was how insanely expensive beer was. In a cheap bar you could find a glass of the watery lagers they love over here for $6 (a touch over £3) but more often it would be two or three dollars more. That's not for a pint either; in New South Wales the standard measure is a schooner, which is around three quarters of a pint. So you're paying more to get less of a worse quality product. It's alarming how quickly you get used to that size of beer, and how much of a novelty a pint seems when you stumble across the odd pub that serves that measure.

Two words of warning about schooners. Foster's? Australian for beer? I've only ever seen it once, in a bar aimed at backpackers. It may not be far off what you'll be getting, but don't ask for it if you want to try and blend in. And you know how everyone says Guinness tastes much better in Dublin? You may even have been over and thought it was a shade nicer. Once you try it in Australia you'll learn where the saying comes from. The Black Stuff that gets exported here is far from what you'll have had before.

Another issue with nightlife is that the city is currently experimenting with lockout laws in an attempt to combat increasing levels of alcohol-fuelled violence. This puts limits on when you can buy takeaway drinks, when you can order shots and when you can get into clubs, which has upset a lot of people without seeming unnecessarily harsh. The casino operates under different laws, but going to a gambling establishment in the early hours of the morning can only ever lead to disappointment. 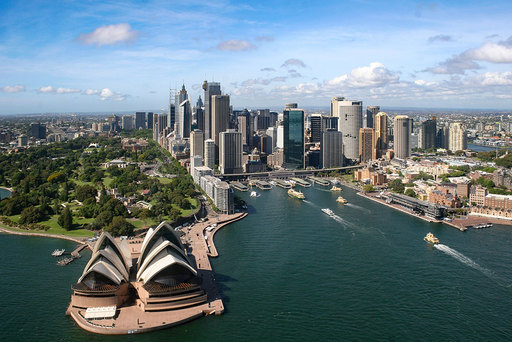 Finding a place to stay

As well as booze, rent is another huge expense. I paid $400 (around £200) a week to live in a one-bedroom granny flat in someone's back yard, half an hour out of town on the train. I got a good deal. If you want to live centrally or by one of the beaches, expect to pay a lot more. Finding a rental property isn't much different to the UK – Gumtree is popular here and there are plenty of letting agents – but without any rental history Down Under you may have to go through a private advertiser.

As a general rule, the CBD and the beaches are the most expensive, to the north are the well-to-do areas, to the south you have the trendy and hipster areas (so long as you don't go too far) and to the west you have your cheaper areas. Expats seem to congregate mainly around the beaches at Bondi and Coogee.

Public transport is decent in Sydney, if not a little expensive. Pick up an Opal card (similar to London's Oyster card) from a newsagent and you'll be able to use that on all modes of transport. Trains circle the CBD and head out in all directions, with buses picking up the slack. Ferries run from Circular Quay (home to the famed Opera House and Harbour Bridge) to many waterfront suburbs, and trams operate in parts of the city too. There used to be a monorail, but it was more of a tourist attraction than anything, and it closed down in 2013.

Getting around Australia is a harder matter, because of its huge size. Many travellers don't appreciate just how big it is, but the mainland is roughly the size of the USA. To put things in perspective, Tasmania, the tiny island state to the south, is a bit bigger than Scotland. Driving to Newcastle takes a couple of hours, but going to Melbourne will take you closer to 12. If you want to see other cities, you're normally best off booking a flight.

Santiago: why you should move here

"Come to Seoul. It's a fucking gas"

Summers can be extremely hot. It's one of the perks of the country and great if you're on holiday, but it can be overwhelming if you're not used to it, which you're not if you've lived in Scotland your whole life. A couple of years ago I was at a music festival when the temperatures hit 47 degrees. Sheer lunacy, especially if you were brave enough to enter a mosh pit. Beaches, pools and air con will be your saviour, but getting between the three can be a sweaty hassle. The trains and buses come with air con, but it doesn't always work.

Bondi and Manly are the most famous of the beaches, and both are great if you want to surf, but both are normally absolutely packed. Because of its coastal location, there are plenty of quieter beaches around Sydney if that's what you prefer. Nudists can head to Lady Grey Beach, near Watson's Bay.

As the seasons are reversed, Christmas is celebrated as summer is starting to get going. Instead of a white Christmas with cosy fireplace gatherings and a huge roast dinner, festivities are taken outside. Barbecues are the norm and cricket on the street or a trip to the beach are often included. The decorations are the same, and you may look in puzzlement at the snowflakes and snowmen adorning trees and cards while sweat drips off your brow.

Sydney's winters can be rainy, but in all honesty they're not far off a standard Scottish summer. Most of the time you won't need long sleeves, never mind a jumper, but the days are much shorter. The locals will complain about the freezing temperatures but try not to scoff when they do so.

I've focussed quite a bit on the expenses, but here's the good thing: the wages. I did pretty much the same job in both Edinburgh and Sydney, and ended up getting paid about 2.5x more in Australia. Most things are more expensive, but not to the same extent so you'll find your weekly salary more than covers the difference.

A couple of years working in Sydney will give you plenty of time to save up. You have as much chance of being able to afford a house in Sydney as in London, but if you move back home or head way, way out into the suburbs you'll be in good stead.

One thing that many people expect from Australia is to see kangaroos bounding down the street and koalas in every tree. Sadly, this isn't the case. As with any city, wildlife is scarce, so you'll have to drive into the country to see these creatures. In Sydney you're more likely to see possums and ibis birds, both novelties for the newcomer but considered pests by the locals.

The lack of animals spreads to the nasties as well. Snakes are extremely rare (unless you live near bushland) but you will see plenty of spiders. To confuse you, the most dangerous ones are generally small, while the huntsmen, which look like mini-tarantulas, won't kill you but are great for keeping flies and mozzies at bay. If you happen to get bitten by a spider, get to a doctor or medical centre quickly. All spiders here have the same venom which means one antidote for the lot, and there have been no recorded deaths from spider bites since the 1970s.

There's the odd news report of a great white shark off some of the beaches, but you're more likely to see migrating whales or a pod of dolphins go harmlessly by.