Living in Copenhagen: A guide

If you can get past the bureaucracy, the Danish capital offers a life that blends the great outdoors with top-notch drinking and nightlife

If you’re thinking about moving to Copenhagen, well, good luck. This beautiful, cool, safe city is becoming increasingly inaccessible to people from outside the EU which, and we apologise if we're the ones breaking the news to you, could soon include you. The hard-line Danish immigration minister is in the process of making moving to Denmark as difficult and unattractive as possible. Copenhagen is generally more liberal than the rest of Denmark, and votes accordingly, but the national mood over the country these past few years is causing the door to this fine place to gradually close.

Even immigrants from within the EU will face some institutional barriers. Most government agencies in Denmark are fond of a bit of Kafkaesque bureaucracy, so be prepared for some head-breakingly frustrating regulations. You won’t be able to open a bank account without a Danish ID-number (CPR), but you need an address to obtain a CPR. The punchline is – and we're sure you saw this coming from a mile away – it’s impossible to get a flat without a bank account.

Getting a job is the key to breaking apart this riddle. If you manage to sort out a job before you get here, then you’ll be able to get a CPR and things will fall into place a bit more easily. Or alternatively you could study. It’s free and even international students are eligible to apply for government support. Regardless of how you do it, the system can be tough to break in to but rewarding once you do. Generous parental leave, sick pay and holiday entitlements are the promised land for forty years of form filling. These come at the price of being one of the highest-taxed places on earth, but if you avoid studying your payslip too closely it seems a price worth paying.

Finding a place to stay is tough too. Social media is probably the best way to find a rented room or flat, particularly Facebook. No matter where you end up, you can be guaranteed that the bathroom will be tiny, more than likely with a shower that’s pretty much on top of the toilet. If you manage to find a reasonably priced place with a bath, then you’re either extremely lucky or a blatant liar. 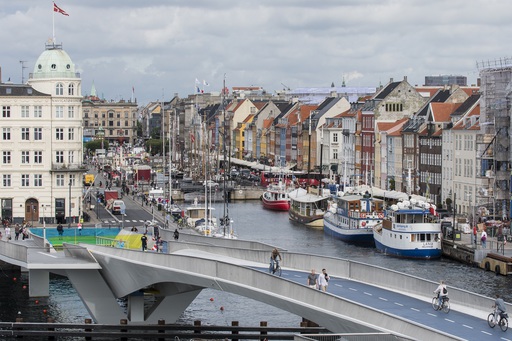 The people of Copenhagen

Danes tend to feature highly on lists of life satisfaction, happiness indexes and so on. If you spend an afternoon in Copenhagen, strolling about the parks and harbours, and through the mix of contemporary and 17th century architecture, the reasons for this happiness will become apparent. You’ll spot a million reasons why people should be happy but we bet that the first impression you’ll get of Copenhagen residents is that they’re a fucking grumpy bunch.

This brusqueness isn’t a symptom of an underlying dissatisfaction or unfriendliness, rather it comes from Danes’ rejection of small talk. People are to-the-point, to the point of insult. There isn’t even a word for please. You’ll hear people say ‘må jeg bege om...’ – literally ‘I’m begging you’ – but that’s not quite the same. However, and without wishing to go down the road of stereotyping entire nationalities, underneath that gruff exterior lies a heart of gold. It’s not that the people aren’t nice, they can just be a bit tough to break down and tend not to be too chatty with strangers. Let’s just say they’re a bit more Edinburgh than Glasgow in that respect.

Nightlife and LGBTQ life in Copenhagen

You know how we said three sentences ago that we wouldn’t stereotype the population of an entire country? Well, we've changed our mind. Danes like a drink. Happily, there’s lots of places where you can join in. At the bottom of the budgetary scale are an abundance of cheap bodegas. These are invariably brown, smoky rooms populated by middle-aged men playing dice (you might also find a table or two of hipsters). The smokiness comes from actual cigarettes, because pubs under a certain size can allow smoking if they want to (and they all want to).

At the opposite end of the scale you’ll find plenty of cocktail bars more than happy to empty your wallet. The cocktail scene in Copenhagen is serious and seriously good. Throughout the city you’ll find places with radically different moods and clientele – Ruby and The Barking Dog are two to check out. In between these extremes there’s a burgeoning craft beer scene, led by the impeccable breweries Mikkeller and Brus. The beer epicentre is the rapidly gentrifying Nörrebro area.

Copenhagen’s also a fantastic place to be gay; the LGBTQ scene is huge and constantly evolving. As well as the bars and clubs on Studiestræde and elsewhere, there are a couple of events that tie things together. Copenhagen Pride is in August, and is palpable throughout the city all weekend. Perhaps more noteworthy is Copenhagen MIX, one of the oldest LGBTQ film festivals in the world. It’s held in November with some extra open air screenings in the summer. How does Stranger by the Lake in Ørstedsparken sound? That might be a specialist taste, but regardless of your sexual orientation you’re probably going to end up at Cosy sometime. It’s open till 8am for when, for whatever reason, you don’t want the night to end.

Danish is a difficult, weird-sounding language. It’s the pronunciation that makes it so tricky. A language so extraordinarily guttural, that there’s a fine line between speaking and expectorating. Did you know that a handful of Danes die preventable deaths every year because on-lookers fail to distinguish between asking for directions and choking on a sandwich? Obviously you didn’t know that because we just made it up, but it feels quite truthy. The joke in the other Scandic countries is that Danes speak as if they’ve got a potato in their mouths. This isn’t a funny joke, but it is fairly accurate (Danes are by far the funniest Scandinavians so don’t let this example of regional banter dissuade you from coming).

Need you bother yourself with such a troublesome language? Well, most people between the ages of 12 and 70 can speak pretty good English and you can find work in the tourist and hospitality industries with English alone. On the other hand, as much as they might enjoy speaking English, people tend to slip back into Danish after a beer or two, and, as we might have mentioned, most Danes take a drink. Fortunately, free Danish lessons are available at different levels of expertise and intensity. As well as their intrinsic value, these lessons are fantastic for meeting some of the diverse peoples arriving Copenhagen for reasons of love, work or war.

Cycling and the outdoors

You really need to get yourself a bike. People cycle everywhere. This is partly because of high taxes on cars and partly because cycle lanes are built into the infrastructure, but it’s mostly because it’s an ingrained cultural norm. You live in Copenhagen, you cycle. The number of cyclists is just staggering. Hazardous too, if you forget to look where you’re walking.

Buying the right bike involves a tricky balancing act. You want a decent bike if you’re going to be using it every day, but you don’t want something so good that’s it going to get stolen ten minutes after you’ve bought it. Bike theft is very common, in a city with otherwise relatively little crime. Mind you, this writer's current bike is pretty decent and has lasted 3 years now with only a stolen saddle to report (and that was pinched from the Roskilde music festival rather than in Copenhagen). You should probably wear a helmet but few people do, and you’re also going to get severely wet occasionally (Copenhagen weather, sadly, is only a slight upgrade on central Scotland). 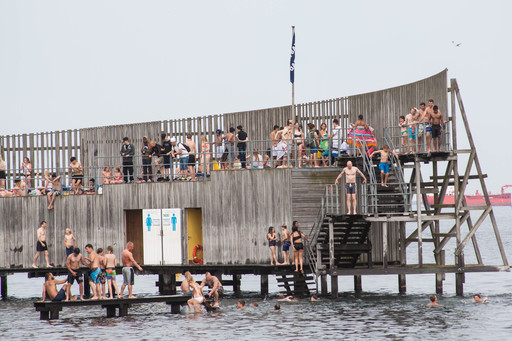 As well as cycling, people in Copenhagen really seem to enjoy active outdoor lives, even in the city centre. There are tons of parks, from the seemingly never-ending Fælledparken to wee bits of greenery that have been snuck into unexpected places. There’s lots of places to skateboard, play football or slide down a chute depending on your preference, age and level of inebriation.

But really, the pinnacle of outdoor life in Copenhagen is swimming in the harbours at Amager Strand and Islands Brygge. On a hot summer day (and you are guaranteed at least a couple every summer), it’s an unmatched delight. Get down there and show off your peely wally body posthaste.

Danish design is largely about functionality and simplicity. Decorative things need to serve a purpose, and not be over-designed or unnecessarily frivolous. This distaste for excess spans across jewellery, ceramics and clothes – you’ll see it reflected in the independent shops and markets across the city. Copenhagen people are stylish in the same way. Sleek but comfortable is the rule here, and go easy on the make-up. Even in fanciest of places you’re likely to see more trainers than stilettos, and fashion is understated and subtle. That’s not to say there aren’t a few normcore tragics lurking around but in the spirit of diversity and inclusiveness that Copenhagen fosters, this should be tolerated as best one can.