Nip to the flea market for some teeny vintage tortoiseshell specs and practice saying ‘dramaturgical design’ in a mirror, because we’re going to show you three of the city’s most exciting stages. Now, before we head out, here’s what you need to know: Berlin takes performing arts extremely seriously, and ten of the city’s theatre venues are entirely state-funded. This affords them a creative freedom almost unimaginable in the cash-starved arts climate in the UK, and encourages artists to take a gamble on weird and provocative stagings.

Most theatres are ensembles, which means they have a repertoire of regular shows during a season – i.e. you’ve got several months to catch a show you’re interested in, rather than just a week or two. And we know you don’t speak German, and the Germans also know you don’t speak German, so several of Berlin’s best theatres offer surtitles (like subtitles, but for theatre) in English, French, Turkish, and sometimes Spanish. It’s also affordable – you can usually get a ticket for any of the major theatres for ten euro or less.

Blood, nudity and sharp aesthetics are a norm, and a four-hour show is no big deal. Audiences here are unafraid to voice their opinions, loudly; at least three encores are a standard (even if they’re punctuated by enthusiastic booing) so prepare to clap for far longer than feels necessary. Neck an espresso, don a black turtleneck, and let’s see some art.

First stop, the Schaubühne am Lehniner Platz. This low, sweeping building at the top of the bustling Kürfurstendamm is a staple of West Berlin theatre. Founded in 1962, it moved to its current premises in 1991, and is fuelled by youth movements, innovation, and an interest in physicality. A monochrome marketing campaign and a strong emphasis on design means that this theatre’s always looking slick, and its café is the perfect spot to people-watch for heavy hitters in Berlin’s arts scene.

Celebrated directors like Thomas Ostermeier, Milo Rau, Katie Mitchell and Herbert Fritsch showcase their work here, and they even have a resident academic to blog-splain the creative genius of the Schaubühne’s team – perfect for swotting up before a show, if you really want to impress. Expect lots of live video work, impressive sets and nuanced politics, and tickets that start at just 7 euro. 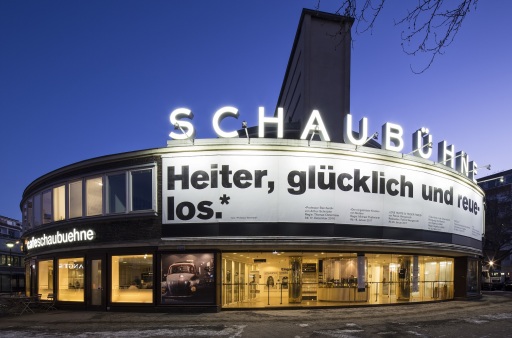 Gorki Theater: a platform for discussion

Next, the Gorki Theater: as maximalist as the Schaubühne is streamlined. Garish, hip and home to Berlin’s most consciously diverse creative team, the Gorki describes itself as the “smallest and most beautiful” of all Berlin’s state-funded theatres.

It’s aptly situated on Unter den Linden, the grand, tree-lined road that connects the TV tower and the Brandenburg Gate (two of the city’s most famous landmarks), as it mixes a historical conscious with an unstoppable drive to confront contemporary events. Named after Maxim Gorky, a Soviet socialist activist, the Gorki remains a proud platform for discussion, and artistic director Shermin Langhoff insists that it represents the myriad stories of Berlin’s multi-cultural citizens.

Don’t enjoy sitting in a darkened room? Rimini Protokoll could be your deal. Straight up the best in the game when it comes to form-shifting, location-specific theatre, an evening with Rimini Protokol could involve almost anything. The prize-winning company are based in HAU – itself a three-roomed contemporary theatre complex that’s absolutely worth your attention – but are usually found touring the world.

Find yourself listening to a story in the back of a truck, or take a ‘walking tour’ of Berlin, guided by a disembodied digital voice that’s mysteriously plugged in to the city’s grid. A Rimini Protokoll work pokes holes in systems you’ve taken for granted – whatever you strap in for, you’ll see the world differently afterwards.

Lastly, if standing centre stage feels more natural to you than sitting in the stalls, try English Theatre Berlin – a warm and welcoming English-language company which often holds open auditions, as well as offering lots of opportunities to volunteer behind the scenes of their in-house creations.