Why an apology isn't enough

Barrington Reeves has experienced more than his fair share of disturbing professional experiences, from being assumed to be an intern to being asked if he only does 'hip-hop brands'. After years of these racist tropes he realised that the problem was not simply going to fix itself or go away. There was no one else in the Scottish industry equipped to unpack the issues and put them in front of the right audiences to gain the traction needed.

Reeves began to put frameworks in place to shed light on issues that had been affecting him and countless others. In 2020 he co-launched BLM Scotland, The Black Scottish Business Fund and grew his design agency, Too Gallus, by 300%.

There comes a point where an apology just isn’t enough.

In the early hours of Saturday, Scottish communications boss Gordon Beattie – chairman and owner of Beattie Communications – shared a LinkedIn post to his thousands of connections which, to put it bluntly, was nothing short of tone deaf, insensitive and utterly unacceptable. I refuse to quote his post, so have attached the screenshots for your information. The language used goes past causing offence – it is absolutely abhorrent. To think that it came from a man who apparently specialises in communications of all things absolutely beggars belief. 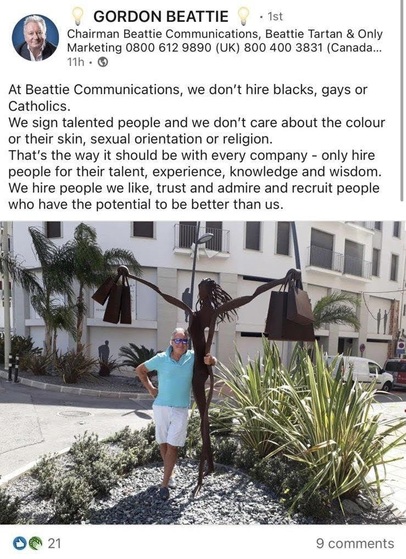 You might already be familiar with Beattie Communications, the UK-wide, marketing juggernaut with over 100 employees which has been firmly rooted in the marketing world for over 32 years. But for those who are unfamiliar, their roster of clients includes Specsavers, Iceland, Cala Homes, Seven Seas, Vue and many other household names.

However, the more troubling aspect of the post is not the language, but the seeming absolute lack of understanding about the socio-economic factors which surround hiring and HR.

All talent is not created equal.

It is well known that there are countless barriers to entry in the creative, business and entrepreneurial world for those from marginalised communities. Gordon’s post essentially said that, when hiring, he ignores all of those factors and is more than happy to be pitting people against those who have benefited from a lifetime of privilege without acknowledging the difference.

The use of the term ‘gays’ in Gordon’s status points to a much larger lack of understanding surrounding the LGBTQ+ community. Labelling them all as 'gays' would be an immediate flag that his outdated education on the subject stops at homosexual people; in recent years we have seen a massive call for workplaces to be much more supporting of those across the LGBTQ+ community, including those who are gender non-conforming, non-binary and trans.

As the leader of a juggernaut in the Scottish marketing world it would be expected that Beattie Communications should be leading by example and going above and beyond to create accessibility and routes to careers for those from marginalised communities.

It should not be my job, as a 29-year-old agency owner, to educate him on the nuances of equality and diversity. Yet time and time again we see these pillars of change come from within the oppressed communities most affected.

Oftentimes we see the responsibility of changing these attitudes falling on the shoulders of those most adversely affected by the problem, though we are frequently the people who are least in the position to make these changes. Too often do we only see marginalised communities being asked for their opinions when it is profitable or marketable (Pride, Black History Month, BLM and other virtue signalling events). The responsibility should fall at the feet of those in power, for these industry leaders and decision makers to take up arms, look inward at their hiring practices and workplace cultures and ask if they are doing enough to remove barriers to entry and create pathways for future diverse talent to blossom.

In order to move forward in an effective way it is essential that heads of industry understand just how damaging language like that is, how they play into a much more dangerous bigger picture and how they embolden those that seek to keep opportunities away from those in marginalised communities.

It is essential that we call out these horrific events at every turn if we want to see genuine change within our industry. There is simply no excuse to live under the guise of ignorance or 'well meaning' any longer.

• 48% have done unpaid work at some point in their career.

• 78% of all the creative media workforce are now graduates; over half (51%) of these graduates hold a creative/media degree.

• 14% of respondents attended an independent/fee-paying school (compared to 7% in the wider workforce).

These statistics begin to unpack some of the reasons why it may be hard to reduce the subject down to "we hire talent". Talent is something that must be nurtured and created – and often in our industries we confuse talent with experience. Those from marginalised communities, and specifically the black community, are generally far less likely to come from independent schools or higher education, and are the least likely to be able to afford to do unpaid apprenticeships or placements.

The means to go down the freelance route depends on contacts and one's financial situation, a tricky route in the best of circumstances and one out of bounds to anyone from a working-class background, especially as a graduate. Freelancing though is probably the best way to get a studio or agency's attention as a newbie – if studios can remove the financial barrier to entry, then it's one helpful step in the bringing of diversity to the creative economy.

I would like to use this moment as an invitation to all industry leaders to open a dialogue about what you could be doing within your company and practices to make sure you are creating open, welcoming and diverse teams which empower the communities you profit from. Only by having these difficult and sometimes uncomfortable conversations can we start to build better, fairer creative industries for everyone.

An apology simply is not enough – we need positive action to show that education has taken place and that necessary training and structures have been put in place to ensure a fair hiring process that will lead to a diverse workplace.

An apology is a start, but where do we go from here?

For anyone who would like to get started immediately I would encourage you to follow this Five Point Toolkit to help recognise unconscious biases which may be affecting you right now.
Creative industries guide to creative diversity
#pullupforchange
makeitblack.org/