Think through climate justice, anti-racist politics, and community at Lighthouse Bookshop's Book Fringe this week. Elsewhere, When Chai Met Toast come to Scotland for the first time, and So You Think You're Funny kicks off at the Fringe.

Bibliophiles: there’s more than one festival for you this month. Put on by beloved indie bookshop Lighthouse Bookshop, Book Fringe is a series of lunchtime conversations taking place in the idyll of the bookshop garden from 5-12 Aug, themed around ideas of nature writing, climate justice, place & belonging, language, legacies, all rooted in anti-racist, feminist and environmentalist politics.

We’re especially excited about Said the Dove to the Olive Tree, a short film screening by spoken word artist Amira Al Shanti which explores the intimacies of Palestinian belonging, and a talk on sustainability and creativity with Rebecca Tamás, Adrienne Buller and Jessica Gaitán Johannesson.

All the talks are free (with a small optional donation), and tickets can be reserved through the Lighthouse Bookshop website. See you there!

ADVERTISEMENT | The Twenty-Sided Tavern
Pleasance Dome, Edinburgh, until 28 Aug
Adventure is calling and you control the story. Every night is a new adventure where you choose the characters, what paths they take and how hilarious their hijinks will be. Battle monsters and solve puzzles in this raucous comedy that might involve dungeons, might include dragons, and is always unique and engaging. Grab your friends and your smartphone and embark on the journey of a lifetime.

So You Think You’re Funny
Gilded Balloon Teviot, Edinburgh. 3-29 Aug, various times
We promise this is not the set-up to a joke, but what do Aisling Bea, Lee Mack, and Romesh Ranganathan have in common? They’re previous winners of So You Think You’re Funny, Gilded Balloon’s seminal annueal comedy competition! Ft. seven heats, one grand finale, and appearances from alumni throughout the Fringe. Image: Andy Hollingworth.

EHFM Festival Party
Sneaky Pete's, Edinburgh. 6 Aug, 11pm
Beloved Edinburgh-based community radio EHFM and Sneaky Pete's are throwing a festival party this weekend and you (yes, you!) are invited. With three of the city's most exciting up-and-coming producers on the rosta - naafi, Pelk and Sweet Philly (pictured) - this is club music at its most joyous. Expect high octane drum beats and sugar sweet pop edits until 5am. Image: Sweet Philly / EHFM. 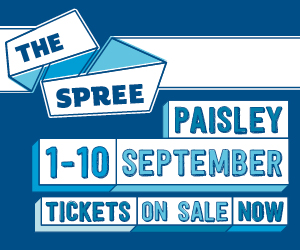 This August, pamper yourself at PURE Spa & Beauty’s Edinburgh salons with 25% off of treatments and 10% off products.

For T&Cs and details on how to redeem your reward, please visit Forever Edinburgh.

ADVERTISEMENT | PSYCHODRAMA
Traverse Theatre, Edinburgh, 4-28 August
A gripping, at times hilarious revenge play by Matt Wilkinson about a fortysomething actress under investigation for the murder of an auteur theatre director. Set against the backdrop of a stage production of Hitchcock’s Psycho, Emily Bruni (Peep Show) plunges us into the dark heart of show business. #PsychodramaThePlay