Get in the festive spirit this weekend and get your Christmas shopping done early at one of many Christmas markets taking place across Scotland. Plus, gigs from Aldous Harding and IDLES, the Lyceum give A Christmas Carol an Edinburgh twist and more...

In honour of it being the last pay day weekend before Christmas, every *non-explicit description of a person* and their dog is putting on a Christmas market this weekend.

The first two editions of Super Market’s Christmas markets take place over the next week or so at The Engine Works (1 Dec), QMU (7 Dec) and Drygate (8 Dec), but the Tramway edition (14-15 Dec) later in the month looks set to be particularly special. Taking place inside the venue and making use of its outdoor Hidden Gardens, the market is sure to get you in the festive spirit.

If you’re looking for a proper Christmas day out for all the family, look no further than Jupiter Artland’s Christmas Fair. It might cost slightly more than your average Christmas market, but you’re getting a full-blown Christmas extravaganza with donkeys (real), elves (fake), Santa’s Grotto (debatable) and a variety of stallholders and food vendors.

Christmas Fair weekend continues in Dundee at Verdant Works’ Winter Fayre, where not only can you get your Christmas shopping done, you can celebrate Scotland’s history too. Taking place in a refurbished jute mill, the fayre will host a variety of artists and designers over two days, celebrating the work of independent Scottish creatives.

Aldous Harding
Summerhall, Edinburgh, 1 Dec. 3pm & 7:30pm
Auckland crooner Aldous Harding delighted Scottish fans when she added an extra matinee show to the Edinburgh stop on her UK tour due to phenomenal demand after tickets for the evening show swiftly sold out. Touring in support of her latest and third record, Designer, prepare to be entranced by Harding’s haunting, goth-folk sounds. Image: Clare Shilland

IDLES
Barrowlands, Glasgow. 2 & 3 Dec, 7pm
They might have missed out on the 2019 Mercury Prize, but IDLES won the award in all of our hearts for most memorable performance at the awards ceremony. On their second album, Joy as an Act of Resistance, the Bristol band address themes of grief, addiction and toxic masculinity, to name just a few, and their live show is a truly explosive and jubilant affair. Image: Lindsay Melbourne

ADVERTISEMENT | Christmas at the Botanics
Royal Botanic Garden, Edinburgh, 22 Nov-29 Dec, times vary
There's something for everyone here as the one mile sparkling path winds its way through Edinburgh's Royal Botanic Garden. Discover all new installations; a Laser Garden where dancing lines of light play amongst the trees; the Festive Flotilla, hundreds of glowing boats gently bobbing on the water. The fantastic Tunnel of Light and the Scented Fire Garden both return. The trail ends with the Inverleith House Festive Finale – but make sure you visit Santa first.

An Edinburgh Christmas Carol
Royal Lyceum Theatre, Edinburgh. 28 Nov 19-4 Jan 20, times vary
Tony Cownie brings Charles Dickens’ Christmas classic, A Christmas Carol, to the city of the story’s supposed creation in this stage adaptation. Rumour has it the character of Scrooge and the subsequent tale was created when Dickens was on a visit to Edinburgh and came across the tombstone of Ebenezer Scroggie in a kirkyard. Not just Harry Potter then. Image: Laurence Winram 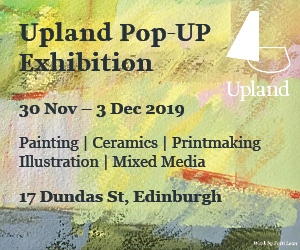 Pianodrome Resonator Festival
Leith Theatre, Edinburgh. 4-8 Dec
To conclude its residency at Leith Theatre, a five-day festival will take place at the Pianodrome featuring an array of events in collaboration with local artists and promoters. The festival will begin with Golden Hour, an evening of music and spoken word, and conclude with a closing concert headlined by Tinderbox Orchestra, with support from Hailey Beavis. Image: Chris Scott

Creative Floor Open Studios
CodeBase, Edinburgh. 5 Dec, 5.30pm
Meet and view work by some of the creatives working out of Edinburgh's CodeBase at Creative Edinburgh's Open Studios event. Studios open on the night include those belonging to architect Akiko Kobayashi, design consultant company K_N Design Studio, designer Martin Baillie and Local Heroes, whose column you may recognise from the pages of The Skinny. Image: Clark James Digital

SWG3 presents Seth Troxler B2B Optimo
SWG3, Glasgow. 30 Nov, 10pm
One of Chicago’s finest goes toe-to-toe with one of Scotland’s finest as Seth Troxler and Optimo go B2B all night on pay day weekend, which (as mentioned earlier) is also the final pay day before Christmas. Troxler is immediately at a disadvantage being just one person as opposed to Optimo’s two so he’ll have to bring his A-game if he wants to come out on top. Image: Brian Park