Ahead of the festive break, we run through the best events happening across Scotland over the holidays, from Christmas parties to Hogmanay and a few things to kick off 2020 with

We're going to bypass Christmas very quickly and kick off this week with the real fun ahead: Hogmanay! There are plenty of options up and down the country but we've picked a few highlights to help you narrow it down.

Being outside can be a bit of a ‘mare this time of year, especially when it’s Baltic and pissing down with rain but Mark Ronson is a pretty good booking for this year's Hogmanay in the Gardens. His latest album, Late Night Feelings, is a pop epic with big name features galore, so hopefully he’ll bring a few special guests to join him. And afterwards, you can keep the party going until 5am at SSL XL’s party at The Bongo Club.

In Glasgow, Flying Duck regulars A Cut Above throw their first ever Hogmanay party, showcasing the best of Scotland’s experimental and electronic music scene. Pleasure Pool, Double Discone, Kleft and DJ Scotia are all lined up to perform, as well as many more. Or if you're after a more traditional club affair, La Cheetah Club's NYE party sees two of their 2019 residents, Shanti Celeste and Objekt, go B2B, alongside sets from Peach and La Cheetah residents.

Green Door Christmas Party
The Flying Duck, Glasgow. 20 Dec, 7.30pm
Back to this weekend first though. Glasgow's Green Door Studio are throwing a Christmas party at The Flying Duck, with a line-up of local talent performing live on the night. WomenSaid, Molly Linen, Double Discone, Grim Lusk and Pleasure Pool (pictured) are among those announced to perform so far, with more still to be added.

Neu Reekie!'s Fairytale of Leith
Leith St Andrew's Church, Edinburgh. 20 Dec, 7pm
Neu! Reekie! celebrate their ninth birthday with a selection of old and new friends just ahead of Christmas. As always, the event will be a multi-arts affair, with musical guests including Joseph Malik and the Out of Ordinary Collective and Callum Easter, as well as multi-award-winning writer Jackie Kay (pictured) and poet Victoria McNulty. Image: Kat Gollock

ADVERTISEMENT | Christmas at the Botanics
Royal Botanic Garden, Edinburgh. Until 29 Dec
There's something for everyone in the new magical, botanical, illuminated trail at the world famous Royal Botanic Garden. You'll find all new installations – a Laser Garden where dancing lines of light play amongst the branches, or the shimmering waterside reflections of the Festive Flotilla. The popular, towering Tunnel of Light and the Scented Fire Garden return. The trail finishes with the spectacular Inverleith House Festival Finale and a visit to Santa and the gift shop!

Loud Poets: Bah Humbug!
Scottish Storytelling Centre, Edinburgh. 20 Dec, 7.25pm
If you're after a more literary Christmas affair, there are options for that too! In Edinburgh, literary giants Loud Poets are bringing four spoken word artists, musical acts and a poetry film to the Scottish Storytelling Centre. UNESCO artist-in-residence at the University of Glasgow Tawona Sithole, Edinburgh-born David Macpherson, poet Gray Crosbie and musician Jack Hinks all feature on the line-up.

Sonnet Youth
The Old Hairdressers, Glasgow. 20 Dec, 7.30pm
Over in Glasgow, Kevin P. Gilday and Cat Hepburn host a festive edition of Sonnet Youth. The Black Flamingo author Dean Atta headlines, alongside Kirsty Logan and Jamie Thrasivoulou, while Heir of the Cursed (pictured) will provide the music and Susan Riddell will provide the laughs. The party will continue into the night with tunes supplied by Dixon Avenue Basement Jams' Dan Monox. Image: Euan Robertson

Joesef
SWG3, Glasgow. 23 Dec, 7pm
Fast becoming Scotland's brightest talent, Joesef was recently included on the BBC Sound of 2020 longlist, following his single Loverboy getting a lot of airplay on Radio 1. His debut EP, Play Me Something Nice, is a wonderful jazz-tinged collection of songs showcasing Joesef's soulful voice and knack for melody. Support comes from Fauves and Cara Rose. Image: Nathan Dunphy 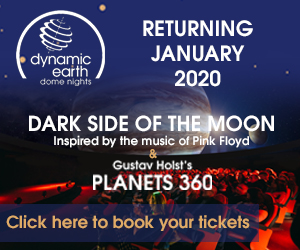 Message from the Skies: Shorelines
Various venues, Edinburgh. 1-25 Jan
Charlotte Runcie, Irvine Welsh and Kayus Bankole (pictured) are among those projecting their writing on landmarks around Edinburgh this month. The collection of letters to Scotland will be visible every night in January, between 5-10pm, at various locations in the city. The projection locations are due to be announced this month, so keep an eye out and plan your route appropriately. Image: Cameron Brisbane

Cage-a-rama
CCA, Glasgow. 3-5 Jan, times & prices vary
Matchbox Cinema’s annual Nic Cage celebration is back, and bigger than ever. This year, Cage-a-rama will close with the UK premiere of Cage’s latest film, Primal, before embarking on a UK-wide tour. The Cage-a-rama: Uncaged tour will take the festival to London’s Genesis Cinema on 9 January and Bristol Improv Theatre on 11 January. Image: Matchbox Cineclub