Edinburgh's Radical Book Fair returns with a jumbo long weekend packed with talks and bookish treats. Elsewhere, Great Western takes over Glasgow for a day, and a new exhibition opens at Fruitmarket.

It has been, to put it mildly, a terrible time, but Lighthouse Books in Edinburgh are doing their best to set the world somewhat to rights with the return of Edinburgh's Radical Book Fair. Running from now until this Sunday at the Assembly Roxy, the long weekend features talks, workshops, and the entirety of Assembly Roxy heaving with books, all revolving around the theme “Futures Worth Fighting For”.

Finding paths of optimism and activism in topics as diverse as dismantling the hostile environment and fighting fast fashion, the programme features names big and small: celebrate small local presses with the launch of new Inklings books by Arusha Qureshi and The Skinny's own Katie Goh (complete with DJ set) or reimagine what justice might look like with a panel on abolition.

Each event is ticketed, with a number of free tickets available to keep the event as accessible as possible. Check out the full programme here and get booking.

Howardena Pindell: A New Language
Fruitmarket, Edinburgh, 13 Nov-2 May
A New Language takes its cue from artist and activist Howardena Pindell’s work into institutionalised whiteness, disenfranchisement, and the possibility of radical empowerment. Featuring her large-scale abstract paintings, as well as intricate text-based collages, this collection is a stirring call to action. Image: Courtesy of the artist and Garth Greenan Gallery.

Great Western
Various venues, Glasgow. 13 Nov
The wonderfully eclectic Great Western is back in Glasgow for its second year, this time bringing along the newly minted Great Eastern for Edinburgh music lovers two weeks after. Great Western kicks off the action this Saturday with dozens of incredible acts lined up over one day, with music from the likes of Anna Meredith, Pillow Queens and TAAHLIAH on its numerous stages. Image: Kate Bones.

ADVERTISEMENT | Howardena Pindell: A New Language
Fruitmarket, Edinburgh, 13 Nov-2 May
This exhibition is a celebration of the art and activism of American artist Howardena Pindell who has been a force in the artworld since the 1970s. She makes beguiling and compelling paintings, works on paper and videos; and asks urgent questions about what we are and aren’t doing about racial and social justice.

Play Poland Film Festival
Various venues + online, Edinburgh + Glasgow. 11-25 Nov
A celebration of Polish cinema in all its intricate, groundbreaking glory, Play Poland is returning from a five year hiatus with a dynamic and unmissable programme, split across its online platform and screenings in the Filmhouse and Glasgow Film Theatre. Image: Robert Palka.

ADVERTISEMENT | Glasgow Christmas Market
St Enoch Square, Glasgow, 21 Nov-23 Dec
The Glasgow Christmas Market offers crepes from France, Dutch pancakes, Belgian chocolates, an exotic selection of ostrich, wild boar and crocodile burgers, giant bratwurst from the iconic Schwenkegrill and sweets from Italy. Some new tastes to whet the appetite this year include Noodles, Pad Thai, Salt and Chilli Chicken & HellFire Wings. Visitors can also treat themselves to the well-known Hug in a Mug of Gluhwein, hot chocolate piled high with marshmallows and cream or a beer from the popular Ranch Bar.

Ballet Black
Festival Theatre, Edinburgh, 18 Nov, 7:30pm
Making seismic changes to the landscape of classical ballet is Ballet Black – a company dedicated to dancers of Black and Asian descent. Their latest offering is a thrilling programme of new and original works, including ballet, poetry and music by Royal Ballet choreographer Will Tuckett. Image: Bill Cooper. 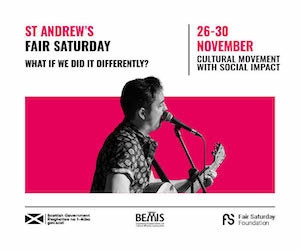 The Tolbooth music and arts venue in Stirling are set to release an EP titled ‘RESURGENCE’, a bold collaboration of six musicians, co-produced with Roddy Woomble. They have been working with six musicians to produce a new EP thanks to funding from Creative Scotland. Musicians of varying styles and at different stages of their musical journeys were invited to collaborate in pairs.

Together they have created a 6 track E.P, which will be released digitally on Friday 12th November and is available to download from all major platforms, with proceeds going to local charity Start-up Stirling.

Eats Everything 10th Anniversary Tour
Room 2, Glasgow. 18 Nov, 11pm
Legendary Bristol-based producer and DJ Eats Everything descends upon Room 2 to celebrate ten years since his iconic debut on the dance music scene. Having since become one of the most important names in British electronic music, this is a celebration not to be missed.