The best film festivals introduce you to cinema you might otherwise never see, and that’s just what Iberodocs - Scotland’s festival dedicated to Ibero-American documentaries - does. Taking place from 6-10 April with in-person screenings in both Edinburgh and Glasgow before moving online for the 11-17 April (available all across the UK!), this year's programme revolves around themes of territory, belonging and migration and the ability of cinema to move across borders.

Kicking off the programme is the Scottish premiere of the Gaudí award-winning The Odd-Job Men, a comedy which follows a young Moroccan plumber navigating an eccentric line-up of clientele. Also on is Seville-based filmmaker Rocío Huertas’ La Alameda 2018, screening at both Banshee Labyrinth in Edinburgh and Glasgow's CCA, with Huertas hosting a free immersive animation workshop in Edinburgh ahead of their screening.

Tickets can be bought through the website: browse the full programme here.

Our three-day Festival is packed with workshops, panels and screenings, celebrating young filmmakers, exploring routes into the industry, showcasing Film Access work, and providing opportunities to network with peers and industry professionals. With captioned film screenings, workshops, panels and filmmaker Q&As, this Festival is for all emerging filmmakers and film enthusiasts!

Bakar
St Luke’s, Glasgow. 7 Apr, 7pm
An intoxicating blend of punk, indie, and rap, Camden-born Bakar’s music has been compared to the likes of Bloc Party and is a breath of fresh, incisive air in the UK’s often maddeningly uniform indie scene. Having been releasing music for five years, this year marks the release of his remarkable, genre-defying debut album. Image: Bakar.

Club Sylkie: Diessa
Stereo, Glasgow. 1 Apr, 11pm
Club Sylkie, Scotland's bass-y club night for queer people and their pals, heads to Stereo for their first ever Glasgow party, featuring Diessa, one of the UK's most exciting DJs and producers, as well as an immersive audio visual installation from filmmaker Cal McCormack. Image: Stereo.

PREFAB77: A Slice of Life
SWG3, Glasgow. until 22 Apr
A punchy, allegorical series of work by acclaimed Newcastle-based artist PREFAB77 - aka Peter Manning - these are portraits unlike any you’ve seen before: vivid, textural mix of acrylic, spray paint and varnish, and deliciously anti-establishment. Image: PREFAB77/SWG3. 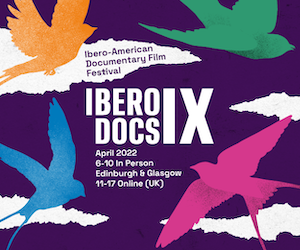 Wonder Festival
Royal Lyceum Theatre, Edinburgh. Until 9 Apr
A dynamic new theatre festival dedicated to works-in-progress, Wonder Festival is an eye-opening and invigorating glimpse at the creativity and vitality behind theatre-making. Highlights include Keli from LAU folk artist Martin Green, and an upcoming adaptation of Ali Smith's How To Be Both. Image: Sandy Butler.