Manchester International Festival kicks off, while North Bar celebrates its 20th birthday and Moonlight Flicks take over Chester's Roman Gardens. Go enjoy all that, then go grab yourself a copy of the FINAL EVER Skinny North!

Each week The Skinny team hand-pick a selection of the best events from the North's cultural calendar to provide you with this 'ere top ten guide to the most exciting goings-on for the week ahead. From gigs, plays and exhibitions to spoken word, pop-up foodie events and one-off film screenings, we give you the insider's guide to things to do in Liverpool, Manchester and Leeds every Thursday morning. 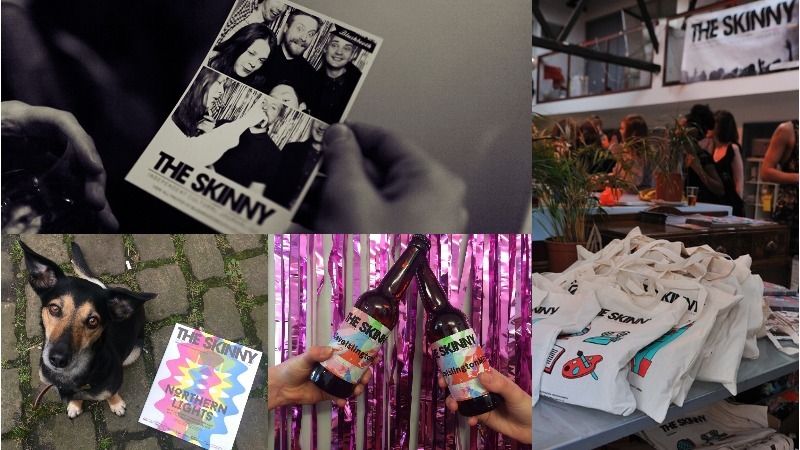 Tomorrow we go to print with the very last issue of The Skinny North. Aye, the end of an era – for us, for you, for the North. But for our final trick, we've ensured that it's a fucking corker, mate! We've enlisted the help of local favourites, friends of the mag and all-round good eggs to help us not only look back on what's been an incredible past four years here in the North, but to also look to what could be a really promising future for the region.

You'll be able to grab yourself a copy of this historic issue from Tuesday 4 July, when it'll be slung into the cafes, bars, theatres, galleries, libraries, shops and cinemas of Manchester, Liverpool and Leeds for one last time.

You'll still find us online and in your inbox for a few more weeks, but in the meantime we wanna say thanks reader, it's been a blast!

Peaness confirmed for The Final Fling!

We're pleased as punch to say that Chester indie-pop trio Peaness will be joining us for our closing party on Friday 14 July at Islington Mill. We've been huge fans of theirs for a while – check out our review of Are You Sure?, their new five-track collection that's a "bugle call for creative free thinking and empowerment", and cllick 'Attending' on the Facebook event for more updates on the lineup over the next couple of weeks.

John McGrath on Manchester International Festival 2017: “A festival for everyone”

The world's first festival of exclusively new commissions, MIF returns for 2017 under the leadership of new artistic director John McGrath, who tells us about a programme of enormous ambition with firm local roots. Photo: Monika Lukasik

2017's a good year because it's a MIF year! Opening with What Is the City but the People?, a promenade event in Piccadilly Gardens in which individuals from across Manchester will come together in a display of diversity, other highlights include the Mary Anne Hobbs-curated live series Dark Matter and Ceremony by Turner Prize-nominated artist Phil Collins. Find out what else you can look forward to here, before pitching up in Albert Square to soak up those lovely sunny MIF vibes that we've missed. Photo: Donald Christie

Britain's first craft beer bar celebrates two decades in the game this weekend, going all out in the manner that any self-respecting 20-year-old would: with cake, shiny foil balloons, DJs, tequila, a free photo booth and party bags with a 20th anniversary zine, t-shirts and other goodies. The bash will also launch their 20th birthday beer, as well as #NB20, North Bar’s £20,000 fundraiser for St. Gemma's Hospice.

The good folk at The Pilcrow get the sunny shenanigans underway with Pilcrow's Summer Beer Thing, a three-day celebration of the best beers that the North (and further afield) has to offer that will also close Manchester Beer Week. With 70 beers pouring at any one session (and a total of 200 lined up for the festival's duration), the beers will be grouped together in style categories, with bars focused on pouring the best pale ales, IPAs, fruit, sour beers and more. Find out which breweries you'll see there in our preview here.

Taking over HOME, the Royal Exchange Theatre, Contact, The Lowry and the Martin Harris Centre for Music and Drama, international festival of new theatre Flare Festival presents work from the UK and across Europe from companies including Dead Pig, Tin Can People and Nineties Productions. Browse what's on at flarefestival.com.