When you realise that people do not always get what they deserve, what do you do? Arinzé Kene’s good dog offers a poignant look at one young person's struggles against the forces of society

When you realise that people – no matter how good or bad their actions may be – don't always get their comeuppance, what do you do? This question lies at the heart of Arinzé Kene’s good dog, directed by Natalie Ibu, which follows an unnamed child (Kwaku Mills) growing up in a working-class, multi-cultural neighbourhood in noughties Britain. The well-behaved boy’s dream is a new bicycle, but when he realises his mum’s promise is impossible to fulfil due to their circumstances he takes his future into his own hands. The result is a poignant snapshot of youth’s struggles against forces beyond his society’s control.

The charisma and honesty in Mills’ performance makes the protagonist instantly engaging and sympathetic; his easy, cheeky rapport wins the audience easily before turning into a more harrowing confessional in the second act. Supporting Mills’ compelling storytelling is a minimalist, multi-level set and immersive sound and lighting design by Amelia Jane Hankin, Helen Skiera and Zoe Spurr, respectively, which fluidly captures homes, streets, and stations. 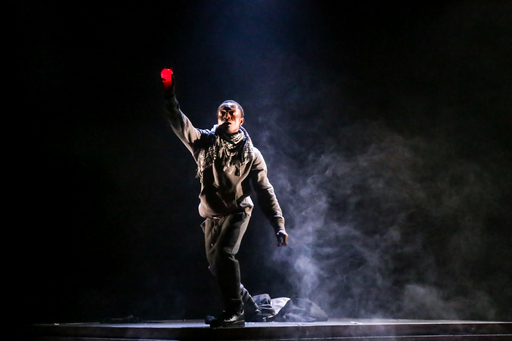 The other characters are seen only through the boy’s eyes; while his opinions and perceptions of his neighbours and classmates are clearly conveyed through interactions, they exist only to serve his story. This isn't necessarily negative – the boy’s story is the focus and his interactions serve to further his changing outlook on life – although it is unfortunate that the largest female character is ‘fridged’ not once but twice. Corner shop owner ‘Gandhi’ (no one knows his real name) is given the most development as our protagonist observes how his exchanges with customers and a stray cat evolve over time. Additionally, the sharp observations about his unhappily married neighbours and fatherless classmate through the boy’s straightforward recounts of their actions adds depth.

The run-time may be the show’s one detriment: while a two and a half-hour one-man show is a feat of memory and dynamism (Mills excels at both) some anecdotes could have been culled for a tighter focus. That said, the interweaving interactions and meandering relationships give the world breathing room, evoking a strong sense of time and place, and build to an explosive finale.

When the community inevitably faces its largest collective threat, the groundwork pays off as all peoples and places that have touched the boy’s life – including a small, put-upon dog – respond with believable, appropriate fury. good dog is ultimately nihilistic, but the dignity with which it imbues the boy and his community captures the ultimate necessity of their collective acts of survival.