Vanishing Point and The New International on The Dark Carnival

Ahead of the premiere of new co-production The Dark Carnival, Vanishing Point’s Matthew Lenton and A New International’s Biff Smith discuss their so-called "hare-brained scheme", and explain why their new show is not a musical

Flashes of inspiration can come to anyone from anywhere. For director Matthew Lenton, the founder and Artistic Director of Vanishing Point, it all began when an image suddenly appeared in his mind’s eye. “It was pure, like someone had just slipped a little slide into my brain.” We're talking during a break in rehearsals for The Dark Carnival, a new production created and performed with Glasgow band A New International, and co-produced with the Citizens Theatre in association with the Dundee Rep Ensemble.

“I saw this image of the dead underneath in their coffins and the grass above and the gravestones. The blue sky is shining, but a world in which the dead... underneath the ground had their own little society," Lenton explains. "It probably came from years of visiting a graveyard after the loss of someone and I didn’t decide to make a show about it, but all the experiences of that place just probably got into my brain a little bit.”

For Lenton, the image just wasn’t enough, it needed music too. Specifically, it needed a live band. And while he’d initially thought of another musician to collaborate with, and had even approached them about the project, it was on a drive to the Cairngorms one day when he heard a track by Biff Smith and A New International on the radio that it all started to come together. “I had initially thought about Tom Waits," says Lenton. "And a channel of communication had opened up between Tom Waits and me. But then I was driving up north to visit my daughter, and heard one of Biff’s songs – one of New International’s songs – on the radio as I was driving up to the Cairngorms, and the song, together with the fantastic scenic view that you get up there, just tripped my imagination.

“I loved the sound of the music, and I loved the visual images, the natural landscape that happened to be going with it," he continues. "[I] felt that they had exactly the right feeling and atmosphere that I wanted, that I loved, the kind of music where I could just feel it in my blood, then I sent Biff an email.”

For A New International’s frontman Biff Smith, Lenton’s message was an unexpected but very welcome invitation. “I received an email [that] seemed out of the blue to me, asking me if I’d ever written for theatre? Would I be interested writing for theatre? And it was a no-brainer: 'Yes please!'”

That email led to a meeting between the two men at the Griffin Pub in Glasgow on a cold January night where Lenton told Smith all about his idea for a show set in a cemetery, while “trying to make it sound like it wasn’t completely miserable, which it’s not." And, as Smith explains, it worked: “Matt described his hare-brained scheme to me and I bought into it!”

This “hare-brained scheme" would go on to become The Dark Carnival, a music and theatre spectacle which opens at Tramway in Glasgow later this month. It boasts 16 performers and musicians, using song and spoken word to tell the story of the recently deceased arriving in the afterlife. Except that, once there, they realise that death is not the end and form a community where every night is a party.

Inspired by the brief, Smith sent in song after song. “I found that a lot easier in some ways than something from my own experience,” says Smith of realising Lenton’s proposal. “The idea of having a brief almost set me free in a contradictory way, I found it liberating and an awful lot of fun.”

Smith's prolific songwriting in turn inspired Lenton as he was writing the text of the piece. “I couldn’t get them out of my head," admits Lenton, "because each one is so distinctive and catchy. I suppose too as I started to write the text, they started to, in an organic, subconscious sort of a way, infest – if that’s the right word – my mind and influence how the show was going.”

While the ideas flowed freely, The Dark Carnival posed a few problems when it came to categorising the show. It uses a mix of music, theatre and poetry, and its story of life after death, or simply life despite death, takes place in an illogical and abstract world that most musical theatre-type shows don’t dare to visit. So, just what is The Dark Carnival, exactly?

“I’ve sort of described it to people as a musical tragi-comedy set in a cemetery," Lenton explains. "It’s not a musical like a theatre musical, but it’s not a gig because it’s got a story in it.” 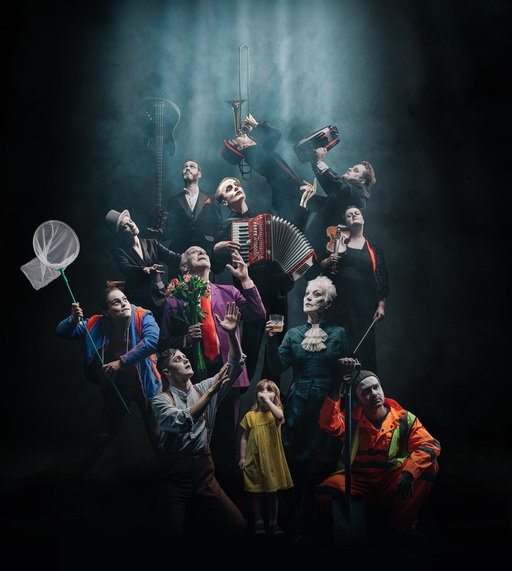 But while the show isn’t a musical, the inescapable spectre of famous musicals did make an impact on Smith when he was writing the songs. “I love The Rocky Horror Picture Show and Cabaret, and even the idea in Cabaret that some exciting stuff is happening where oppressors have overlooked it. You might just have this small window of opportunity before the funding is yanked, for example; we have a window of opportunity right now to make something.

“As far as musical influences go, even though it’s not a musical theatre show, there’s things in musical theatre that I’ve loved and I’ve tapped into that in a certain degree in the writing of this piece," Smith continues. "I love villains, always have. I always thought the bad guys and bad women had the sexiest outfits, the best tunes... the devil always had the best tunes, as we know.”

But the most important thing for Smith, and also for Lenton, is how artists use darker themes to create work. “Matt mentioned Tom Waits earlier," Smith says. "He’s a big hero of mine. Anyone that uses darkness and doesn’t ignore darkness, if it’s all just happy clappy, I think it’s dishonest. Twee.”

The danger of making a play about death is perhaps to make a show full of well-known clichés. But, as Lenton points out, our ideas of death are informed by stereotype, and so the duo have decided to not just include platitudes about dying and the afterlife, but actively celebrate them too. “It’s also celebrating cliché a little bit," Lenton says. "There’s heaven, there’s a sort of hell, there’s the living, there’s angels sitting on fluffy cotton clouds. So it’s kind of embracing that idea of the kind of sort of slightly, stereotypical notions about the afterlife, and hopefully using those stereotypes in a kind of fun, playful and maybe a little bit of a provocative way.”

As the show embraces themes of death, the afterlife, and the darkness that both Smith and Lenton appreciate and use within their work, is it designed to be a Handbook for the Recently Deceased, or a celebration of living? They answer: “Both."

The Dark Carnival, Tramway, Glasgow, 19 Feb-2 Mar; Traverse Theatre, Edinburgh, 6-9 Mar; Dundee Rep, Dundee, 13-16 Mar
The Dark Carnival: Unplugged, an innovative, storytelling version of The Dark Carnival starring Biff Smith and Robert Jack, will premiere on the Isle of Eigg on 13 May, then tour around Scotland
A New International will release an album of the songs from The Dark Carnival in Spring 2019