The Skinny chats to Lauren Hendry about Tetra-Decathlon, her new show about training for the world championships of a 14-event athletics competition and creating a piece of theatre from the experience

Over the last few years, Lauren Hendry’s life has been dominated by numbers; 800m, 1500m, 3000m. Having never run on a racetrack until 2016, her new solo show, directed by double Fringe First winner Jenna Watt, Tetra-Decathlon chronicles her training for, and results of, the 14-event track and field competition of the same name in 2017.

Hendry’s journey from lapsed acrobat to serious amateur athlete makes for compelling reading for someone who is more used to watching performers talk about anything else but numbers. “You’ve got trapped down the rabbit hole,” she laughs when we tell her about reading her blog. “My life is numbers!”

Despite her background in acrobatics, Hendry had no experience in athletics, and had never trained for an event like the tetradecathlon, but a chance viewing of the Beijing World Athletics Championships in 2015 changed everything.

“It was when Jessica Ennis-Hill had her comeback,” begins Hendry, “and she won the World Championships, and I was just totally inspired by that. But I couldn’t remember what the events were, so I started to Google them and in doing so, stumbled across tetradecathlon, which is so niche that their World Championships only had 13 competitors.” 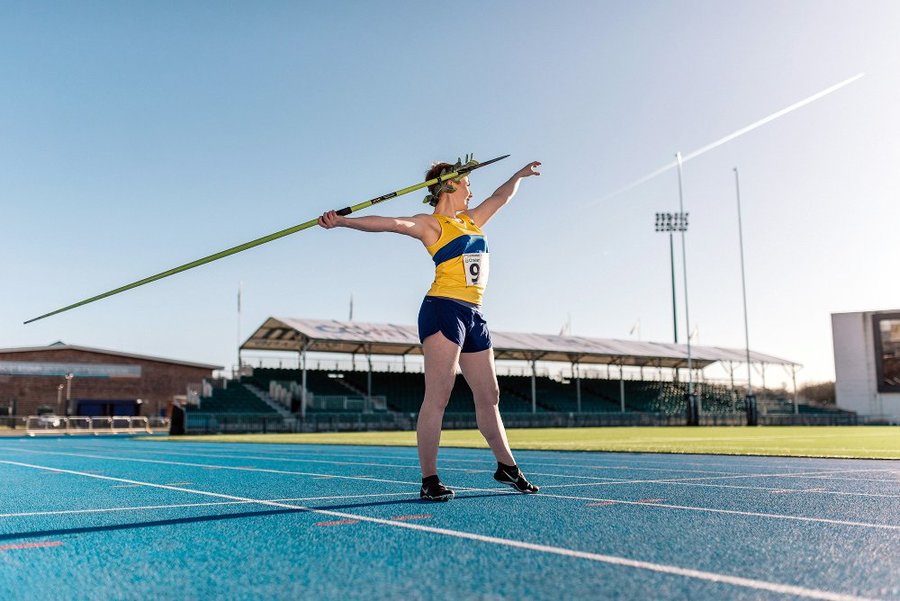 Emboldened by the idea of being 14th in the world at the World Championship, she joined a local athletics club, and started training on 1 January 2016. Hendry was aware that her challenge of competing from what she calls a “sitting start” was extreme from the very beginning, calling it “14 Kinds of Daft”. She knew it would be difficult, but she was determined to finish it and create a show about it.

“I’ve always been interested in theatre that’s based on true stories,” explains Hendry. “I always thought all the way through that because there was a place to start that’s what I’m interested in, I can document everything throughout the whole process, rather than getting to the end of it and trying to think back. It was kind of the opportunity to do that, to make a piece of theatre on a true-life story, but as it happens, rather than retrospectively.”

“I can’t really separate them, because the training took a lot more effort,” Hendry says. “For me, competing, it feels like performing; it has the same build up to a set moment where you have to perform and you are judged by other people, or by the clock.

“Without that moment, you can’t really see how the training’s been going, because it always feels awful, it always feels really hard," she explains. "You can’t have the pay-off without it."

While she remains tight-lipped about the content of the show, or her results at the World Championships (“I was pleased with my results,” she says) Hendry hopes that Tetra-Decathlon will be an inspiring show. Not just for its content, but also its message of going for a seemingly-impossible goal and achieving something you never thought you could ever do, until you put your mind and your body into it.

“Imagine if you’re a professional athlete: how hard do you have to work to be 15th in the world? People work all of their lives to be Top 20, and I just felt like I’d cheated it, but then, actually, doing the training, it didn’t actually feel like cheating!”

Tetra-Decathlon will be presented at Festival 2018 as part of Glasgow 2018, and plays venues around Scotland, 27 Jul-26 Aug