Dating apps are tricky to navigate for everyone, but they're even trickier if you don't fit big tech's gender mould. Here one writer reflects on why dating apps need to become more inclusive to transgender and non-binary users

Content warning: this article includes discussions of transphobia and references to suicide.

If one more cisgender person tells me how good Hinge is, I’m going to scream.

They mean well, of course. They’ve had positive experiences and they want to share them with me, the nearest single person in their vicinity. But their experiences of Hinge and my experience of Hinge are very different, and there’s nothing I can do about that.

Dating apps can be unpleasant even under the best conditions. When you’re basically online shopping for people, there’s always the possibility of a bad fit. Like most things, though, it’s even more difficult when you’re transgender. People say ignorant things – and they say deliberately offensive things – and that’s before we get to the problems with the apps themselves.

Since the start of the pandemic, more people are using Tinder, Hinge and Bumble than ever before; Tinder alone saw a record three billion swipes on a single day in March last year. But are the experiences of trans users getting any better? Depressingly, no, not really.

Unsurprisingly, Grindr is the worst offender. Requests for nudes and generally degrading comments are par for the course there, but every now and then something more sinister emerges. I’ve been using the platform for long enough that I can usually tell who’s going to turn out to be a transphobe from just the way they say hello, but sometimes you feel like you should give them the benefit of the doubt. This is always a mistake.

One user I engaged with despite my initial misgivings couldn’t understand why I, a queer trans man, would say on my profile that I wasn’t interested in straight guys.

“Surely a gay guy wouldn’t want that?” he asked, somehow managing to not only put every gay man into one box, but also forget that bisexual, pansexual and queer men exist.

“Well, some people have more expansive definitions of what a man is than you,” I responded.

This was about the point when he started to verbally abuse me, in a way that was so exaggeratedly transphobic that I actually started to laugh. It isn’t funny really, but sometimes it also is. His parting shot was to describe what he saw as the manner and location of my eventual suicide – the way we all go, according to him.

The irony is that this guy, knowing I was trans, had already said he wanted to sleep with me. The Venn diagram between these men and the kind of men who ask girls for nudes, then call them ugly skanks when they refuse, is a circle. 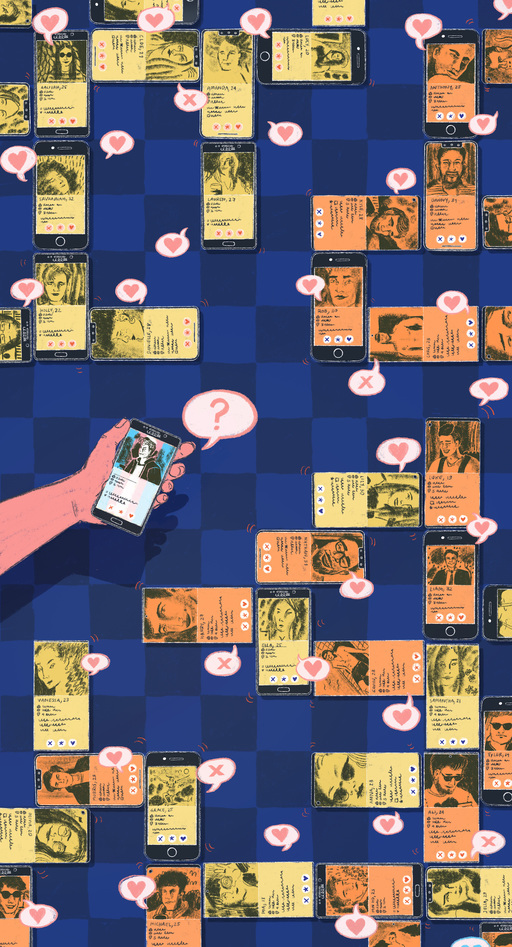 It’s not just bigotry that’s the issue. For many non-binary users, or anyone else whose gender doesn’t fit neatly into 'man’ or ‘woman’, some of the problems are structural. When Tinder introduced more gender identity and sexuality options in 2019, it seemed like a step in the right direction. But it turns out these options are a set of stairs leading nowhere. While both Tinder and Hinge now allow users to select their gender from a wider range including non-binary and genderqueer, once those have been entered you’re presented with another, much more restrictive choice.

“Show me to people looking for…” says the screen, and then "men" or "women." Are you a boy they/them or a girl they/them?

Andrew, a non-binary person who uses dating apps, has experienced this on several platforms. “As someone who identifies as ‘both’ genders, it’s a nightmare trying to work out what category to put yourself in,” they say. “You have to pick whether you want to be shown to people who are looking for men or women. So that’s a toss-up, trying to work out what group of people I’m trying to attract.”

Another non-binary user, Neve, tells me: “The thing that sucks the most about Tinder is that people are organised by gender rather than by sexuality. Even before I started identifying as non-binary, as a queer person I had a strong preference for dating queer people of my gender. I stopped dating straight people in the 2000s. And on Tinder you can’t filter out straight people.”

This was a common theme I found when speaking to other trans and non-binary people about their experiences: it’s difficult to meet other trans and non-binary users. OkCupid was once the leader of the pack for this, but in recent years it has started to slip, pivoting towards a more swipe-based design and away from browsable profiles. Then there’s the text-based personals app Lex, which caters exclusively to queer women and people of marginalised genders but can still feel closed-off to some transmasculine people. It can be disheartening as a masculine-identifying person to feel that the only place you’re welcome is one primarily made for women.

Depressingly, one of the better platforms for trans people looking to meet other trans people is Grindr, allowing you to filter by ‘tribe’ – but then we’re back to the bigots again. So what’s the solution? For many trans people, the ideal would be an app truly made for queer and trans people. Surely that’s not so much to ask?

In the meantime, though, the power to improve things lies with other users. There are already plenty of things to worry about when we’re swiping – what if, for example, your match really, really likes The Big Bang Theory for some reason? We shouldn’t have to worry about transphobic abuse as well.