Over lockdown, all our relationships have been thrown into question. One writer explores why it's the physical intimacy of friendships that she misses most of all

I haven’t touched another person in five months. I have been touched a few times – eight to be exact – in the same place in the crook of my elbow where the practice nurse takes my blood, but that is the extent of it. I am not alone in this. For those of us who live alone or have been shielding, the last few months have meant an utter absence of any form of physical intimacy. And by physical intimacy, I mean every kind.

As this strange year has unfolded, there has been a lot of discussion about what dating and sexual relationships will look like in our new pandemic world. Think pieces have been written, Twitter has become a maelstrom of sexual frustration and Hinge is pushing video chatting as the hot new date idea, a development so horrifying that I deleted the app with unprecedented alacrity.

The least said about the train wreck that is my dating life the better, but suffice it to say that several months of government-mandated celibacy did not constitute that vast a shift from the norm. Instead, the last few months have thrown into aching relief the absence of everyday physical connection that normally exists between my friends and me.

Close friendships between women and femmes have long been perpetuated in popular culture, but it wasn’t until the coronavirus pandemic that I realised quite how viscerally affectionate and borderless these friendships are: hands touching hair, falling asleep next to each other, swapping clothes and pinching food from plates without asking. They hold an intimacy that is usually only spoken about in a romantic context.

One friend and I would sit in our underwear smoking on her bed, bare legs overlapped, and without asking I would reach for her crumpled pyjama top on the floor and put it on for warmth. I would regularly crop another friend’s undercut, seating her between my legs as I ran her hair through my fingers. Another friend and I, on the same medication, supplement each other’s supplies if our prescriptions are a day late, literally permeating our organs with what the other has. My friends were – are – my body’s ecosystem. We are porous, entangled, made up of ourselves but also of each other. 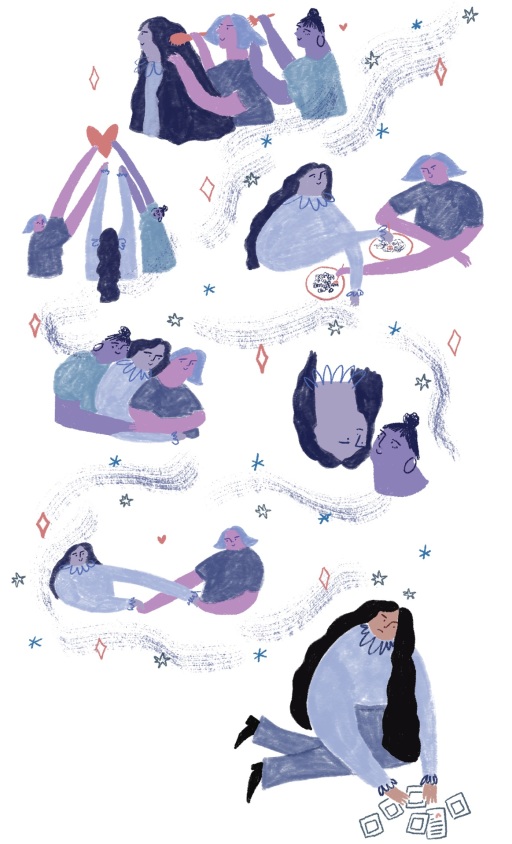 As central as these relationships are to my life, I nevertheless lack the proper vocabulary to describe them. They are friendships, but they are much deeper than that. They are physical, but they aren’t sexual. They are romantic, but they aren’t erotic. I’m reminded of Bathsheba Everdene from Thomas Hardy’s Far From the Madding Crowd lamenting: “it is difficult for a woman to define her feelings in language which is chiefly made by men to express theirs.” In a society predicated on patriarchal structures of marriage, heteronormativity and the nuclear family, there is no real language to articulate the complex nature of these relationships.

It manifests as an inadequacy of expression, but there is more to it than that. Fundamentally, it comes down to a failure of our society to imagine people, especially women and femmes, outside of the utilitarian relationships that the marriage market and dating industrial complex have to offer. As a single woman, I am told over and over again to focus on the platonic and familial relationships I have in my life. Yet how am I meant to be satisfied in these relationships when the world sees them as training wheels for the monogamous romantic relationship that I should eventually graduate into? How many times have I attended a wedding alone when all my friends with partners receive plus ones? As if I don’t have people in my life who I feel inseparable from, who I want to celebrate with, who anchor me among a sea of acquaintances.

If the coronavirus pandemic has taught us anything, it is the extent to which we are all profoundly interdependent on each other, with a wealth of networks, desires and relationships that reach far beyond romantic couplings. Once we emerge from this pandemic, we need to reprioritise our current relationship hierarchy, as well as radically reconceptualise how we understand intimacy outside of sexual relationships.

For women and femmes especially, who bear the brunt of having their bodies and sexuality constantly policed and commodified, intimacy and physicality need to be liberated from the narrow confines of the dating world. We need to value – and mourn the absence of – the romance and sensuality that exist in our platonic relationships. Because yes, sex is cool and all. But sometimes, you just want to hold your friend’s hand.