Why museums need to decolonise their collections

It's about time British and Scottish museums reckoned with their colonial histories. Here's why

“You have our soul,” said the governor of Easter Island, Tarita Alarcón Rapu, last November, as she pleaded with the British Museum to return Hoa Hakananai’a, a moai statue taken by the British in 1869. The British Museum’s refusal to return Hoa Hakananai’a is hardly a unique case; museums up and down the UK are bursting with artefacts and artwork with dubious acquisition histories. Their desire to cling on to the plunder of the British Empire reinforces the fact that the UK is still choosing to benefit from its colonial past.

Museums are not objective in the same way that history is not objective. History is told by the winners of battles, the conquerors of countries, the empires that subjugated masses of people. Similarly, museums get to choose their narratives. Exhibitions are carefully curated and objects are carefully chosen. When you walk through a museum you are walking through a micro-managed historical narrative, from the labels to the lighting to the gift shop to the artefacts behind glass.

Alice Procter noticed that she was being fed a very specific narrative at university. “I studied art history and I kept finding that I’d be in classes and no one would want to talk about colonialism, even though it was so obviously present,” she tells us. “No one really wanted to go there and I was surrounded by people who had never really spent any time thinking about imperialism and its legacies. So when we were going to museums and galleries, they just couldn’t see how present it was because they had been trained into this blindness towards it.”

In 2017, Procter launched Uncomfortable Art Tours as a way to go off the beaten track and look for narratives that cultural institutions are either hiding or ignoring. The tours, led by Procter, run at six sites in London: the National Gallery, National Portrait Gallery, British Museum, Victoria and Albert Museum, Tate Britain and the Queen’s House (National Maritime Museum). “I was very specific that I didn’t want to just do a ‘here’s all the stuff that was stolen’ tour,” she explains. “I wanted to talk about how people represent themselves and how that feeds into ideas of national identity and constructions of racialisation. When museums refuse to even engage in these kinds of conversations, they’re just reinforcing they’re part of an out of date colonial power structure.”

As well as Uncomfortable Art Tours, Procter has launched an initiative called ‘display it as you stole it’ to pressure museums to display work with complete transparency. “If you have objects with contested histories and you have objects with links to imperialism and colonial cruelties, then you need to be honest about that and talk about that,” explains Procter. She points to Hoa Hakananai’a at the British Museum as an example. “The gallery label for that doesn’t say anything about how the British got hold of it. All it says is it was donated to the museum by Queen Victoria. That’s not lying, but how did she get hold of it to donate it? I want to be able to make the transactions and timelines and movements of these objects a bit more visible.”

In Scotland, cultural initiatives similar to ‘display it like you stole it’ are going on. Pressure is mounting on the Scottish government and museums to address Scotland’s links to colonialism and slavery that have been ignored for too long. Graham Campbell, an SNP councillor in Glasgow, is part of a museum committee with the Coalition for Racial Equality and Rights that have been campaigning over the last decade for Scotland to have a museum dedicated to the country’s links to slavery, colonialism and empire. Like the British Museum, and many other museums and galleries in England, Scotland has its fair share of artefacts with violent histories.

“The museums in Glasgow are full of these artefacts; there are hundreds of spears from battles from Scottish soldiers who looted from the countries they were in because Scotland has such a military history,” explains Campbell. “And people don’t know what to do with them. Part of the problem is how do you display this without causing offense because, the fact is, somebody’s died and had stuff taken from them. The artefacts [in museums] are taken out of context and therefore the cultural interpretation of them is obviously outside the context of the cultures they’ve come from. 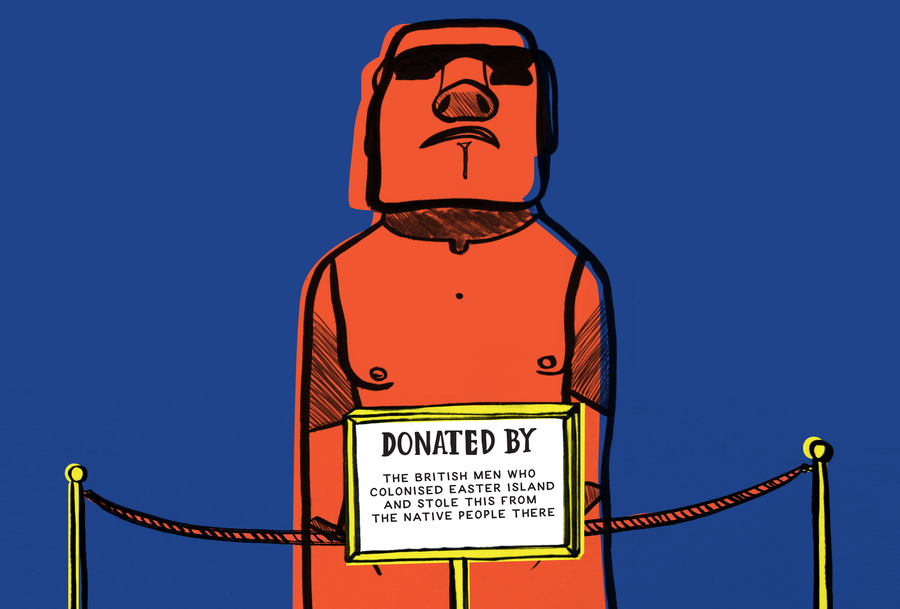 “Obviously, museums should be giving stuff back,” he continues. “But really it’s about the stories. If having the artefacts is any use, you’ve got to have a story that tells the truth about where it came from.” Campbell points to public statues and the geography of areas like the Merchant City in Glasgow as another example of where this transparency is needed. “I think we should tell the truth and the story of the artefacts on the street. So if you have a street sign that says Oswald Street, you should have a sign saying that Oswald was a slave owner.”

Glasgow, a city that financially reaped the benefits of slavery and colonialism, is slowly beginning to come to terms with its troubled past. In September, the University of Glasgow announced a programme of “reparative justice” after a report found that significant donations made to the university had direct links to slavery. “There were 75 big donations that went into the Gilbert Scott building,” explains Campbell. “Of those large donations, 24 of them were directly linked to slavery. The value of them in today’s money is about 200 million pounds. And that’s just the big donations. The scholarships set up by the families that donated are still helping students, so this money is still working through the system. This isn’t an issue of the past.”

So, how does Scotland, generally, come to terms with its past? Campbell emphasises the need for education reform. “A lot of people have said that they weren’t taught this in school and asked 'why don’t we have it in the curriculum?' So clearly that’s a national task for the Scottish government, to put the proper history of Scotland into the curriculum. It also requires history teachers to be correctly trained in how to raise these difficult subjects of colonialism, slavery and migration, and talk about them with children.

“We’ve raised the issue of what reparative justice means,” says Campbell. “Glasgow University has been dealing with that and Edinburgh University has been grappling with how to deal with it. Reparation means you’ve got to repair the relationship; you’ve got to make amends. Sometimes that means financial, sometimes that means restoring relationships between institutions. It might mean twinning universities or civic organisations like we do with Flag Up Scotland Jamaica.”

A national museum, like Liverpool’s Museum of Slavery, is a necessary step for Scotland to address its history of slavery and colonialism. Campbell and the CRER are pushing for the Gallery of Modern Art to become a museum of slavery as the building was once William Cunninghame’s mansion. Cunninghame, Campbell explains, was “a major Jamaican plantation owner and slave driving mass murderer who laid out the streets around that area. Glasgow wouldn’t be the shape it is without that blood money.”

While museums dedicated to ugly histories are required, pre-existing museums need to decolonise. “We’ve seen museums do the surface level diversity thing where they diversify their staff rooms, but they’re not actually diversifying their structures and they’re certainly not decolonising their structures,” says Procter. “And museums need to start giving stuff back. Until they start doing that, we’re not going to see any changes. There are museums in the UK that haven’t even repatriated human remains in their collections and that’s atrocious. There’s no excuse for that.”

Campbell agrees: “The process has to be recognition and awareness. We’re in the acknowledgement and awareness phase of the process, we then need to create institutions that respond to that acknowledgment and awareness. I don’t want a meaningless gesture. Apologies won’t change anything. What will change things is changing structures, institutions, and doing something proper for all those people who suffered and built the stuff that we’re enjoying now.”