During the Black Lives Matter protests last summer, Tobe Amamize was inspired to petition the Scottish government to incorporate Black, Asian and minority ethnic history in school curriculums. Here's why

Like so many people, when I saw the Black Lives Matter movement resurge in 2020 I was moved but, as time went on, I saw the vicious cycle of history repeat itself: an incident occurs, we protest and then we move on, like nothing happened and the world remains unchanged. The protests were commendable but, when a protest ends, everything goes back to normal and everyone goes back to their lives, forgetting why we were on the streets. We've seen this happen countless times and, however veracious our chants, last summer it looked like the same was going to happen. But this time I couldn't stand back and just let the cycle repeat itself.

This is why in June of last year, I started a parliamentary campaign calling for the Compulsory education of Black, Asian, and minority ethnic history in Scottish schools. It calls on the Scottish Government to embed underrepresented Black, Asian and minority ethnic history into the Scottish educational curriculum; the parts of history that go ignored, consciously and unconsciously. To be honest, I was anxious to see if it would gain any traction, scared that nobody would care and nobody would want to listen. Gladly, I was wrong. Far from it actually, as soon over 3000 people had signed the petition. Over 3000 people cared. Over 3000 people wanted to listen. But the question still looms at the back of my mind: for how long?

This may just be another petition, one of many that circulated in the summer calling for racial equality, but, in the bigger picture, this is a stepping stone: this could be the beginning of the end of racism. Or at least I hope so. History tells us what has gone before us. In the case of Black history, it tells us not only the story of slavery, but of a stolen generation and the consequential underdevelopment of Africa. These have cumulatively led us to the notion that Africa and its peoples are somehow inferior, while the western world remains superior. We can see how history provides us with a context of why racism has been reinforced and upheld for centuries.

Fast-forward to the present day, and many people are oblivious to the history of racism or that they’ve been taught a whitewashed version of history. In 2020, a YouGov poll found that 32% of British people believe the British Empire is something to be proud of and it’s hard not to see a direct connection between education and attitude. Abolishing racism becomes an impossible task if you aren't privy to racism's context and history. It’s like fighting an invisible opponent who has had hundreds of years to prepare. 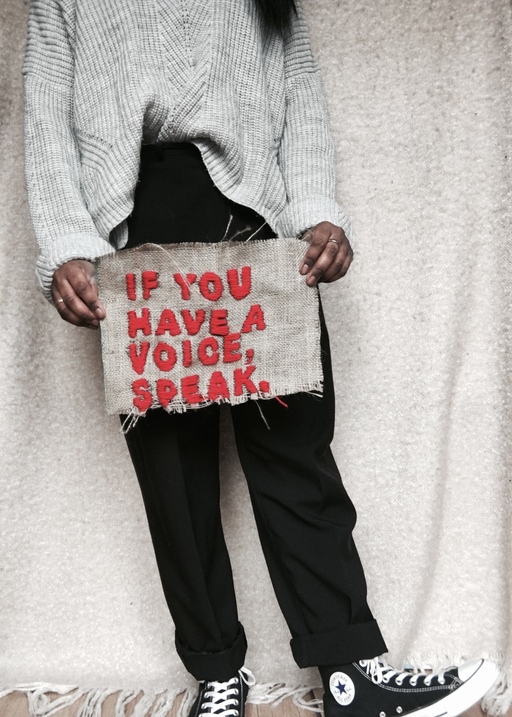 I think it would be naïve of me to hope that the petition goes through parliament the first time around. But this is not just a petition, it is the beginning of the end of living with a whitewashed version of history, and the beginning of the end scares people. This petition asks that we address the racism embedded in our educational institutions, society, and even our children. Why else would politicians be resistant to change? So, we must be prepared for the countless setbacks.

I am expecting setbacks, and I am prepared to try again and again and again. Because, by then, I hope that many more people will see the bigger picture and join me in calling for racial equality in Scottish society. When we protested last summer, some politicians called our actions violent, so what is left but our voices and our words. I have found that words can go a long way, but how far do they actually go when those in power refuse to have a conversation? But I believe there will come a point when politicians will have no other choice but to listen – or be left behind. It's one thing for a small group of close-minded friends to know that you are attempting to keep racism alive and thriving, but another thing to have your whole country know it too.

But it's not all doom and gloom as our recent efforts towards a better, more educated Scotland demonstrate. In 2018, Scotland became one of the first countries to include LGBTI education in schools, a step that is a beacon of hope. It’s a reminder that there is a future for a more inclusive education for generations to come.

The optimist in me can't help but imagine what's next, what comes after education. My ambitious answer is reparations and making amends for Scotland’s role in the history of slavery so that the world can truly begin to heal. What I do know is that people are still listening and whenever the opportunity arises for us to raise our voices, we must shout, louder than we ever have before – and shouting is what I intend to do.

For more information about the petition, visit parliament.scot/GettingInvolved/Petitions/BAMEHistory

'If You Have A Voice, Speak' artwork by Joke Amusan