The Edinburgh Queer Skate Collective is only a few months old but it's already making a lot of noise. We chat to the Collective about safe skating spaces, names and communal joy

It is a misty November morning in Edinburgh and on what would usually be a relatively under-utilised space outside of Loudon’s restaurant off New Street, a group of skateboarders are ringing in the day with a mighty racket. As Vaila, one of the founders of Edinburgh Queer Skate Collective, tells us later: “Twenty skateboarders can make a lot of noise.”

The Collective only started a few months ago but it’s already causing a stir. Jude, the other founder, was relatively new to the sport and met Vaila on Instagram. Vaila, a former professional snowboarder, had skated for years but all of the friends they skated with had left Edinburgh. And though both were comfortable skating amongst the groups of mostly boys who hang around the city’s skateparks, they knew that for other queer people it wasn’t so simple.

“Everyone you meet at the skate park is nice,” says Vaila. “The skaters there don’t care. They want to see you skate and improve. But I guess people who didn’t grow up in that environment see young boys at the skate park starting fires and stuff and it’s intimidating.”

Vaila and Jude took inspiration from other queer skate groups across the world. They wanted to create an environment where people could feel safe to learn, fall over and improve with others of the same ability. But while they appreciated the inclusive values of groups such as New York’s Brujas or Edinburgh’s own all-female skate crew, Skateboobs, they had one issue: the names.

The desire for a name that didn’t proscribe a gender to its members was important for Vaila and Jude as it made clear to non-binary, trans, and gender-diverse skaters that they would be welcome. As Jude notes of the name Skateboobs: “it’s inherently gendered regardless of whether the group is or not.”

Twice a week the Collective hosts meet-ups at various places across the city, from skateparks to streets to the Colinton Tunnel. They schedule them for the morning, when skateparks are at their quietest and least intimidating. Despite only existing for a matter of weeks, the Collective already have a regular attendance of around twenty people at each session. The gatherings are socially distanced, with most people wearing masks.

“I couldn’t in my right mind start up something where people were unsafe,” explains Jude. “But it’s great because in the future, when none of this is going on, the group will just become so much more connected.” 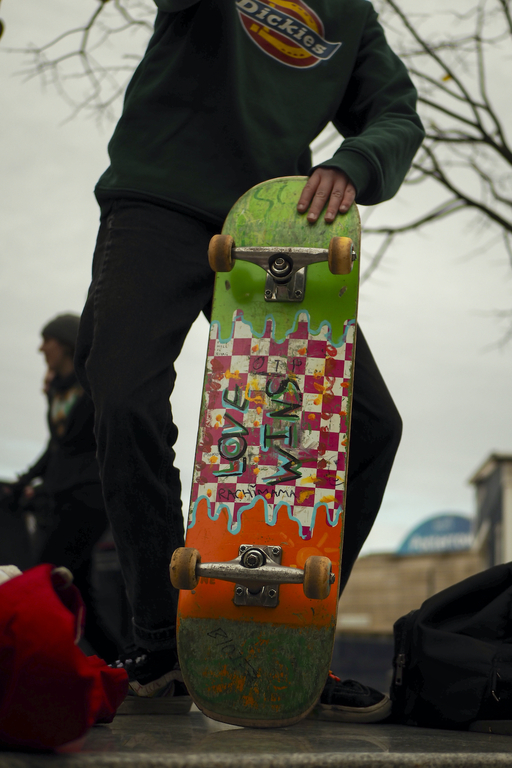 The Collective fosters an environment where people of any sexuality or gender identity can come and not have to worry about being the token queer skater. And it’s intersectional in more ways than one: though primarily a skateboarding group, they welcome anyone, including skateboarders, longboarders and roller skaters. The pandemic – and the social isolation, unemployment and boredom associated with it – has meant more people have taken up hobbies that, even a year ago, they may never have imagined themselves enjoying. Roller skating, for example, isn’t a sport you would think is naturally suited to the Scottish winter, yet one of the attendees, Evie, whizzes past, headphones blaring Elton John’s 'Crocodile Rock,' casually skating around like it’s Venice Beach.

“It’s probably one of the safest sports you can do right now,” they say. “It’s socially distanced by nature.” The Collective is valuable for Evie in others ways, too. With its strength-in-numbers sense of communal safety, the Collective gives Evie a space where they aren’t in danger of becoming a spectacle. “Roller skates really single you out and draw attention where you don’t necessarily want it. I was very reticent about taking it up because I knew I would probably get catcalled.”

Sorsha tells a similar story. She used to longboard around the Meadows but got fed up with the wolf-whistles. “I remember thinking that this would never happen to my male friends,” she says. “Being here with the Collective, it’s just a space where you can get away from that and clear your head. Get a bit of playfulness in your life in an environment that’s welcoming.”

As well as physical safety, the Collective also acts as a rare sober space for people to dip their toe in the queer community. “I’ve only worked out that I’m queer recently,” explains another attendee, Lili. “So, now, it’s really nice to have somewhere that I can go that feels safe for me.”

Vaila and Jude are modest about what they have created: their focus is on the skating. But, within weeks of setting up the Collective, other ones have sprung up in Glasgow, Dundee and even across the border in Newcastle. Jude hopes that in the future they can get some funding so that all the groups can get boards for prospective members who want to skate but can’t afford to. Among the hubbub of clattering boards, peals of laughter and the faint thrum of pop classics coming from Evie’s headphones, it’s clear that there was a need for the Collective. Even during a pandemic, the human desire for communal enjoyment knows no bounds… or genders.