How statues became ideological battlegrounds in 2020

Statues have loomed large over 2020, from Edward Colston sleeping with the fishes to the recent Mary Wollstonecraft disaster. We take a look at how questioning statues has been a questioning of our collective memory

This year, public space has been occupying our minds. The space we take up as we attempt to socially distance from others on narrow paths; the refuge of green spaces dotted around our cities; the rules of how much time we can spend in one place. Having only been allowed to see friends outside for much of 2020, the geopolitics of our outdoor, communal spaces has been heightened and the ever-present policing of them reinforced. As a friend and I are told to move along from sitting on the steps of an open, public space, I think about the lack of communal space in my city, Edinburgh, and the hostile vigilance of it. The protruding spikes used to discourage rough sleepers and the removal of homeless populations during festivals and celebrations.

But in the summer, there was a glorious retaking of public space after months of us being cooped up inside. Millions of demonstrators marched through America’s streets and in cities across the world to protest police brutality and the murder of George Floyd. Monuments were defaced and a dozen statues, most depicting Confederate figures, were pulled down, while, closer to home, demonstrators in Bristol toppled a statue of Edward Colston – a British slave trader who worked for a company responsible for the deaths of 19,000 African people onboard its slave ships – before rolling him down the street and pushing him into the harbour to hearty cheers.

The watery end to Colston’s statue led to some fiery public debates. Some argued that these statues are a record of our history and should be preserved – perhaps more appropriately in museums or archives than parks – while, for others, the very existence of a statue is a glorification of the ideology behind it. “I think a statue is a bid for immortality,” art historian Erin L. Thompson told the New York Times. “It’s a way of solidifying an idea and making it present to other people [...] It’s not the statues themselves but the point of view that they represent. And these are statues in public places, right? So these are statues claiming that this version of history is the public version of history.”

This is why campaigners in London have been fundraising for a decade for a public statue of Mary Wollstonecraft, the writer of Vindication of the Rights of Woman, often labelled the mother of early feminism. The UK has a woeful record of statues dedicated to women; in 2018, the number of statues of historical women was recorded as just 80 out of 828. So, to successfully campaign for a statue of Wollstonecraft was to assert that women belong in public spaces and in our collective memory.

That’s why the resulting effigy, unveiled early in November, was so disappointing. Perched on a silver blob, the great 18th-century thinker, writer and pioneering feminist is depicted as, well, a tiny, grumpy, naked lady. Although described by its artist as an “everywoman” that “emerges out of organic matter […] ready to challenge the world,” she looks more like she’s just stood up in the bath and realised she’s forgotten her towel. 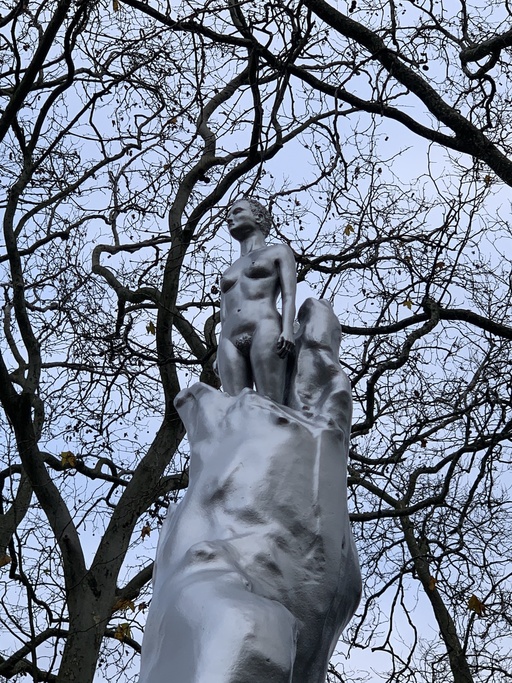 A white, thin, naked woman standing in as an “everywoman” is a bizarre, and inherently flawed, creative decision and speaks more to the artist’s – and society’s – limited imagination of what womanhood looks like. It’s especially disappointing when there are only two statues of Black women in the UK – Kelly Holmes and Mary Seacole – and a grand total of 21 that depict people of colour.

While statues and what they represent – as much our present as our past – are important, we also need to remember that they are not the final goal for feminism. We absolutely need to think critically about who we are choosing to memorialise in our public spaces but we also need to remember that erecting a statue of an upper-class, white woman will not fund women’s shelters, feed hungry families or grant safe access to asylum.

For many of us this year, our concept of public space has been altered and for those who don’t have the luxury of private, safe homes, the policing of these communal spaces has been especially harsh. Statues, streets and memorials have been at the forefront of ideological battles in 2020 and our questioning of them is also a questioning of what, and who, we are choosing to commemorate. It’s been some long-overdue, national soul-searching; but hopefully this look to the past will lead to a better future.

Mary on the Green photo by Issey Fraser