How lockdown created a new generation of gardeners

A new generation of gardeners has emerged from lockdown. We speak to some of them about how the hobby has become a coping mechanism for job loss, mental health and economic uncertainty

An estimated three million of us in the UK have turned to gardening in lockdown to deal with being furloughed, working from home and managing our mental health. As someone who feels the urge to shove their hands into soil when shit gets real, I dealt with a crushing job loss by returning to my indoor jungle with reckless abandon. Apparently, I wasn’t alone. On Instagram, I found my feed – usually glowing with the artificial sheen of plant influencers posing with sickeningly shiny exotic specimens – giving way to realistic representations of gardening. Everyone, it seemed, was making forays into this messy, muddy, much-loved hobby.

Some, like Dani from Glenrothes, were blessed in renting a home with a back garden. But, like so many of us resigned to renting as property prices climb, Dani tells me she “never wanted to put time and effort into [her garden] because it wasn’t really mine.” It was her boyfriend, based on a farm in the Highlands, who encouraged her to have a go at taming her wild, weedy garden. “Lockdown was really hard to get used to,” she explains. “Not only because I missed loved ones but because I'm so used to being able to go out into nature whenever I want. So the idea of having my own terrestrial paradise was too appealing to pass up.”

It also helped her and her partner stay connected when restrictions kept them apart. While Zoom dates and phone sex quickly became popular ways to maintain some semblance of intimacy during lockdown, they could also become tedious. But Dani found another way to keep her and her partner connected: “We’d send each other videos of us gardening. Who would have thought you could get turned on by watching someone plant potatoes!”

Millie, 23, also started gardening when she and her boyfriend were furloughed in April. Something they had been thinking about for a while as a fun, creative activity – and one that is literally and mentally grounding – was now possible, with “plenty of time to plan what we wanted and start our gardening journey.” The result is a garden bustling with bees and butterflies, boasting a mix of perennials, herbs, fruit and vegetable crops. Establishing a daily watering routine provides some stable ground and inspiration when these have otherwise been in short supply. 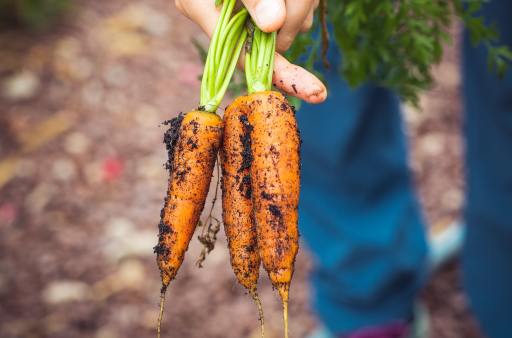 As lockdown gardening became a trend taking on a life of its own, there was a tangible, well-overdue change to the face of gardening. No longer was it to be seen as a hobby reserved for middle-class white boomers. When the Office for National Statistics (ONS) reported in May that one in eight British households don’t have a private garden, it tapped into swirling debates on social media which located gardens at the apex of an unequal society straddling huge disparities in wealth and welfare.

Digging deeper into ONS' local authority data reveals that in Scotland, 21% of homes in Dundee City and 19% of homes in Glasgow City have no private outdoor spaces. For flats in Edinburgh, Glasgow and Aberdeen city centres, private gardens are shared by an average of five flats – with tenements housing a mixture of students, families and professionals creating a creeping claustrophobia when the outside world was shutting down. But a new generation emerging from lockdown are proving that you don’t need a garden to be a gardener.

Miruna, a 26-year-old researcher living in an Edinburgh flat, is one such example. She began growing and collecting houseplants several months ago when searching for a lockdown hobby. Having brightened up her home with tropical specimens, succulents and chrysanthemums, she aims to grow herbs in the near future. Similarly, I spoke to French chef Max who used his time on furlough to grow fruit and veg in his Edinburgh flat – enjoying this so much that he now hopes to change career and become a gardener.

Meanwhile, young people have also mucked in at local gardening initiatives, transforming unruly tenement gardens left to rot by feckless landlords or growing fruit and veg to enjoy themselves and share with their wider communities. Collectives in and around Edinburgh, like Craigmillar Growers and Edible Estates, have supplied local families with starter packs of seeds. Over in Glasgow, Blackhill’s Growing, South Seeds and Urban Roots are just some of the organisations encouraging younger generations to garden. And it’s not merely to satisfy our boredom; it also helps ease our fears for a future in which climate crisis and economic uncertainty loom large.

Gardening has resurfaced as a nutritious, therapeutic and fun activity rooting us to a natural world when the material has failed us. The act of reclaiming this is in itself a radical act and gardening has always offered an alternative to a capitalistic way of life – demanding nothing of us except care and patience. It is only fitting, then, that in a time of unprecedented crisis a new generation is picking up the shovel and digging their way to a better world.