Hold, Speak, Release: Voice notes in the time of Coronavirus

While self-isolating, voice notes became a social lifeline for this writer. Here’s why they could well be the perfect form of lockdown communication

According to those over the age of 40, millennials are responsible for a bloody murder spree. We’ve somehow killed both marriage and divorce, annihilated mayonnaise (fair enough), massacred napkins (save the planet!), stabbed dinner dates in the back and even snuffed out good old fashioned exorcisms (RIP). But there’s one accusation of millennial murder that I can get behind: the death of the phone call. More than three quarters of UK adults own a smartphone but 25% aren’t using them to make calls and that percentage is only increasing.

Unsurprisingly, millennials are being blamed for the death of the phone call but can you really blame us? This is 2020 and there’s a new etiquette to calling: you only do it as a last resort for essential information or if it’s your mum. Sure there are loads of reasons flung at millennials for not liking phone calls – apparently, we’re anxious, lazy and/or bad at confrontation (not wrong) – but when messaging, FaceTime and social media are how most 20 to 30-somethings stay in touch now, calling a friend without a heads up just feels like bad manners.

One increasingly popular form of millennial communication is the voice note. While globally sending voice memos or notes on WhatsApp or Facebook is old news, the UK is still lagging behind getting on the voice note train. Allowing for the intimacy and individuality of a phone call, yet done at one’s own leisure like a text, the voice note has the best of both and is also a callback to the romantic neediness of a voicemail (remember those).

I got into voice notes after my friend, Riyoko, persisted in sending them to me. She herself got into them while living in Spain and international classmates casually used them all the time. Now voice notes are an established part of her routine: while eating breakfast she’ll listen to what friends have sent her, send her response and then listen to replies in the evening. What she likes most is the element of surprise – unlike a text popping up, you don’t know what’s in a voice note until you start listening. Both Riyoko and I tend to use voice notes for longer messages and anecdotes, stories or thoughts that we might not normally send in text form. Mine typically last between one to four minutes, while Riyoko thinks 20 minutes is the longest she’s gone, recorded on a walk to university.

Voice notes are definitely not for everyone and while Riyoko is an afficionado of the form, I send them regularly to only four or five people. Pre-coronavirus, I mostly used voice notes for communicating with long distance friends but seeing as we’re all long-distance for the foreseeable future, they’ve become a social lifeline for me staying in touch with people. Over the last few weeks, I’ve been using voice notes more than ever to check in with friends, share my thoughts during a Twilight marathon and attempt to entertain similarly self-isolating mates. Hearing other people’s voices is far more intimate than a cold text thread and speaking rather than typing frustrations feels far healthier. 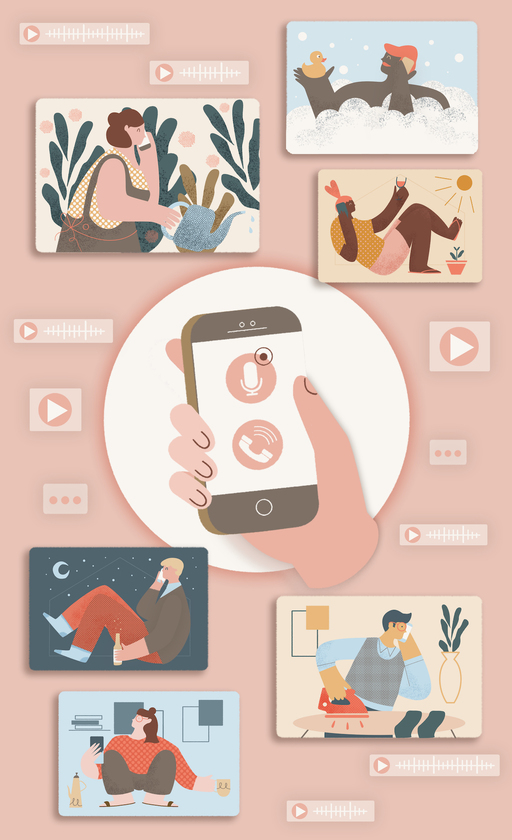 I’m not the only person who seems to be using voice notes more since self-isolation began. I’ve noticed more friends doing it, and one, Jamie, posted on Instagram offering to send them to people while he took a step back from social media. I asked him to send me a voice note explaining why he liked them and his reasons were similar to mine: he likes to hear friends’ voices but in a different context to an in-person conversation and you can listen to them at your leisure. He also points out they have great romantic potential as an intimate yet disposable sort of letter.

There’s something also wonderfully self-indulgent to voice notes: you give yourself space, time and an audience to monologue about anything, something that obviously doesn’t work in any other form of communication other than perhaps, as Jamie pointed out, a letter or, god forbid, a voicemail. It’s unsurprising that millennials – the generation that adores the other popular monologue communicatory form, podcasts – seem to enjoy voice noting more than Boomers or Gen Z.

Look, I understand the criticisms of voice notes – they take longer to listen to than glancing at a text, are the bane of group chats and please don’t ever use them to send actually useful information – but right now we have nothing but time on our hands. Receiving a voice note from a friend who is deliberating between making a self-isolation Pot Noodle or a self-isolation tray of oven chips for dinner is sometimes the highlight of my day.

At a time when anxiety levels are through the roof and we’re all feeling the effects of not having been to the pub in weeks, we need some joy in our lives that isn't on Netflix. May I recommend the humble voice note.