Fall where they may: Tarot in the internet age

Tarot card readings have never been more popular. One writer explores how this boom is a cause and effect of the internet

Storytelling in the digital age has reached a crossroads. Torn between expressing ourselves as who we are and who we want to be, we publish stories of trauma alongside trivial anecdotes in order to enter the elite ranks of social media apps. The stories we tell online are increasingly marked by efforts to appeal to unknown audiences as we meticulously repackage our appearances, stories and selves for the sake of performance. The commercialisation of self-care means our frantic search for inner peace is supposed to be practised and performed outwardly – separated from the spheres of our own time, space and comfort zones. So what happens when an ancient storytelling and deeply spiritual practice like tarot reading re-emerges in the context of this brave new world of online performativity?

What began as a card game became layered with superstition when introduced into the occult in the late 18th century. Now, the 78 cards in a tarot deck are a coveted tool of modern witches, as well as those favouring a more spiritual form of self-care via the meanings in tarot’s rich symbolism. These might be located in the universal, human trajectory of the Fool’s Journey expressed in the Major Arcana’s 22 cards. Those found in the remaining 56 cards, constituting the Minor Arcana, are representations of everyday trials and tribulations and present four different themes of life as four different suits: wands, pentacles, cups and swords.

For my flatmate, Lorna, there lies an inherent optimism and reassurance in reading one’s tarot cards which helps her “feel less alone, because I know that others have shared in the ‘universal’ experiences in the cards.” Nor does this take away from the fact that tarot cards’ fluidity of didacticism and artistry “differ from deck to deck, and can have totally different meanings and interpretations from person to person.” Increasingly, tarot reading has become what some close-knit friendships are built upon, as Lorna and friend, Naomi, confirm: “It’s such a bonding experience. I think it is a really good conduit to talk about emotions and events. It’s hard in everyday life to just bring up how you are feeling. When Lorna and I have done tarot together it’s definitely a jumping off point for us to discuss shit that is going down. It’s just an effective way to access deeper emotions.”

Naomi and Lorna introduced me to tarot during very different emotional stages of my life. Naomi read my tarot after a particularly bad break-up, and Lorna after I had finally begun to heal and feel more like myself again. Though I regularly claim to conduct myself as an open book, on these occasions, I discovered that having my cards read to me would unearth issues often obfuscated by my bravado. Beloved friends reading my tarot became a powerful tool for improving my relationship with myself.

Many new fans of tarot similarly find themselves brought to it through friends who, like Naomi, enjoy the mutually beneficial experience of tarot reading. “I offer to read my friends’ cards because I want to offer something to them [...] You’re offering a kind of set space and time to focus on one person’s psyche, whether it’s hidden or obvious,” she says.

Some even feel it offers a kind of “free therapy,” providing an inexpensive, intimate and accessible way of grounding yourself and cultivating generosity while capitalism pushes us to compete against each other to succeed. “We live in a pretty melodramatic, intense environment, where there are so many pressures coming from different places,” says Peter, a young British director based in New York. He elaborates: “You’re kind of always like a pot ready to explode. Everyone’s just internally screaming and very few of us can afford to get help anywhere. Therapy is expensive. Healthcare for me, in America, is very expensive, and even therapy in the UK isn’t readily available for people.” 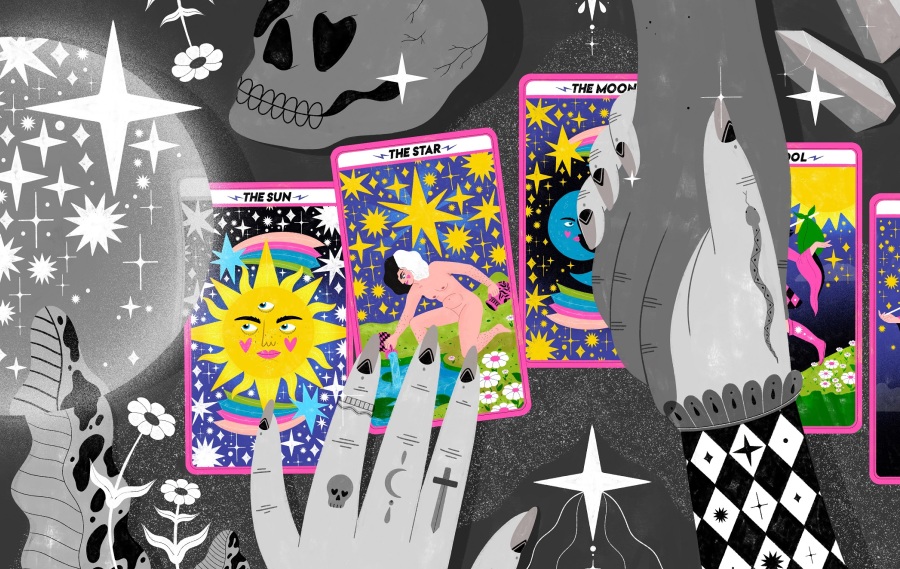 The cost and accessibility of mental healthcare remains a significant issue despite the overwhelming visible discussions happening daily on social media. At the very least, tarot provides some solace for those outcast from the means of being seen or heard by these costly and unavailable services. But its visual, spiritual and ritualistic mode of self-exploration also creates a space for the experiences of minorities, ostracised from mainstream depictions of mental health issues, to be shared and explored.

The Asian American Tarot: A Mental Health Project was created in 2016 as a testament to this, divined by Mimi Khúc, a professor in Asian-American Studies at the University of Maryland. On her highly successful Kickstarter campaign, Khúc establishes that “because Asian American wellness fundamentally depends upon anti-racism, our deck is an anti-racist hack for the traditional deck: take out the existing major arcana, insert ours, and voila! An Asian American mental health tarot, a little self-care magic.” In the Asian American Tarot’s Major Arcana, you’ll find the traditional, archetypal tarot figures replaced with The Refugee, The Shopkeeper, The Foreigner as well as an open-ended articulation of Asian American history and livelihoods.

There’s been a wave of likewise revisions and modifications of traditional tarot decks to match the growing desire of tarot fans to see themselves in their cards. Antonina uses tarot cards as part of her witchcraft, and tells me of her plans to make her own decks: “I think the decks I make will be personal to my own ideas of the meanings behind the tarot cards and I’ll try to illustrate them in that way; there are so many decks out there and I really encourage people to find one that fits perfectly with themselves and one they are in love with.”

Such ideas inspire the production of tarot decks infused with messages and art drawn from the stories of LGBTQ+ and multicultural communities. Like The Asian American Tarot, The Next World Tarot was born from a Kickstarter campaign and driven by the desire to re-establish defiantly queer, inclusive readings and illustrations, once so visible in similarly revolutionary decks like the famed lesbian feminist cards of Thea’s Tarot. These creative reenvisionings of decks is reasserting the spirituality of tarot reading as exclusive from social hierarchies, rallying against a Fool’s Journey designed and devised as distinctly white and heteronormative.

The intrinsic capabilities of tarot cards to become active tools for communication are evident, as many internet communities dedicated to tarot cards and readings now double as proto-covens, where strangers gather to share their experiences and offer free readings to practise and connect with one another. Digital domains like Tarot Nerds or tarot reading Reddit threads connect communities of people through, but also far beyond the realm of internet interfaces.

With this, it seems that modern tarot is making a case for the modern world, with a show of solidarity to those suffering outside mainstream political and cultural arenas. In her book, Modern Tarot, Michelle Tea tells us to “be the Three of Cups”, a card which typically depicts three women lifting their glasses, seemingly celebrating each other. This undoubtedly resonates among those I’ve spoken to about their love of tarot – which is as much about loving yourself and your closest friends as about letting the cards fall where they may.