Cursed Times: Thinking about the future in 2020

It was the worst of times, it was the most cursed of times. Our Intersections Editor takes stock of the last few months and wrestles with how to move on

But while the future has been on my mind, equally so is the past. Because how can we start moving forward when we haven’t even begun to process the past few months? Depression rates have doubled, with young people and LGBTQ+ people's mental health the most impacted. A report found that people of Black and Asian origin are disproportionately dying from COVID-19 in the UK, a fact taking its toll on the mental health of those communities. The resurgence of the Black Lives Matter movement, too, has had a colossal impact on Black people's mental health. The world is traumatised from 2020.

But the pubs are open, Britons are going on their holidays and walking around my neighbourhood in Edinburgh, you’d be forgiven for thinking that we’re not currently living through a global pandemic and the worst recession since records began in 1955. There’s a cursed sense of Keep Calm and Carry On in the air, an attempt to move on, or, maybe more accurately, an attempt to repress the urge to have a nervous breakdown in public, as if ignoring the trauma of the last few months will leave it behind.

Lockdown has fucked everyone up. It’s also exemplified many of the things that we already know: that the British government cares more about marketing than people's lives. That we rely on strangers much more than we think we do and that we can’t survive without our communities. That this country's hegemonic ideology is built on a foundation of individualism and performativity as one week, we’re clapping for the NHS and the next week, we’re threatening to deport its nurses.

And then in June, during a resurgence of Black Lives Matter protests, there was the Instagram black square, perhaps the pinnacle of 2020’s individualism and performativity. Ignoring Black Lives Matter activists’ requests for people not to post black squares using the movement’s hashtag, hundreds of thousands flooded social media. Captions babbled about using this time to learn and reflect, while also blocking out information for demonstrators.

The discourse around Black Lives Matter for white liberalism became one of self-growth, often through the lens of the anti-racist reading list. Magazines that have no Black people on staff published lists about how to be better allies, while books grabbed haphazardly from shelves were propped up, perfectly lit and posted on Instagram. The Colour Purple, White Fragility, a Toni Morrison novel, Why I’m No Longer Talking to White People About Race and Queenie were presented as a monolithic tome of content that will turn you woke. Instagram is not the place to go for nuance, but seeing these books – their contexts, complexities and intentions – presented as vessels of self-care by white liberals was maybe the most cursed moment in a very cursed year. Educating yourself is important. Reading books is important. But tweeting about reading a book by a Black author is not going to make you anti-racist. 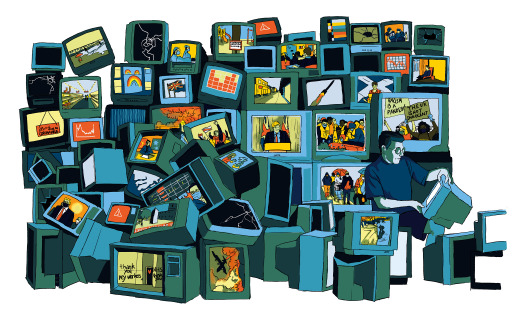 Social media went from photos of burnt banana bread to black squares, back to photos of burnt banana bread before you could say institutional racial discrimination. Despite promises of better “representation,” “diversity” and “inclusion” behind-the-scenes in companies and organisations, little change seems to have happened. We posted a black square, now we are moving on.

Looking ahead is not inherently a bad thing. Neither is optimism. They are essential in the fight to dismantle institutional inequalities. But we need to move forward by looking back. We need to understand this country’s history and the reasons why every aspect of our society, culture and legislation is actively hostile to those who are the most vulnerable. We need to understand our position in the world by learning about Britain’s colonial past, its roots still found across the globe. Because how can we move forward without making reparations or apologies or acknowledgements? How can we move forward when it takes a video of a Black man being killed for a white person to pick up a book?

One thing that I’ve realised over the last few months is that there is potential in everything. Potential for bad things to be made good and good things to be made bad. There’s potential for language to evolve, laws to be passed, institutions to be held accountable. Governments can change and people can change. There is potential in the future. But potential isn’t an inevitability; conscious action and mass movement are needed to bring about change. I’m not all that optimistic for the future but I can see its potential. It’s not enough but, right now, it’s something and maybe that's enough.