As drag queens hit the mainstream, we quiz Scottish drag kings Agent Cooper and King Biff on the art of transforming into a man...

"I use Diane Torr’s old prosthetic cocks." At a local LGBT+ bar, Agent Cooper and King Biff – drag king partners in crime – are framed against a painting of a generously-endowed man, which is proving popular with the other patrons. The cock is brought to our attention again and again with each photo that’s snapped, lighting them all up like a triptych of gender fuckery. We’re discussing the act of packing. "But you can use anything," Cooper continues. "A rolled-up sock, for example, or some cotton wool."

However you choose to create your ephemeral dick, both Cooper and Biff agree that having something between your legs makes a huge psychological difference to the drag king art, as well as physically bringing a new stature and gait. And there’s something to be said for dressing holistically, says Cooper."If you’re going out as a drag king in pink frillies, it might be what you want to do and you’re welcome to, but a pack does help fill the Y-fronts."

It was the late, great Diane Torr, drag king, performance artist and gender activist, who inspired Cooper to begin exploring drag. Torr’s Man for a Day workshops – as well as the resultant film and her book, Sex, Drag, and Male Roles: Investigating Gender as Performance – remain an essential resource for people interested in developing their drag king persona. Designed to explore gender identity, Torr’s output holds up a microscope to the male experience versus the female experience – in offices, in bars, in car dealerships – how men occupy space, and the concept of, literally, wearing the trousers.

"She was capable of complete transformation – into characters like Danny King and Mister EE – by adopting supposed inherently ‘god given’ male traits, and was able to distill and teach them to others," says Cooper. "We became friends only three years ago, but she made a massive impact on me. I think there's definitely a sense now that she was before her time and the importance of her work is only really becoming clear now as queer identities are more visible, discussed and explored."

Torr was based in Glasgow until her death last year, meaning Scotland was graced with a drag king pioneer leading the way and inspiring up-and-comers in a scene that can often be overlooked. Cooper took what she learned from Torr and brought it to her performance space, Dive Queer Party – an anything-goes performance party for, by and of the people. Biff’s journey to drag was a little different, a performance-based discovery of self.

"I was going to see queer work and more and more felt like that was where I felt happiest and most comfortable," they say. "I was shy and I felt like I wasn’t sure about how to approach getting into these kind of things, so I went in the route that I knew." That route was through funding from SURGE, a company that supports street arts, physical theatre and circus in Scotland. Through this, Biff was granted some space to try out at scratch nights and develop their work, before beginning to perform wherever they could. One place that gave them a gig was Dive, which is where the relationship with Cooper began. 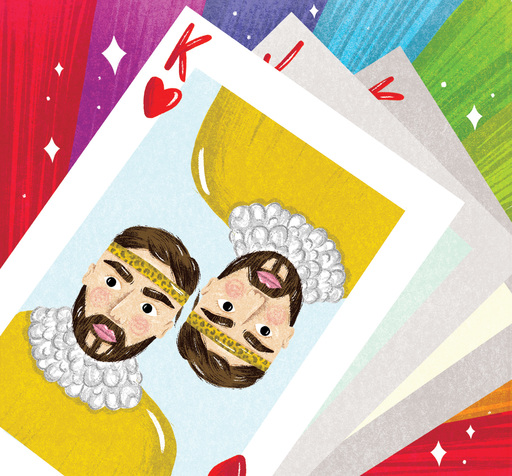 Talking to Biff and Cooper feels particularly pertinent when you take into consideration drag’s steady rise to the near-mainstream. The success of RuPaul’s Drag Race is not to be sniffed at: the show’s tenth series comes out this year, while the third season of its All Stars spin-off is on air now. Not to mention Drag Race alumnus Courtney Act, who beat out Ann Widdecombe – despite Widdecombe’s hateful comments, backward opinions and unrepentant homophobia and transphobia – to win the most recent Celebrity Big Brother UK. While Act’s triumph has been widely hailed as the ugliness of the past losing out to the spoils of the future – a polyamorous, gender fluid drag queen succeeding over a closed-minded Tory – there’s still a bit of a disparity between drag queens and drag kings.

"It's widely discussed that, in a patriarchal society, women taking on masculine roles and identities is perceived by the powerful, public and media as threatening and disruptive and therefore doesn't get the same air time or profile," says Cooper. She is pretty positive about drag’s growing popularity though, citing this as a good thing for the visibility of queer art forms and narratives. And both admit that it’s exciting to see the blossoming scene throwing up all kinds of opportunities in Scotland, and more widely across the UK. The Rabbit Hole: King’s Court at CC Blooms in Edinburgh leads the way alongside Bar Wotever, a queer variety show based in the Royal Vauxhall Tavern in London and The Glory, a London bar that counts drag artists among its co-owners.

Cooper and Biff don’t take their safety for granted; both admit they’re very aware of how lucky they are to generally feel unthreatened when in drag. Cooper says having a community is to thank for that – "Having a buddy and other folks around you that are doing it and trying it gives you so much confidence." Biff recalls being in very macho environments, like proper old man pubs, and no one blinking an eye, and has only ever felt uncomfortable when presenting as femme, but with a beard.

"That’s when things have gotten strange. But for lots of gender queer, non-binary and trans friends, that’s a daily occurrence, and I don’t have to deal with that. It’s really complex, so there’s always risk. We live in a fairly tolerant city, but nothing is perfect. Lots of friends have had pretty terrible experiences, and it’s always in the back of my mind that it could happen."

Ultimately, though, Cooper recognises the privilege of being born and based in Scotland, a country once voted the best place in the world to live for LGBT+ people and where, up until recently, three out of five political party leaders openly identified as gay. "But these are all rights and privileges that were hard fought and could so easily be taken away. World events are spurring both massive leaps forward and tragic steps back for LGBTIQ rights around the world, so we want to spread a message of expressive freedom and acceptance, and those on stage and in the audience to stand up and come together in celebration of difference, promoting a world where you can be whoever you want to be, however you want to be, wherever you want to be."

The LGBT+ scene is a tight-knit and often niche place, but – while they haven’t yet reached the heights of RuPaul’s Drag Race – kings are on the rise. As well as Biff and Cooper, there are so many creative and talented kings to consider. Edinburgh’s Eli Buck supported reigning Drag Race champion Sasha Velour on her February tour; Landon Cider, based in LA with 22k+ followers on Instagram, is king of transformation, morphing into Grandpa Munster, Gaston or Buzz Lightyear with the flick of a make-up brush. London’s Adam All is founder of BOi BOX and resident king at She Soho while drag king troupe Pecs perform their binary-bending burlesque throughout the capital. These artists and performers, along with anyone else slapping on a moustache of an evening, are examples of how rounded and exciting drag kings are. Whether it’s creating genius cosplay, screwing with gender’s performativity, inhabiting male spaces or ripping the piss out of the patriarchy on stage, there is much to be discovered – and admired – in the art.