Janelle Monáe’s third album is protest music hidden beneath the guise of a party record but, more importantly, it's a celebration of Monáe herself – her sexuality, her femininity, her identity

Self-love is hard – harder still when the world doesn’t appreciate or even recognise your existence. Such is the crux of Janelle Monáe’s third album Dirty Computer, which is at once a scathing repudiation of a society which muzzles individuality and a raucous celebration of that individuality all the same. A 48-minute epic, it’s the perfect defiant soundtrack to these turbulent times.

In the album’s accompanying ‘Emotion Picture’, Monáe stars alongside Tessa Thompson as a cyborg – half human, half machine – who is captured by, and eventually escapes from, a homophobic, totalitarian society. “You were dirty if you looked different. You were dirty if you refused to live the way they dictated,” Monáe narrates as the film begins. Blunt? Maybe, but in 2018 how could it not be?

Throughout the video, high-concept sci-fi weirdness and bright, vibrant visuals mask a cautionary tale of what happens when we give up our identity to appease 'the man'. Though the film ends on a hopeful note for our protagonists, all is definitely not well within its high-tech dystopia. Dirty Computer similarly wraps its weighty themes in slick production and funky guitar licks; like the film, it’s protest music hidden beneath the guise of a party album.

Not that Monáe isn’t having fun while the world crumbles around her. Screwed is equal parts a fearful reflection on the current state of the U.S. of A. and an absolute bop – its title a euphemism for getting fucked both literally and figuratively. 'We go sex crazy / But we feel so screwed,' she sings together with guest Zoë Kravitz on the chorus over a rich bass and glittering synths, before taking more pointed shots at the American president and Russia in a fierce coda. A reverent nod to Prince’s 1999, the song is an end-of-the-world party anthem.

The spirit of Monáe’s mentor looms large over the album, perhaps nowhere more so than in the gloriously smutty lead single Make Me Feel. From her cheeky sensuality to the track’s funkadelic electric guitar – as well as its synth line, which was a literal gift to Monáe from the Purple One himself before he passed – it’s a fittingly sexy tribute to His Royal Badness. There’s even mention of a 'shag carpet'; what more needs to be said?

Looking past the eroticism though, the beating heart of Dirty Computer is its celebration of queer women. Sweet and spicy Take a Byte finds Monáe flirting with and comforting a lover insecure about their sexuality, while Pynk was inspired by, as she describes, “creation, self love, sexuality, and pussy power.” With its soft synth beat and gentle, carnal imagery, it’s an intimate and affectionate ode to femininity. 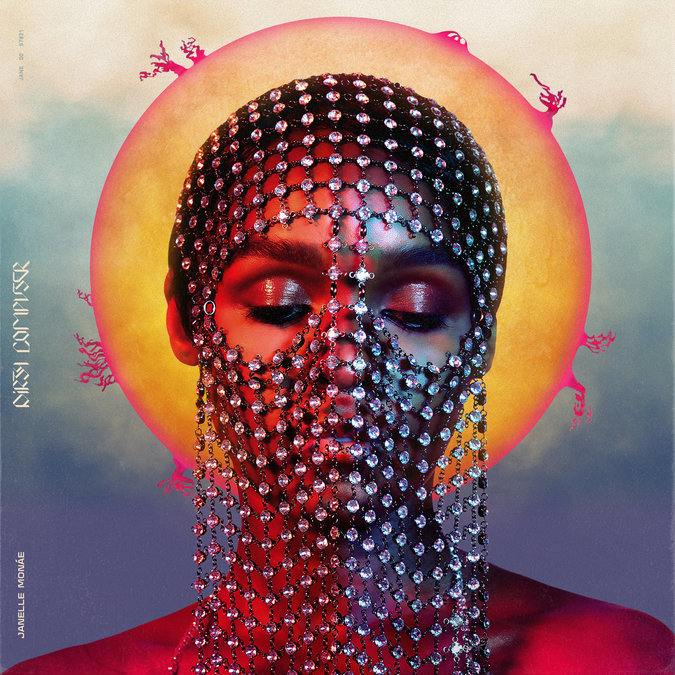 I Got The Juice, on the other hand, is a no-holds-barred battle cry. 'If you try to grab my pussy cat, this pussy grab you back,' Monáe repeats – a denunciation of you-know-who (obviously) but, more than that, a call to arms. Biting back at a government that seems to have no qualms oppressing her rights, Django Jane is a scathing disavowal of a society where women – namely black women – are an afterthought. 'Let the vagina have a monologue,' she stresses over a trap beat, her words seething with indignation.

“It's gon' be my America before it's all over,” reverend Sean McMillan says in a spoken word coda on closing track Americans, following declarations that a country which would discriminate against women, black and queer people is not one that he would call home. Riding a gleaming synth melody, his words echo a sentiment Monáe expresses in the opening lines of the song: 'Hate all around you, don't have to face it on your own / We will win this fight.' Standing in solidarity with those who are oppressed, her parting message is ultimately one of hope.

Indeed, to reduce Dirty Computer to its anger would be remiss. It’s a scathing renunciation of the dangerous times we’re living in, for sure, but it’s also a rallying cry of self-love. More than anything though, it’s a celebration of Monáe herself – her sexuality, her femininity, her identity.