On Crushing, Australian singer-songwriter Julia Jacklin creates something entirely original from the everyday experience of heartbreak

It takes a special kind of artist to take a subject as commonplace as heartbreak and make music that sounds utterly fresh. This is arguably the most remarkable aspect of Crushing, the stunning sophomore LP from Sydney-based singer-songwriter Julia Jacklin. The record finds Jacklin in a strange place in her life: readjusting to solitude, processing the vast array of emotions that arise post-breakup. Over ten arresting tracks, Jacklin picks up the pieces of herself after a broken relationship and studies the results in the mirror. At times she is defiant, empowered, devastated, and guilty. Most of all, she reclaims aspects of herself that were lost or hidden. ‘I don’t wanna be touched all the time’, she declares early on, setting her own agenda. ‘I raised my body up to be mine.’

Crushing begins on the tarmac of Sydney airport, Jacklin shaking her head at her unfortunate ex, who's been caught smoking in an aeroplane bathroom, ruining their weekend away. Body is a slow-burner: a prelude to the record, aching with suppressed rage. The strength of emotion in the vocals paints a startlingly vivid picture: Jacklin stony-faced on the windy runway, tears of defiance in her eyes as she tells her lover, ‘I’m gonna leave you / I’m not a good woman when you’re around.’ The soundscape is sparse and spacious as a desert, dark bass and steady drums giving way to interludes of moody piano.

It doesn’t build to show off Jacklin’s remarkable vocal range, as many of her songs do, instead remaining in this mood of tired frustration. Jacklin’s words are painstakingly chosen and arranged, a succinct stream of consciousness that gives just enough away at just the right times. She delves into the personal, remembering an intimate photograph taken by her ex-lover and wondering if they would use it against her. ‘I guess it’s just my life / And it’s just my body,’ she sighs, seemingly defeated – though what follows proves otherwise.

Jacklin’s voice is absolutely bewitching; undoubtedly the glue that holds Crushing together. There's a beauty to the soft moments (When the Family Flies In, Comfort), and sheer power in the high. She loses control for the first time on Pressure to Party, a track which Jacklin describes as her “three-minute scream”. The desperation of the vocals and the sorrowful lyrics juxtapose the high tempo backing, creating a feeling of standing still while the world continues busily around you. Jacklin lists the often contradictory pressures she felt in this post-relationship limbo: to justify the breakup; to take time to heal; to find somebody new; to flourish as an independent woman.

Throughout the record Jacklin presents herself as the heartbreaker rather than the one who has had their heart broken – an experience that is less often explored, particularly by a woman. Don’t Know How to Keep Loving You depicts the loneliness of falling out of love; of accepting that passion has given away to familiarity and boredom. Though mournful, what resonates is Jacklin’s respect for herself, and her decision that things need to end. As though to justify her choice to herself, she focuses on all the feelings she had that are now lost – ‘I want to want you / I want to feel it all every time that we kiss’ – all the things she not only wants, but deserves.

You Were Right depicts frustration at a person who was ‘always trying to force my taste’, stifling her personality all the while. It doesn’t matter that in the end they were right; what matters is that the choices she makes are her own. Once again, Jacklin’s voice trembles with a quiet rage that is restrained, understated, and distinctly feminine.

Relationships are complex and deeply personal things, and they evoke myriad feelings and behaviours that can be turbulent and unpredictable – particularly when they end. Crushing captures this with grace, emotional maturity and forgiveness, in a way that is touchingly human. Turn Me Down begins as a lively track with a mellow riff, describing an ill-advised two-day road trip to Melbourne with a learner driver and a nervous passenger. Halfway through, the lightheartedness is broken as Jacklin asks her lover to end their relationship so she doesn’t have to. ‘Please just turn me down,’ she begs, and each time she repeats her imploration the music accelerates to a devastating climax. After a long pause, the same riff returns, like determined small-talk after a row. And though it tries to be as nonchalant as before, something in the mood has changed that cannot change back.

‘Maybe I’ll see you in a supermarket someday,’ concludes Jacklin, as though they are strangers. 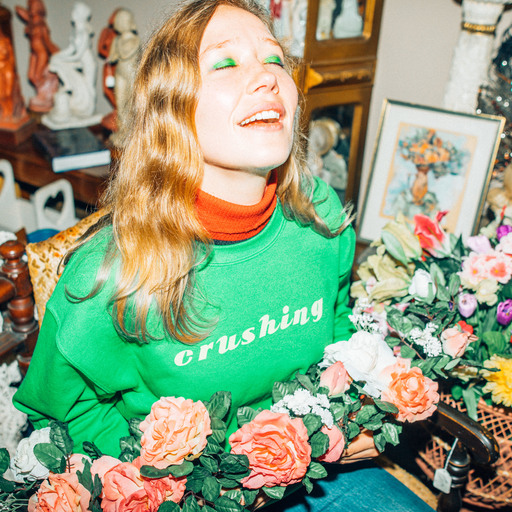