Robyn's eighth album, and her first in as many years, can capture a single heartbeat – one breathless second – and spin it into perfect, complex pop treasure

Time is fluid when Robyn’s in charge. It’s her driving force, the ticking bomb, the pulsing bass, the beating heart. And when she clicks her stopwatch, she can freeze for you a perfect, crystallised moment. She captures a single heartbeat, one breathless second, and spins it into perfect, complex pop treasure. Feverish fans the whole world over agree that Robyn can make us move and, even more importantly, make us feel like few other artists can.

Missing U, Honey’s first single, puts into lyrics this act of crystallisation. Metronomy's Joseph Mount’s blissful, sun-kissed arpeggios dance in the light, helping us bear an almost unbearable sadness. 'This part of you / This clock that stopped / This residue / It's all I’ve got,' she sings, making a monument out of an impossible feeling: 'I’ve turned all my sorrow into glass.'

Honey is the Swedish star’s eighth album, and her first full-length in as many years. Trusted collaborator Klas Åhlund heads up the album's short list of select collaborators and, in an Instagram post, Robyn explained that the tracks are “more or less in the order I wrote them.” In recent interviews, she revealed that the break-up (and make-up) of a long-term relationship and the death of a close friend informs the emotional journey documented over its nine tracks.

Honey feels softer and smoother than her previous LPs, and Robyn’s said that she found influence in the club – in the wave-like, time-bending power that a great DJ can harness for their dancers. The mood shifts almost imperceptibly, the edges are smoothed. The persuasion and desperation of Baby Forgive Me bleeds into the urgency and compassion of Send to Robin Immediately, a collaboration with Kindness’ Adam Bainbridge. 'If you got something to say, say it right away […] / Know you got nothing to lose, there’s no time to waste,' Robyn urges. Even so: it’s not until halfway through that second song that the beat drops. 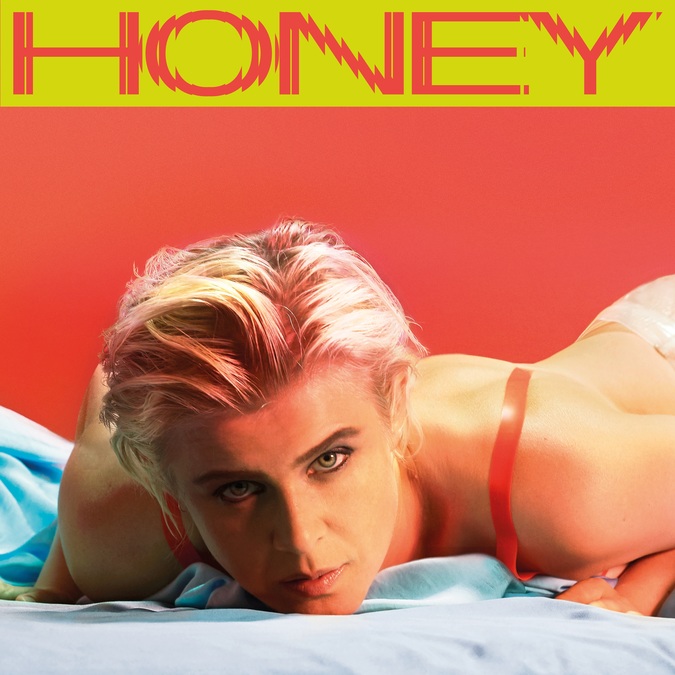 The title track too is an ode to delayed gratification. Honey's (already iconic) first line: 'No, you’re not gonna get what you need / But baby, I have what you want' seems to acknowledge her fans’ desperate hunt for new album hints after a demo of the song was on Girls, as well as the lack of spiky choruses in favour of Honey’s sensual softness. The song insists on celebrating vulnerability, risking pain for something sweeter: 'Can you open up to the pleasure? / Suck it up inside like a treasure.' The bass, at first tinny and distanced, grows woozier, sticker, closer.

But, more than any other track on Honey, Because It’s In The Music reveals Robyn’s time-travelling secrets. It’s a song about a song. More specifically, it shows Robyn vividly, viscerally re-feeling the memories she’s tied to that song. 'Yeah, we were dancing to it,' she sings, by way of explanation. 'I’m right back in that moment / And it makes me want to cry.' Mount sprinkles disco over a slow jam bass that’s just vague enough for the listener to spin out of this song for a moment, and into another one, a memory of their own. Then she asks the question: 'I wonder when you hear it / Are you getting that same feeling?' It’s all there – that need to know if your memories look the same to someone else, that feeling of falling in love with a song that so precisely mirrors an exact moment in time.

It feels fitting that Ever Again, the album’s last track, radiates sweetness and sincerity. Robyn promises us: 'I’m only gonna sing about love / Ever again! / Never gonna let it happen / Then it won’t be all for nothing. / Oh, I swear I’m never gonna be brokenhearted / Ever again!' And finally, at the three minute-mark, we have it! A huge, synth explosion! The breakdown we’ve been waiting for! The last 90 seconds of Robyn’s Honey are a euphoric celebration of pain, optimism, strobes, sweat, stilettos and broken bottles. As ever, Robyn lifts you up despite everything, because of everything.

Honey was released on 26 Oct via Konichiwa and Interscope