As Parquet Courts slip in and out of styles on Wide Awake!, what has resulted is an urgent work about letting yourself go amidst a storm of terribleness

Total Football, the opening track of Parquet Courts’ Wide Awake!, contains a multitude of killer lines, filled with wit and wisdom, and delivered with the unimpeachable enthusiasm that is now expected of the New York four-piece. But one sticks out: 'We are troubled by your soft curiosity / But delighted to be anti everything you were taught.' It’s a challenge, a manifesto introduction, and a fuck you to (some) listeners: it says, if you’re not fully on board with what we are about to tell you over the course of this record, then stop listening. It is a “thank you, next” to anyone who might dream of showing up at a Parquet Courts gig wearing a MAGA hat; it is a not-so-kindly shut up to any beer-fuelled white lads heckling between songs. Parquet Courts want you to know that they are disgusted, and they don’t care if you take offence to that.

Setting out early on in this way may seem like screaming into the echo chamber. Actually, Wide Awake! asks for the ear of the liberally-minded, environmentally-conscious, pro-gun regulation audience because it is meant as much as a respite to the doom and gloom of the world, as it is a reaction to it. Take the title track, which is a carnival of whistles and percussion, that plays on the idea of the modern, accepting, socially-conscious individual – a much chewed over matter. It is also over the top, funny, but not insincere. Most discordantly with its themes, it makes you want to dance till your feet hurt.

When we catch up with the band’s Sean Yeaton during their European tour in mid-November, he agrees: “It’s easier for a band like ours to have a more energetic reaction to certain devastating events because we have to play these songs every night. If we’re going to be playing these songs for a year or longer live, what kind of emotion do we want to conjure in the crowd? Most people are dealing with so much shit that bums them out, we might as well be doing something that’s uplifting.”

After a prolific run of great albums, there were more than a few reasons to feel apprehensive about Wide Awake!. There’s that exclamation mark – floating there, begging you not to take the album seriously. Of course, that’s kind of the point. This is unserious music about serious things: the rising frequency of natural disasters and sea levels (Before the Water Gets Too High); homelessness and substance abuse (Freebird II); our increasingly bloody and frightening everyday lives (Violence). If anything, things have only gotten worse. 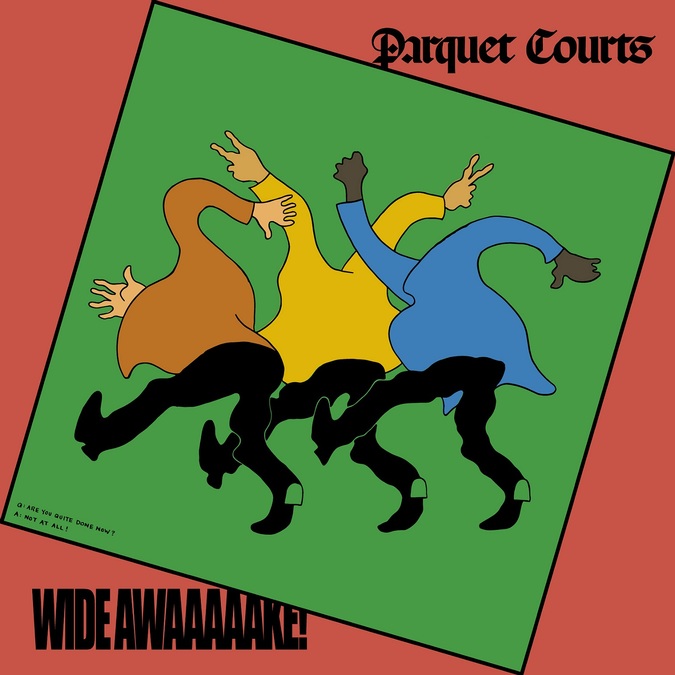 “In the period of time that’s passed since we wrote, recorded and released Wide Awake!, a lot of devastatingly apocalyptic things have happened in the US,” says Yeaton. “The immediate reaction, still, is one of extreme disdain and general depression. I don’t know that Wide Awake! would be the same if we were starting it now, but I can imagine the world as we know it having a pretty big influence on everything we do from now on. It’s been a pretty massive fucking shift.”

Also significant was the presence of Brian Burton, otherwise known as Danger Mouse, as producer – the first time the band have enlisted the direction of an outside influence. In the end, those worries – Danger Mouse has been attached to some lesser works recently, though that dismisses his presence on some of The Black Keys’ best albums, and a defining collaboration with the enigmatic Sparklehorse – were misplaced. Burton did not so much exert an artistic influence on Wide Awake!, as bring everything into focus.

“Brian helped us zero in on the songs that were the strongest, and strengthen them even more,” agrees Yeaton. “For the writing and arrangement process, he was pretty hands-off. It’s kind of a weird compliment to give somebody: on the one hand, he technically did an incredible job of helping make a great Parquet Courts record, while that makes it seem like he didn’t have an awful lot to do with it. But in reality, he completely understood our language and was just like a fifth member of the band. For him to take himself out of his comfort zone and record this album in the desert for a month was a pretty massive sign that he was all in.”

As they slip in and out of styles, the band seem comfortable in any skin, working completely in sync, like the footballing philosophy that inspired the album’s rousing opener. What has resulted is an urgent work about letting yourself go amidst a storm of terribleness. Despite everything, while the album plays, we can enjoy ourselves.

Wide Awake! was released on 18 May via Rough Trade