Manchester's iconic Albert Hall is set to host a People's Concert this November, celebrating 100 years as the city's much-loved institution for music lovers both past and present.

Paying homage to a special concert that was held exactly 100 years ago, just after the former Wesleyan chapel had been transformed into a concert hall, the night will feature a mix of popular modern day artists, bands and DJs, including headliners British Sea Power. They'll be joined by Oli Bayston's Boxed In, BBC Radio 6 DJ Marc Riley, Manchester’s art-popologists Dutch Uncles and Mercury Prize-nominated brothers Field Music, with more acts yet to be announced – there's a promise of a twist in the mix from one of Manchester’s home grown DJ talents.

Headliners back in 1917 were The Famous Range Concert Company, with an admission price of two pennies. Guests were also treated to a troupe of classical singers and an accompanying orchestra, as well as 'humorous entertainer' Mr Arthur Newton.

Ade Dovey from Albert Hall said: “It’s wonderful that this important piece of memorabilia has resurfaced and found its way back home to Albert Hall, giving us a nostalgic look into how the venue was originally used.

"With our modern day version of the event, we hope to revive the spirit of the concerts of old by bringing together a much loved curation of bands to really celebrate over 100 years of the Albert Hall being Manchester’s favourite music venue.” 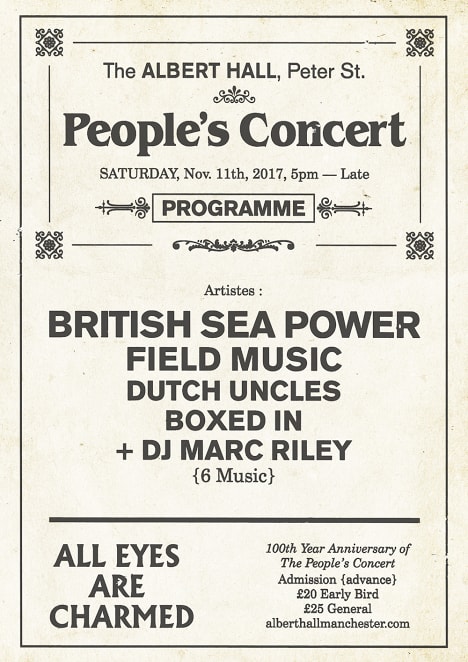